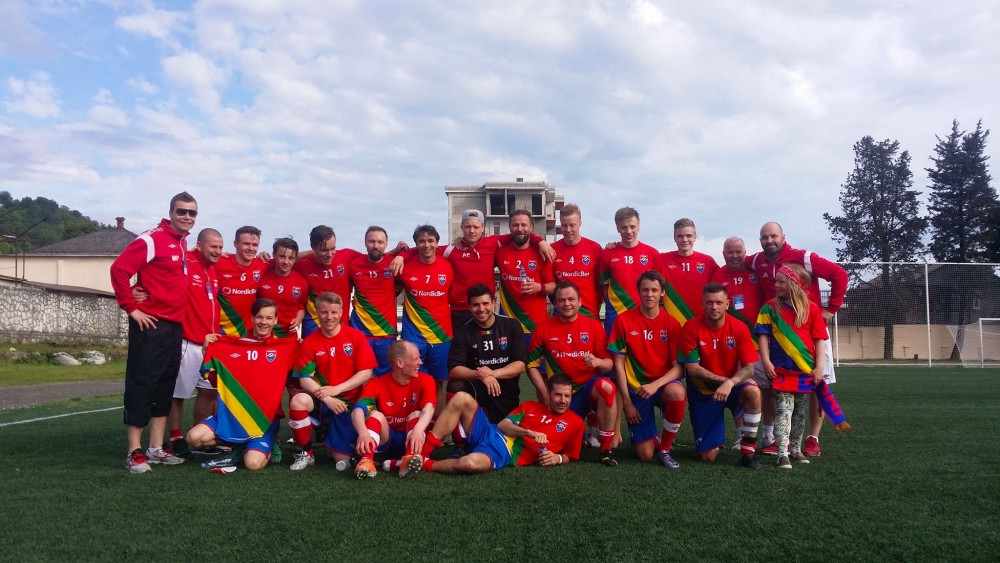 The team of indigenous players from the North will travel to one of the most tense hotspots in Europe to meet breakaway rebels from Luhansk.
Read in Russian | Читать по-русски
By

It is a very long way from the quiet and wide-stretched Sámi lands in northern Scandinavia to the land-locked pseudo-republic of Artsakh.

The disputed de-facto region located between Azerbaijan and Armenia in the southern Caucasus is the host of this year’s European Football Cup, an event organised by CONIFA, the so-called Confederation of Independent Football Associations.

For most people, the region is better known as Nagorno-Karabakh, the area that went through an intense and bloody war in the early 1990s and since has been the epicentre of Azerbaijani-Armenian tensions. In this region, there is constant fear of renewed clashes in the air and shooting between the sides takes place on a regular basis.

It’s football, and it’s politics. No UN state has recognised the Republic of Artsakh and the visits of footballers from Scandinavia and other regions is surely seen by local authorities as a friendly clap on the shoulder.

However, the host region for the tournament is far from the only controversial part of the program. Among the teams participating is a string of the most conflict-prone areas in the world.

The Sámi team, which includes mostly Norwegian citizens but also players from Sweden and Finland, has in its Group A not only the Republic of Artsakh itself, but also the People’s Republic of Luhansk, the east-Ukrainian rebel region that is heavily supported by Russia.

Following the Russian annexation of the Crimea in February 2014, Russian-backed forces entered bigger parts of eastern Ukraine and took control over the districts of Donetsk and Luhansk. Several thousand people died in violent clashes, and conflict continues to this day.

Leader of the Luhansk Football Association is Manolis Pilavov, the Mayor of Luhansk City.

Leader of the Sámi Football Association, Håkan Kuorak from northern Sweden says in a comment to the Barents Observer that CONIFA considers it safe for players and participants to go to Artsakh.

Participation in the tournament is necessary if the team is to participate in the bigger CONIFA World Cup, Kuorak makes clear.

«In order to participate in the CONIFA World Cup in the future, where teams from the whole world take part, the FA Sapmi needs to take part in the CONIFA continental championships.» He does not comment on question about the meeting with Luhansk.

The Barents Observer has not succeeded in getting a comment from the Sámi team’s coach, Isak Ola Hætta.

Also the People’s Republic of Donetsk is part of the tournament. Like Luhansk, Donetsk was taken over by rebels in 2014 and is today run as a de facto state supported by nearby Russia.

On the list of participants are also South Ossetia and Abkhazia, two regions internationally considered still part of Georgia but today run as not recognised de-facto states.

The Sámi national team is the only team from northern Europe that take part in the tournament. In previous years, also teams from Greenland and Skåneland, Sweden, have taken part. Only 12 teams are on the list of participants.

The European Football Cup takes place in the period 1-9th June in the city of Stepanakert, the regional capital.

The CONIFA was established in 2013 and has since been headed by Per-Anders Blind, a Sámi man from northern Sweden. The CONIFA president has not responded to a request for a comment to this report.