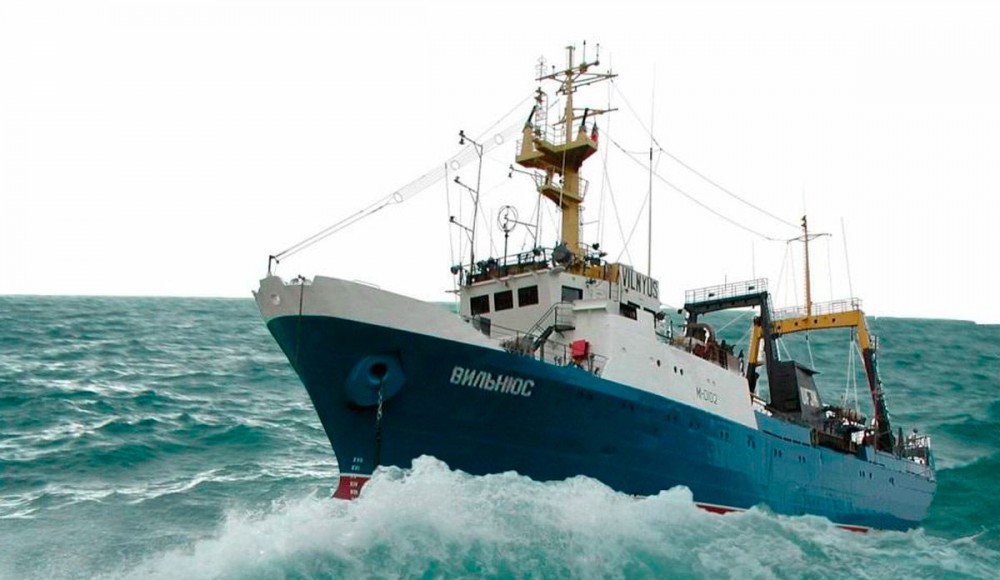 The run-down «Vilnyus» was last fall deemed unfit for service. Still, the ship is Russia’s contribution to this year’s comprehensive ecosystem research cooperation in the Barents Sea.
Read in Russian | Читать по-русски
By

Norwegian and Russian marine researchers have kickstarted this year’s major joint ecosystem mapping in the Barents Sea. Ships on Wednesday set out with course for the waters that are of great importance for both countries’ fishing industries.

In the course of the next six weeks, the researchers will carry out major ecosystem mapping all over the region. It is the 15th expedition of the kind, and results will be of big importance for the quota advices later to be discussed in the Joint Norwegian-Russian Fisheries Commission.

«The Barents Sea is undergoing big changes and it is therefore important that researchers collect as much information as possible about these rich waters,» says Erik Olsen, expedition leader from the Norwegian Institute of Marine Research.

Ever since the joint ecosystem mapping started in 2004, three Norwegian research vessels have covered the Norwegian side of the Barents Sea, while one Russian vessel has done the measurements on the Russian side.

The collected data have shown how fish stock move further north because of climate change and how the ice-covered Arctic is rapidly shrinking, the Institute of Marine Research underlines.

But this year’s ecosystem mapping might not run smoothly.

From the Russian side, it is the 35 year old ship «Vilnyus» that will take part. The ship that is owned and managed by Murmansk-based marine research institute PINRO, has contributed to the expeditions for a number of years.

During the expedition, the ship got a technical breakdown and was not able to complete its tasks.

It became the first year without complete ecosystem mapping in the Barents Sea. Representative of the Norwegian research community did not conceal their disappointment.

«This is very unfortunate,» expedition leader Georg Skaret told the Barents Observer. «It means that we will have a gap in the time series.»

The Russian researchers involved in the mapping were equally frustrated. Following the failed expedition, a representative of Pinro made clear that the «Vilnyus» will hardly be capable of meeting objectives in future operations.

«For the future, I see only one solution - and that is a bigger participation of the Norwegian vessels. After all, they have the opportunity to cover also the Russian zone,» researcher Dmitry Prozorkevich said in a meeting with the Norwegians.

«If we are to continue this kind of research in the future,» he added.

Research Director at the Norwegian Institute of Marine Research Geir Huse later that same year confirms that his institute will apply for permission to enter Russian waters during next year’s ecosystem expedition.

In a meeting with Russian Fisheries Agency leader Shestyakov in mid-October, the two sides signed a protocol which underlines the importance of comprehensive ecosystem mapping of both the Norwegian and Russian sides of the Barents Sea.

The situation for the run-down vessel did not get better when a fire broke out onboard in November the same year. Flames destroyed the ship’s freezing and storage chambers, as well as the fish processing unit. It happened while the ship was at port in Murmansk.

According to Research Director Geir Huse, the «Vilnyus» has undergone upgrades and is reported to be fit for operations.

He makes clear that he has no reason to believe that the ship will not be able to carry out its part of the mapping. At the same time, he confirms that both countries have agreed to apply for access to each other sides in case there will be problems with the involved vessels.

The joint Barents Sea expeditions are considered among the world’s most comprehensive mapping of its kind. All parts of the sea are studied, from the bottom to the top. Research measurements are made on several hundred predefined points all over the area, from the coastal waters along Finnmark and the Kola Peninsula to the ice edge up to 80 degrees north.

A big number of marine species are mapped, water samples and sediment tests are taken and also pollution tests and micro plastic tests are made.

The data collected during the expeditions are of key importance for the recommendations subsequently discussed at the Joint Norwegian-Russian Fishery Commission, the annual top fisheries meeting between the two countries.