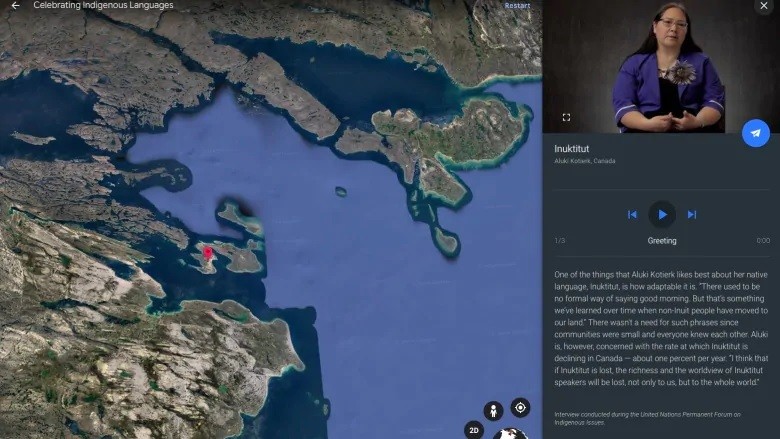 Users of Google Earth will be able to explore a new layer and hear over 50 Indigenous languages from across the globe, learning words and simple phrases like greetings as well as listen to traditional songs. Photo: Google

Hear Indigenous language speakers from around the globe through Google Earth

Users of Google Earth are now able to hear over 50 Indigenous language speakers from across the globe saying words and simple phrases and even singing traditional songs.
Read in Russian | Читать по-русски

For Indigenous people, language is a lifeline to culture.

“It’s my identity. It’s who I am as a person,” said Dolores Greyeyes Sand, a Plains Cree language teacher from Saskatchewan who contributed to the project.

“It lets the world know that yes, we’re here and we have our own ways, language, culture, traditions and world view which are as valid as any other language group in the world.”

When users visit Google Earth, they will be able to select locations chosen by the speakers featured in each area.

During the process of collecting interviews and samples of the languages, each speaker was asked to think of a place that was important to them and their family.

For some this was the community they grew up in. For others like Sand, the place was special because of family gatherings and memories.

Sand chose Crown Hill near Muskeg Lake Cree Nation, where for five generations her family has been tobogganing every New Year’s Eve, completing the night with fireworks at midnight.

Available in Voyager on Google Earth

The project can be found in Voyager on Google Earth, an educational storytelling platform.

While there are almost 7,000 Indigenous languages worldwide, this project features only 50 so far, but Seamster said there’s hope the project will grow if more people are interested in adding their own languages.