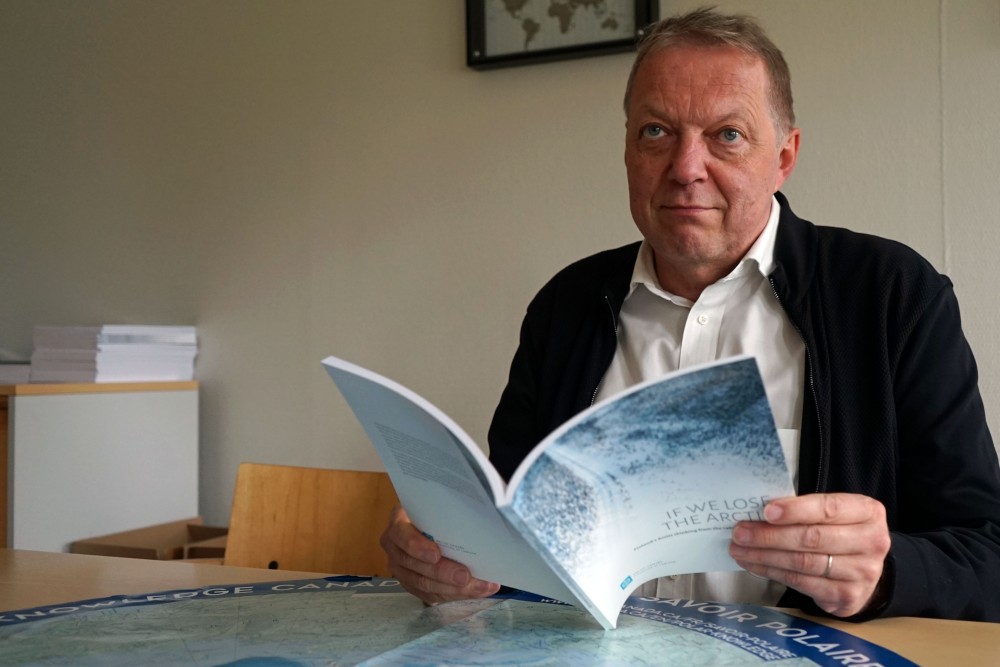 Markku Heikkilä is Head of the Science Communications unit at the Arctic Centre, University of Lapland. Photo: Thomas Nilsen

«This is really a downscaling of the Barents cooperation,» says Markku Heikkilä about the upcoming foreign ministers meeting in Umeå which is co-arranged with the much larger EU Arctic Forum. Russia's Sergey Lavrov is not coming.
Read in Russian | Читать по-русски
By

Reading the two programs of the high profile meetings in Umeå, northern Sweden, the Barents Ministers’ session appears like a side-event as the European Commission launches a broader two-days discussion about the future EU Arctic policy.

This is the first time in the 26-years history of the Barents cooperation that a ministerial meeting is co-arranged with another multilateral political event.

«I see mentions of EU Arctic Forum here and there, but I have heard almost nothing about the upcoming Barents ministerial,» says Markku Heikkilä.

He has for several decades followed the ups and downs of international Arctic- and Northern cooperations, first as a journalist, now as a book-writer and Head of Science Communications at the Arctic Centre in Rovaniemi.

«In the bigger picture, the Barents is disappearing,» Heikkilä says about what now happens.

The EU Arctic Forum is jointly organized by the European Commission, the European External Action Service and the Swedish Government. Some 500 participants are expected, including seven foreign ministers and two EU commissioners.

Crown Princess Victoria of Sweden will be first on stage at the event where international cooperation, environment, businesses, infrastructure and indigenous peoples are on the agenda.

Heikkilä says it looks like Barents has been overrun by the rise of Europe’s attention to the Arctic affairs.

«The European Commission is one of the funding members of the Barents cooperation, so it is a bit strange. I don’t know the reasons for that but it is a kind of symbol of how things are now. Arctic is a much sexier word, Barents is not.»

Press Officer with Sweden’s Ministry of Foreign Affairs, Buster Mirow Emitslöf, refutes that Barents is put in the shadow.

«It’s two entirely separate events. Barents Euro-Arctic Council is an intergovernmental organization with an established agenda and the EU Arctic Forum is a high-level conference with a broad stakeholder participation to highlight challenges and opportunities in the Arctic region,» Mirow Emitslöf explains.

He says they are arranged on the same date and place to maximize attention to key issues of the north. «Climate change is a key issue and will be discussed in both events.»

Lavrov is not coming

Nevertheless, it’s no secret that relations between Russia and the European Union are in deep crisis, although some member countries recently have called for efforts to improve ties.

With exceptions of the first few years in the 90ties, the Barents ministerial meetings are bi-annual.

The foreign ministry in Moscow has not replied to questions from the Barents Observer about the matter.

Markku Heikkilä says much of the reason for less focus on regional Barents cooperation has to do with developments in Russia in recent years.

«There was always considerable uncertainty about the direction Russia was heading towards. Not a single speculation however mentioned a future marked with sanctions, counter-sanctions and undertones of the Cold War.»

From the start, the Barents cooperation was designed for two pillars; the regional level and the state level. Regional contacts today are mostly between northern Norway and the northern regions of Russia.

«Part of the internal developments in Russia has been to reduce the powers in regions and move decisions to Moscow,» Heikkilä writes in his latest book about Finland’s Arctic thinking from the 1980s to present day.

He points to the fact that in Russia, the regional cooperation has been restricted to official structures and its contacts to external companies and civil society have diminished.

Markku Heikkilä says the wordings used is an example of where focus is heading.

«Earlier, everyone was talking about the Barents Region, a Barents identity and Barents business options. Nowadays we talk about the same northern region with new names and with new thought patterns. The term Arctic Europe has appeared and it usually means the northern parts of Finland, Sweden and Norway,» Heikkilä tells and concludes:

«At this stage, Russia is omitted or left out of the analysis: it is not considered a part of Arctic Europe.»

«The Barents cooperation is one of the only forums in the Arctic region that genuinely includes the local regions. Cross-border connections exist on a local level and authorities know each other. Even though the actions might seem invisible to the citizens, the routine communications have value, especially at a time when creating connections across borders is more difficult,» Heikkilä argues.

At the meeting in Umeå on Thursday will Sweden hand over the chair of the Barents Council to Norway for the coming two-years period.

You can help us report about the Barents cooperation…