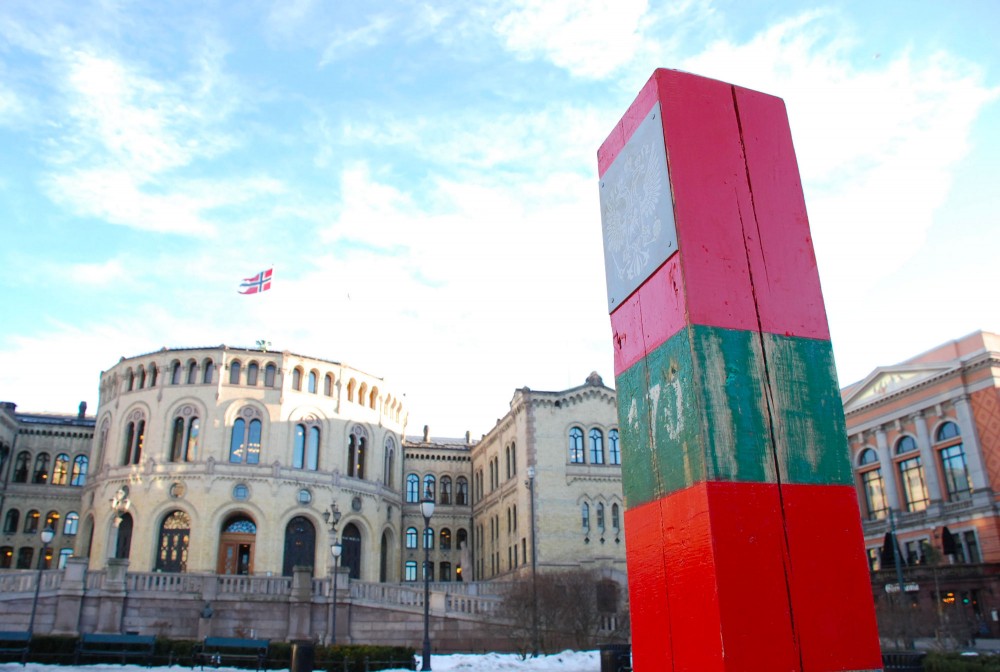 In 2011, Norwegian and Russian border poles were erected in downtown Oslo as part of an art project. Including in front of the Norwegian Parliament, the Storting. Photo: Atle Staalesen

Judging from the press service of the Federation Council, this week’s meeting with Norwegian Ambassador to Russia Rune Resaland was not not held in the best of spirits.

The Norwegian top diplomat was told that Norway carries the full blame for the degraded bilateral relations between the two countries’ parliament assemblies.

There can be no normal cooperation between the two countries’ parliaments before the Norwegians offer an official apology for the detention of Mikhail Bochkarev, Chair of Council’s Foreign Relations Committee Konstantin Kosachin made clear for the ambassador.

According to Kosachev, the detention of Bochkarev during his visit to Norway in October last year was «provocative and unlawful.»

«Mikhail Bochkarev has still not gotten an apology, nor an explanation of the situation from the Norwegian side,» Kosachev told Ambassador Resaland. «In the Federation Council, we do not understand the reasons for the silence from the Norwegian Storting,» he added.

The committee leader underlined that «the Russian members of parliament do not consider this issue closed.» Mikhail Bochkarev was himself present in the meeting.

Bochkarev was detained by Norwegian police in connection with his participation in a seminar organized by the European Centre for Parliamentary Research and Documentation (ECPRD) in September 2018. The event had 79 participants from 34 countries and took place in the premises of the Norwegian Parliament, the Storting.

The participants were all administrative employees from different European Parliaments. Bochkarev was suspected for having engaged in illegal intelligence-gathering during the event. He was released after almost a month in detention.

The detention came only few months after the Russian Security Service (FSB) had arrested Norwegian citizen Frode Berg and charged him with espionage. Some believed Bochkarev potentially could be swapped with Berg in a deal between the countries.

According to Konstantin Kosachev, the Norwegian detention of his colleague Bochkarev must be considered a provocation by the country’s special services.

It takes place on the backdrop of what he calls an «anti-Russian hysteria in certain parts of the Norwegian media and the political establishment.»

He also underlined that Norway’s association with the EU and its sanction regime against Russia, as well as its «active participation in NATO activities in areas near the Russian border» makes it impossible to speak about a thaw in bilateral relations.

«All up to Norway»

It is all up to the Norwegians to restore relations, the leader of the foreign relations committee stresses.

«We are ready to revive dialogue with the ones of our Norwegian colleagues that are interested in such,» he underlined.

«We consider that it still can play a very important role in the development of constructive, positive bilateral relations that are of mutual benefit,» he added and stressed that he now expects «a comprehensive, clear and satisfactory reaction from the Norwegian Storting.»

According to the press service of the Federation Council, Ambassador Resaland in the meeting highlighted the importance of good neighborly relations with Russia and pointed at the joint interests of the two countries in fields like fisheries, environment, search and rescue, nuclear safety, as well as cross-border cooperation.

He reportedly also said that political contacts between the sides are starting to revitalize.

The Norwegian Parliament (Storting) has for a number of years cooperated with the Federation Council, the upper chamber of the Russian parliament. In June 2018, a Norwegian parliament delegation paid a visit to Moscow and met with Kosachev and his Foreign Relations Committee.

The same parliament delegation was to visit Moscow also in early 2017. Then, however, the visit was cancelled after two Norwegian MPs were rejected entry to Russia.

It later turned out that the two politicians had been placed on Russia’s so-called stop list of unwanted individuals in the country. Among them were Trine Skei Grande, the current Norwegian Minister of Culture.

According to Skei Grande, she has not gotten any explanation from the Russian side why she is on the sanction list.

«It is unacceptable that they give no reason why exactly we are on this list,» she told newspaper VG.

Cross-border cooperation is the way to go, Valentina Matvienko says in Murmansk