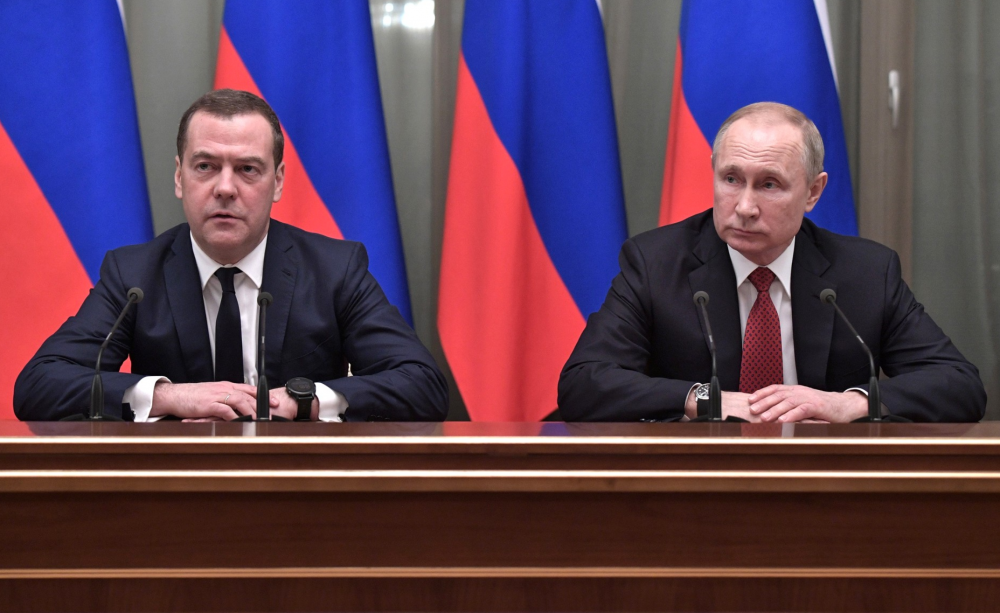 Dmitry Medvedev announces his and the government's resignation in a meeting with Vladimir Putin on January 15th. Photo: Kremlin

Will Putin stay or will he go? Bombshell address and shock Medvedev resignation offer big hint

Real and proposed changes to the structure of the Russian government shine a light on Vladimir Putin and the country’s futures.
Read in Russian | Читать по-русски
By

For over an hour, President Vladimir Putin’s annual state-of-the-nation speech on Wednesday sounded just like those that had come before it.

And, not for the first time, Prime Minister Dmitry Medevev had trouble staying awake.

Soon, however, he would be jolted upright.

Near the end of the 80-minute address, Putin began outlining a raft of proposed changes to the country’s Constitution. Then, three hours after the conclusion of the speech, Medvedev sent additional shockwaves through Russia’s political elite with an announcement on live television that he and his entire government would be resigning.

With Putin in the midst of a second consecutive presidential term that will come to an end in 2024, speculation has been swirling over whether he will attempt to extend his stay in power and how, given that the current Constitution limits presidents to two consecutive terms.

That speculation has now reached fever pitch, with observers wondering whether the next prime minister will be Putin’s successor. Putin himself was named prime minister by then-president Boris Yeltsin in 1999 before taking his place the following year.

One of the options floated in Moscow in recent months was that Putin would propose to change the Constitution so that a president could serve for a third consecutive term.

But the Russian leader, who has been in power for the past two decades, appeared to negate that possibility on Wednesday.

“I don’t consider [the two consecutive term limit] a matter of principle, but I agree with it,” he said in the address.

However, that doesn’t mean Putin will leave power in 2024.

Outlining proposals that would strengthen parliament and other government bodies while reducing the powers of the presidency, Putin appeared to be keep various doors open for what position he may take on after leaving the Kremlin, analysts said.

“He gave himself much more room to maneuver,” said political consultant Yevgeny Minchenko.

“The president would be obliged to appoint [the confirmed picks],” Putin said. “He would not be allowed to reject candidates confirmed by parliament.”

He also proposed that regional governors should be more closely aligned with the federal government, and he suggested making the State Council — an advisory body to the president that he established when he was first elected in 2000 — an official governing body.

The amendments — 11 in all, according to a count by the Meduza news outlet — could be put to a vote through a referendum, Putin suggested.

“All of these changes are aimed at reigning in his successor,” said Tatiana Stanovaya, a nonresident scholar at the Carnegie Moscow Center.

After Medvedev’s announcement early Wednesday evening — which came as such a shock to all that not even those laid off knew about it till just prior, one sitting minister told The Bell news outlet — all eyes are on who Putin’s anointed replacement might be.

“It could be his successor or it could just be someone who allows Putin to buy himself time. We have to wait and see who it is,” Stanovaya said.

“But for these constitutional changes to be made, Putin needs support. And Medvedev had become too toxic,” she added, referring to the prime minister’s low trust ratings.

Medvedev himself noted that “the balance of power” will change following the amendments to the Constitution, the state-run TASS news agency quoted him as saying.

“In this context, it is obvious that we, as the government, should provide the president of our country with the ability to make all necessary decisions for this,” he said.

As for what landing spot Putin may be eyeing for himself, Stanovaya predicted that he will choose the State Council.

The body, she said, has the opportunity to bring under it various institutions at all levels, “from governors, to the presidential administration, to ministers to siloviki” — officials with ties to law enforcement.

“He would have a lot of control while also freeing himself from day-to-day problems,” Stanovaya said.

“But of course,” she added, “right now we are just left to guess.”

For his part, political scientist Dmitry Oreshkin reckons that Putin is targeting a return to the role of prime minister, which he took on in a swap with Medvedev in 2008, the last time he had to sidestep the constitutionally mandated two-term limit.

Regardless, Oreshkin believes Putin is readying a successor to take his place while he remains in control from behind the scenes.

“It doesn’t matter what his last name is,” he said. “But he will be another Medvedev.”