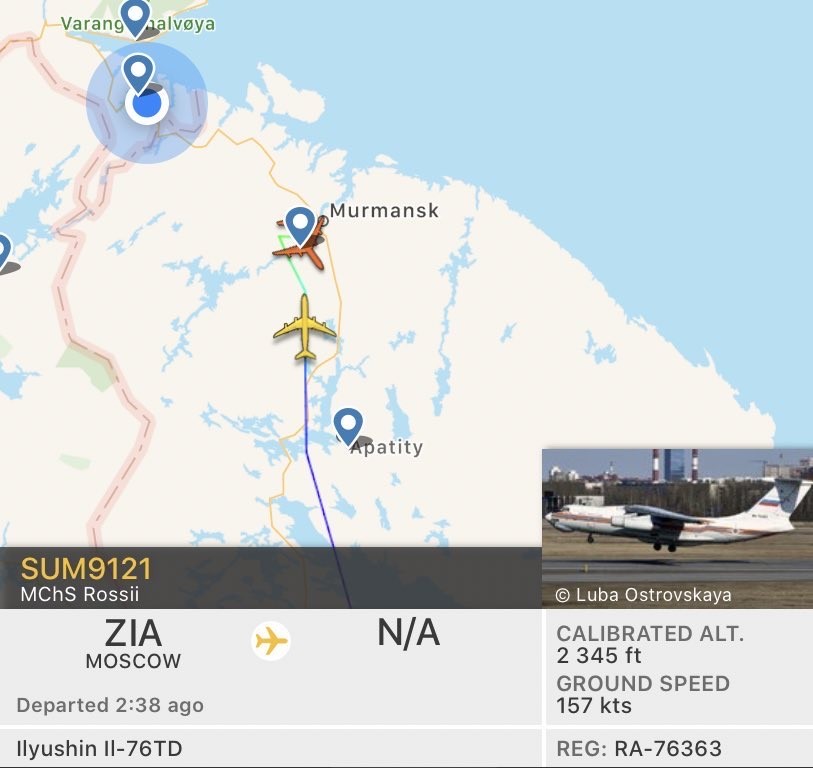 Two Il-76 transport aircraft from the Ministry of Emergency situations in Moscow landed at Murmansk airport around noon on Sunday. Screenshot from Flightradar24

Thousands of workers are isolated at Belokamenka construction site north of Murmansk where municipal authorities declared emergency Saturday evening in an attempt to hinder further outbreak of coronavirus.
Read in Russian | Читать по-русски

The emergency order was signed by the head of Kola municipality and stipulates how to keep control of the coronavirus outbreak and ensure that construction work at Novatek’s Kola Yard can continue.

Newspaper Murmanski Vestnik reports that there are about 11,000 workers at the construction site where Novatek builds a supply base for its Arctic LNG projects on the Yamal Peninsula and in the Gulf of Ob.

Most workers at Belokamenka are fly-in-fly-out employees, including thousands of migrant workers living in the barracks on site.

Belokamenka is on the west side of the Kola Bay, about an hour’s drive from Murmansk.

Around noon on Sunday, two huge Ilyushin-76 transport planes from Russia’s Ministry of Emergency situations landed at Murmansk airport. According to the blog-site mmk.news, known for monitoring air traffic to Murmansk, the two planes arriving from Zhukovksy airport outside Moscow, were carrying medical equipment.

Online news site B-Port reports that the two planes bring a medical facility aimed at the settlement Mezhdurechye near the construction site in Belokamenka. Five trucks with a mobile hospital and doctors are said to arrive with the planes.

Murmanski Vestnik, which is the regional authorities’ official newspaper, says there are workers at Belokamenka infected by the coronavirus. No numbers, though, were given.

Novatek itself has not posted any information about the isolation regime at Belokamenka.

Kola municipal authorities have established an emergency headquarter working round-the-clock to oversee the situation and control the sanitary situation.

All transport of people and cargo in-and-out of Belokamenka construction site is strictly monitored.

The number of confirmed coronavirus cases in Murmansk nearly doubled from Saturday to Sunday, the Government of Murmansk’s official site informs. Over the past day, 61 people confirmed positive test results for coronavirus, bringing the total number in the region up to 128 people.

118 of them are receiving treatment at hospitals in different cities on the Kola Peninsula.

By April 12, the number of coronavirus cases in Russia is 15,770, which is up 2,186 from the day before. That is the highest day-by-day increase in Russia so far, the official portal Stop Coronavirus informs.