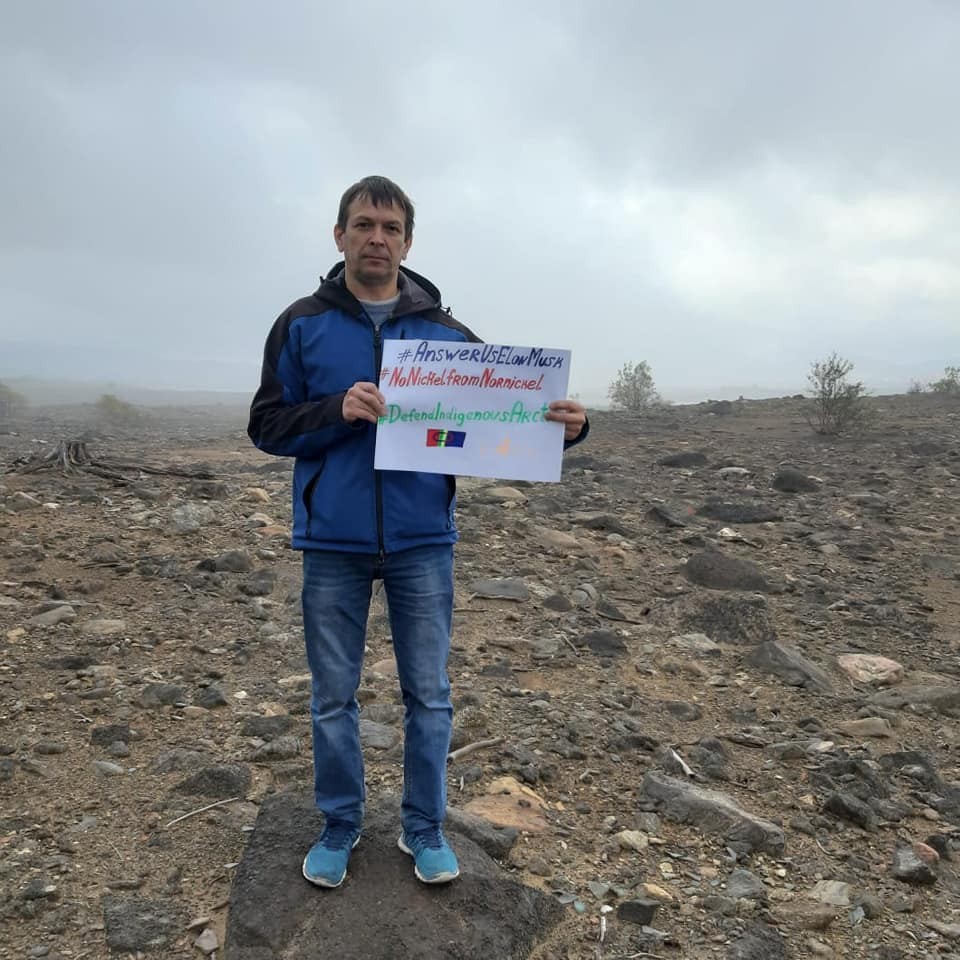 Andrei Danilov stands in the ecological disaster zone near Monchegorsk, holding a poster urging Elon Musk to answer the call from indigenous peoples of the Russian north not to by metals from Nornickel. Photo: Private

"The factory has forever ruined what used to be the beautiful tundra here in Monchegorsk," says Andrei Danilov, a Sámi from Russia's Kola Peninsula.
Read in Russian | Читать по-русски
By

“We are respectfully requesting that you DO NOT BUY nickel, copper and other products from the Russian mining company NorNickel until the following is implemented,” the letter continues and then lists a number of environmental requirements to be fulfilled on the Taimyr- and Kola Peninsulas.

The campaign that started in northern Russia is now spreading in social media by other indigenous peoples communities globally under the hashtag #AnswerUsElonMusk.

The Saami Council this week voiced a strong support to the campaign.

The  Council represents the Sámi people in northern Scandinavia and on Russia’s Kola Peninsula.

President of the Council, Christina Henriksen, grew up in Sør-Varanger, the Norwegian border municipality with the smoke from NorNickel’s smelter in the horizon on the Russian side of the border river.

“Witnessing the devastating impact on the surrounding environment, and living close to the Nornickel plant in Murmansk Oblast, has been, and is, a constant reminder of the threat the emissions expose to the communities, harvesting from nature and breathing the polluted air,” Henriksen says to The Barents Observer.

“Emissions know no borders, and communities in three countries are affected by this company’s activities and lack of will to take action in regard to environmental standards and human rights,” she says.

With mines and metallurgical factories one the Taimyr Peninsula and in the Murmansk region, Nornickel is the world’s largest nickel producer and ranks among the top ten copper producers. It also produces cobalt. All three minerals are important components in the current booming battery production for electric vehicles.

Tesla’s Elon Musk recently called on miners to produce more nickel. “Tesla will give you a giant contract for a long period of time if you mine nickel efficiently and in an environmentally sensitive way,” he said in a plea to mining companies quoted by Bloomberg.

It is about 75 kilograms of nickel in an average Tesla Model S battery pack. The metal makes batteries energy dense so vehicles can drive further on a single charge. Tesla sold 367,500 cars last year and production is ramping up with new factories in China, Germany and Texas.

Other carmakers, like VW, BMW, Hyundai and others, are all rushing to secure raw materials for battery cars believed to count for millions of new vehicles annually within the next few years.

Several of Nornickel’s smelters are located in Monchegorsk on the Kola Peninsula. This summer, the surrounding nature has been covered by smog containing sulfur dioxide and heavy metals.

The paradox, Andrei explains, is the name of the city; Monchegorsk. “It comes from the Saami word Modzhes Char, which means beautiful tundra.”

“It hurts to watch the once beautiful places are spoiled by industry, making it impossible to engage in traditional activities there. The factory has forever ruined it,” Andrei Danilov tells to The Barents Observer.