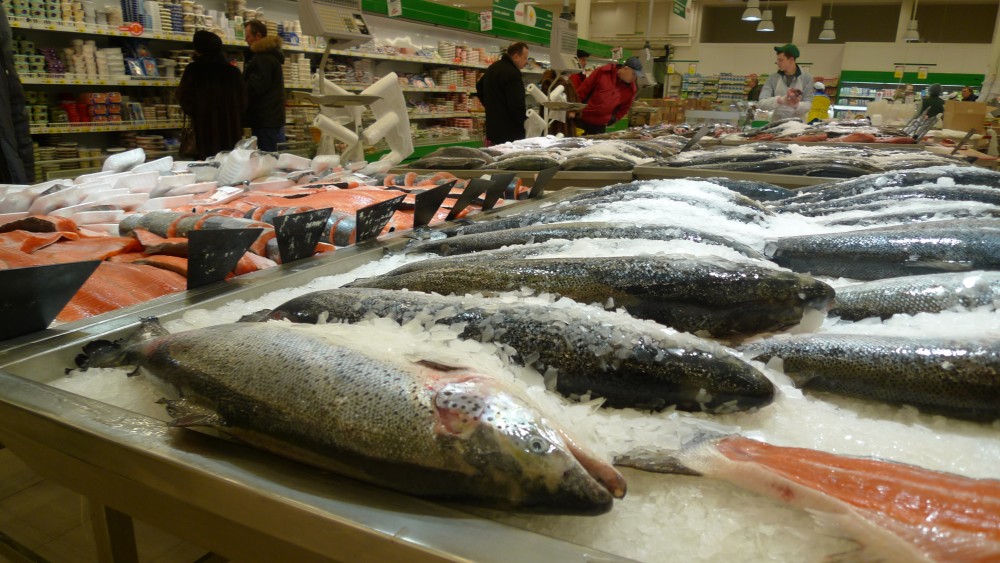 Salmon and trout on sale at a supermarket in Murmansk. Photo: Thomas Nilsen

Block on European imports could also be prompting a surge in re-exports from Belarus, China and South America.
Read in Russian | Читать по-русски
By

Moscow’s high-profile drive to cut food imports — supported by Russia’s counter-sanctions on Europe — is not increasing the country’s agricultural production to the extent authorities had hoped, a new report has found.

Meanwhile, the food embargo — outlawing the import of European foodstuffs and introduced in response to Western sanctions against Russia for annexing Crimea — continues to distort trade and could be leading to mass re-exporting from countries as far away as South America, a new report by the National Rating Agency, cited by Kommersant, has found.

Russia’s imports of the products targeted under the scheme have fallen over the last seven years, analysts said, but the country’s domestic production has failed to increase as much as initially hoped, meaning the Kremlin is set to fall short of its 2020 targets for the program.

Experts have long said the embargo on EU products has led to re-exporting — where a firm in a non-EU country buys goods from Europe, repackages them as produced in their country and sells them onto the Russian market. Belarus — which has a customs union with Russia — is seen as the prime example.

The new data shows that Minsk is increasing its share of Russia’s food imports. Belarus now accounts for 79% of all Russia’s dairy imports — up from 43% in 2013. It also accounts for almost a third of all meat imports, up from 12%.

But the analysts also found the re-exporting scheme could involve countries much further afield.

Before the embargo, Russia’s top trade partner for fish was Norway, which accounted for 40% of all imports. By 2019, Chile and the Faroe Islands had jumped into the top spots — from previously having sold virtually no fish to Russia. Since 2013, Chile has increased its own imports of Norweigian fish three-fold.

Similarly, Ecuador has become one of the top fruit sellers to Russia — making up 22% of all Russia’s imports. Over the same period, Ecuador increased its EU fruit imports seven-fold — with the country’s imports now standing above domestic consumption levels, Kommersant reported.

A similar distortion could be occurring with Moscow’s trade partners in the East, the data showed. China, for instance, now accounts for 21% of Russia’s vegetable imports, up from 8% before the food embargo was introduced. Over that time, Beijing has tripled its own vegetable imports from the EU.

Serbia, Moldova and Azerbaijan were among the other countries experts told Kommersant appeared to be involved in re-exporting to Russia.