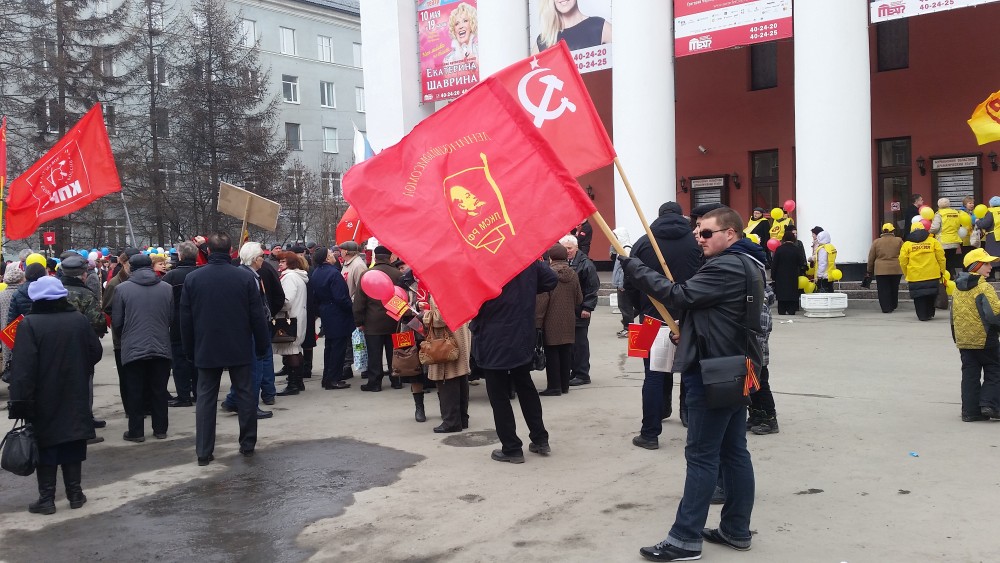 1st of May Communist rally in Murmansk. Photo: Thomas Nilsen

68 years after his death, Josef Stalin could make a comeback to Russia's Arctic capital where the location of his bust now is debated.
Read in Russian | Читать по-русски
By

“He has always been distinguished by his sincere love for Russia, personal modesty, the highest intellect, exactingness and high level of efficiency,” writes Kolsky Mayak, the regional Communist newspaper in the Murmansk region in a lengthy article arguing the need for erecting a Stalin bust in the city.

Several of the region’s leading political figures, among them Pavel Sazhinov who for years had a seat in the regional parliament, has signed a call to honor Stalin appropriate.

“Stalin paid special attention to Murmansk,” Sazhinov argues, pointing to the 1932 USSR resolution on the prospects of development of Murmansk and its railway.

In 1933, Josef Stalin visited Murmansk and in the following years, the city became Russia’s biggest north of the Arctic Circle.

“Under the leadership of Stalin the Soviet people turned Russia from an agrarian country to a center of advanced world technologies, industrial development and scientific progress,” the arguments in Kolsky Mayak read.

According to the Severpost news portal, the idea on honoring Stalin by erecting a monument gains support among Murmansk citizens.

Under Stalin there was “order and patriotism” in the country, a post in a regional social media platform reads.

Also, the news online notes, “Murmansk residents added it is also worth perpetuating the memory of Leonid Brezhnev.”

Head of Murmansk City administration, Yevgeny Nikora, says the proposal will be considered, although he himself is against a Stalin-monument.

“As the head of the administration, I’m ready to consider this initiative… I can’t object this kind of initiative,” he says to Severpost. But Nikora adds: “As a citizen I would not want a monument to a very controversial person in Soviet history to be erected in Murmansk.

Novaya Gazeta can tell that a local artist in Murmansk has already created a clay bust of the Soviet dictator and collection of money for its erection is already in full swing.

The newspaper brings information about Stalin’s terror-regime in the north, pointing to the network of Gulag camps on the Kola Peninsula filled with prisoners working to establish the mining sites in the region.

During the period of political repression on the Kola Peninsula, 1379 people were sentenced to death and another 3055 were sentenced to carious terms. 411 were sent into exile and expelled from the country, according to Novaya Gazeta.

An informal online poll posted on the Vkontakte site by the Arktik-TV shows a 42% support among Murmansk residents to erect a monument to honor Josef Stalin.

After his death in 1953, most Stalin statues around the Soviet Union were quickly removed, so also on the Kola Peninsula where such monuments were prominently placed in Aleksandrovsk, Murmansk, Kirovsk, Revda and other places.

The return of the mass killer is not unique for Murmansk. In 2019, a nation wide survey could tell that 70% of Russians said they believed Josef Stalin had a positive role in the country’s history.

New Stalin memorials are erected in several other Russian cities, among them Arkhangelsk, Novosibirsk and Surgut.

Meanwhile, in Murmansk, the Communist Party invites for a study course on the Marxist method of understanding the world.

The course takes place on Saturday, January 23 at 2 pm.

Coincidentally, the timing is similar to the nation-wide street protest announced in support to Kremlin critic Aleksei Navalny who was arrested at the airport in Moscow on Sunday after his return to Russia from Berlin.

The Navalny protest in Murmansk on Saturday takes place at the Five Corner square in the city center.