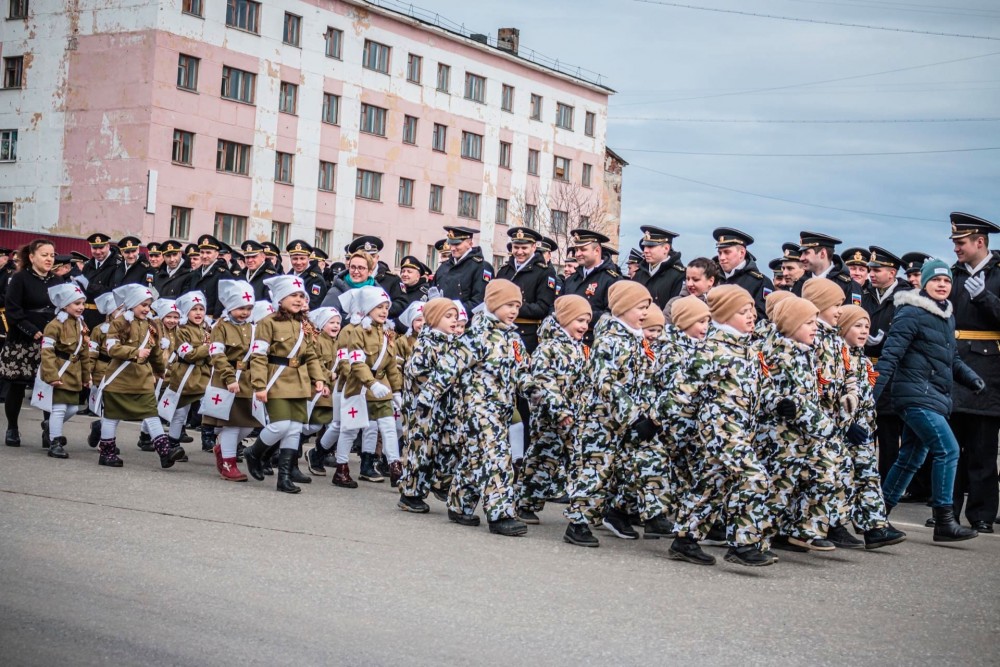 "Patriots must be raised from childhood"

Dressed in military uniforms, preschool kids on Victory Day marched in the streets of closed naval town Zaozyorsk along with submariners and local troops.
Read in Russian | Читать по-русски
By

“The participation of preschool kids in the festive celebrations is an indication that the traditions are not only preserved, but also extended!” leaders of the kindergarten Skazka (Fairytale) in Zaozyorsk say.

“Patriot must be raised from childhood!” they underline.

Children and youth participated in this year’s Victory Day parades across all of Russia. But only few places, they were as young as in Zaozyorsk. Photos and videos from the local 9th of May parade show 30 preschool kids, half of them boys dressed in camouflage uniforms, and the other half - girls dressed as military nurses, march down the local street.

The photos are shared by the local town administration, as well as the regional unit of Yunarmiya, the Russian military youth organization.

According to the kindergarten’s VK page, the kids won the first prize for the best appearance in the parade. During their performance, they song the “Katyusha”, the patriotic and folk-based song that is also a popular military march.

Zaozyorsk is located on the coast of the Barents Sea, about 50 km west of Murmansk City and some 60 km from the border to Norway. The town has a population of about 10 thousand, most of them working for the Northern Fleet. Zaozyorsk houses the Zapadnaya Litsa submarine base, including Russia’s most advanced 4th generation nuclear-powered multi-purpose submarine, the Yasen class.

Zapadnaya Litsa is the Northern Fleet’s westernmost base.

Russia’s military buildup over the last years has been accompanied by growing militarization of the country’s children and youth. The country’s Yunarmiya (Youth Army) now totals more than 800,000 members.

In a previous comment to the Barents Observer, Inna Sangadzhieva, Senior Advisor on Russia and Belarus with the Norwegian Helsinki Committee, said that Yunarmiya feeds children with the rhetoric of war.

“Today, Russia is a kind of hybrid regime where communism is gone, while its militarizing elements remains. Like with Yunarmiya.”

Inna Sangadzhieva explains how the movement, that includes children as young as 11 years old, learn to be patriots, listen to orders without discussion and to be ready to sacrifice their lives.

“Many parents and civil society organizations have, of course, been critical of Yunarmiya. Children get used to the rhetoric of war from an early age, as if it is a part of a preparation for war.”