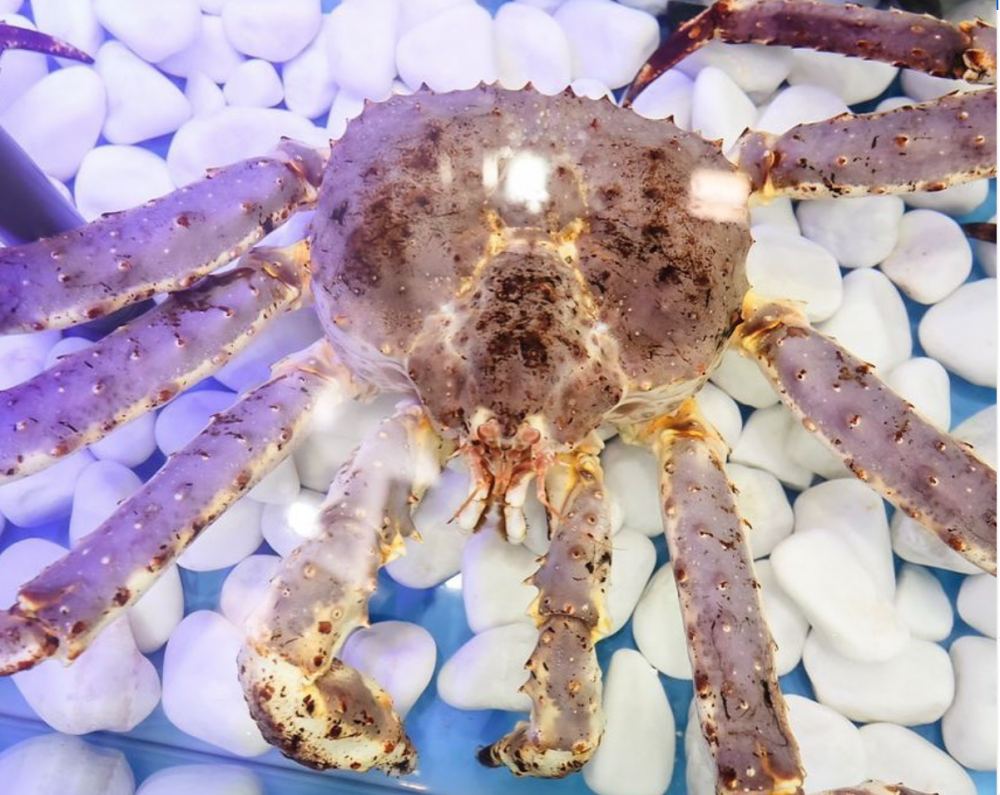 Arguably the most eye-catching feature at St. Petersburg International Economic Forum was the giant King Crab from Murmansk.
Read in Russian | Читать по-русски
By

Yura the crab, on display in a huge aquarium, was a sight beyond any poster or promotion screen. Few could pass by without stopping to take a closer look or a selfie. It brings good investment luck, the delegation of the Murmansk region to Russia’s largest annual business gathering said.

The forum enables international companies, politicians, ministers and heads of state to cross-paths and expand their knowledge regarding how they can utilize practical business tools to overcome both domestic and international geographical and informational barriers.

During the forum, Yura was settled in a large aquarium with other inhabitants of the Barents Sea at Murmansk’s stand. Yura was a hit and attracted a great amount of attention from the participants. However, a source close to delegation from the Russian north assures that Yura’s living conditions during the forum were temporary.

Talking to TASS, he said: “In the near future, Yura, in the most comfortable conditions, will go to Murmansk, where he will be taken care of while we are building a new house for him.” The construction process is estimated to take about a month and a half, after which the crab will move to Teriberka in the Murmansk region.

Yura, is not only a mascot but is also a lucky charm. The crab typically predicts important events for Russia, and more specifically the Murmansk region. Yura predicted that Russia would be the winner of the quarterfinal match of the World Ice Hockey Championship between Russia and Canada by pointing his pincer towards the Russian team. However, Yura’s prediction was false as the match ended in Canada’s win.

After Yura’s unsuccessful forecast, rumors started spreading around about Yura having been eaten due to his inefficiency in predicting the nature of Russia’s future developments. A source reported to Tass that “everything is fine [with Yura the crab], no one ate it.” And that the King Crab “has already denied these rumors on his Instagram account.”

On June 6th, Yura again took to his Instagram to explain his failure in predicting Canada’s win in the hockey match. Yura explicated that sport is not his strong suit, but that he decided to give it a go anyways, which ended in his failure.

However, Yura, in a separate post, explained that he is a great asset in matters he is more knowledgeable about. The crab highlighted that during the business forum in St. Petersburg1, the Murmansk team successfully presented a grandiose new project for the renovation of the industrial territory of the Marine Fleet’s Murmansk shipyard. The creation of a unique urban space, including an international cultural and business center, is also planned. The project will create an additional 3,000 new jobs and is hoped to become an investment and tourism magnet.

Contrary to popular belief, the king crab is not native to the Barents Sea. 1959 marked the first year in which 10 female king crabs caught off the coast of Japan were successfully transported across the former Soviet Union. The crabs were then kept at aquaculture in the Murmansk region before they were released with another five male crabs into the Barents Sea in the following spring. In 1974 and 1977 the first king crabs were respectively caught in the Soviet and Norwegian parts of the Barents Sea. This was a double confirmation of the successful introduction of the species to the sea.

In recent years both Norway and Russia have eased king crab fishing restrictions. In 2017, the Norwegian government eased the regulations for tourist king crab catching, making crab safaris all the more popular in the region. Now individual companies in Norway are allowed to catch up to 500 crabs a month, depending on the amount of visiting tourists.

In Russia, non-commercial crab fishing will be allowed in the Murmansk region from 2021. The Governor of the Murmansk region, Andrei Chibis, stated that Russia will ease king crab fishing restriction. This move will be consolidated by law. Five new fishing sites will be established in the region. Some of them are Pechenga Bay, Teriberskaya Bay, Yarnyshnaya Bay, which are in the area of ​​the Svyatonos Bay in the city of Ostrovnoy, Nord-News reported.