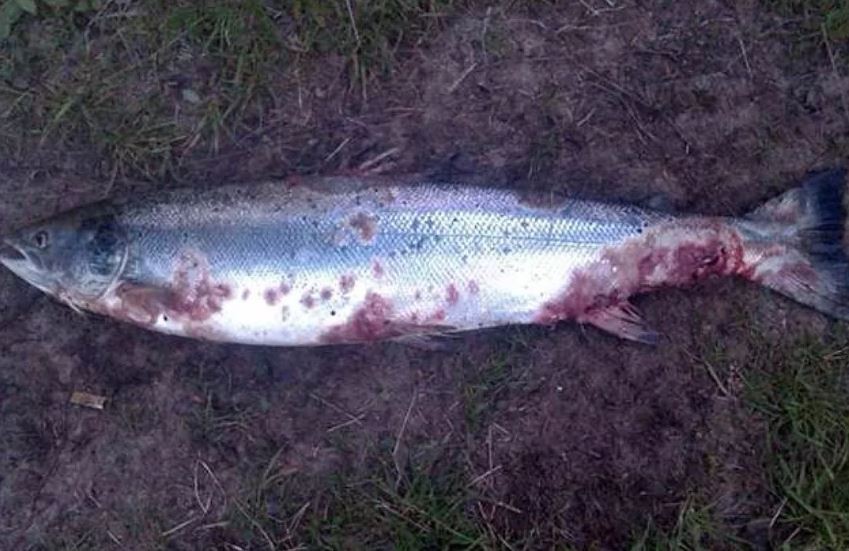 Sick salmon from the Kola River. Photo courtesy of Severpost

Sick wild salmon are found in the rivers Kola and Tuloma on the Kola Peninsula, the Federal Service for Veterinary and Phytosanitary Surveillance reports.
Read in Russian | Читать по-русски
By

After an obvious increase in the cases of sick wild salmon, biomaterial samples of the fish were sent to several leading scientific laboratories in Russia, the Murmansk edition of newspaper Moskovsky Komsomolets reports.

The chairman of the Veterinary Committee of the Murmansk Region also paid a visit to the Nizhnetulomskaya hydro-based power plant (HPP). There he inspected the fish for necrosis and collected more wild salmon samples to run tests on. Regional news online Severpost reports that out of 4,802 salmon caught during the three first weeks of June, 545 were infected.

Researchers with the Veterinary Committe in Murmansk have done a more thorough study of some of the salmon. Based on clinical examination of Atlantic salmon trapped in the fish ladder at the HPP, it was uncovered that 22 specimens of wild salmon show primary signs of necrosis.

“Since July 9, 625 salmon have passed through the fish passage, 22 of them showed primary signs of ulcerative dermal necrosis,” the Committee writes.

In its initial stages, the disease causes gray spots or rings on the body of the fish, which subsequently ulcerate. However, the necrosis can worsen through a secondary infection caused by the saprolegnia fungus, which causes white spots or rings to occur on the fish. From there on, the fish is weakened significantly and typically dies, according to Moskovsky Komsomolets. The disease is not dangerous for humans and affects only wild salmon.

The Veterinary Committee added that “dead fish and fish affected by saprolegnia were not found” at the Nizhnetulomskaya HPP.

The issue of disease-ridden wild salmon populations has plagued the Kola Arctic for the past five years. This problem, amongst others, was discussed at a meeting between the Governor of the Murmansk region, Andrey Chibis, and a representative of the Federal Service for Veterinary and Phytosanitary Supervision, Konstantin Suvorov.

Andrey Chibis and Konstantin Suvorov underlined that based on further and more in-depth results from the tests run, they will devise a plan of action to hopefully save as many salmons as possible and stop the spread of the disease.

As of now, it is uncertain what is causing the salmon to develop necrosis. The Veterinary Committee of the Murmansk Region reports that in the meantime further tests are being run on water and soil samples from the Tuloma River to hopefully uncover the underlying reasons for the increase in the cases of the disease.

Specialists from the regional state veterinary service continue to monitor the epizootic situation in the Murmansk water bodies.