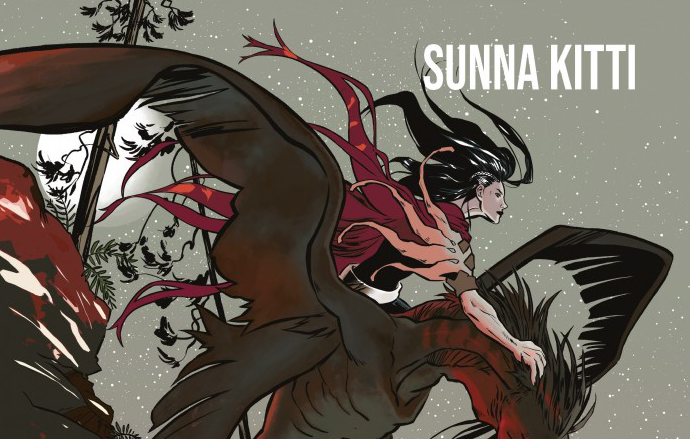 During the extraordinary year 2020, Sunna Kitti finished her nearly six-year long project of crafting her graphic novel, Jiehtanasa Iđit (Morning of the Giants). Delayed slightly by studies and work, the North Sámi illustrator’s first full length novel has been welcomed in the community with open arms.
Read in Russian | Читать по-русски
By

The novel has a unique place in Sámi arts -  it is the first full-length graphic novel made by a Sámi artist, for the Sámi audience and the original language is Northern Sámi. There are shorter strip comics published in Sámi languages, but Kitti’s focus is on longer novels with a strong narrative.

“I did not think that I could actually make a graphic novel, because I had the thought that it is a difficult industry - which is true,” Kitti explains. The past years have not been great for publishers — many of the festival’s where graphic novels would be sold and advertised have been cancelled, leaving many publishers struggling with sales. Having one’s graphic novels published is a feat on its own, but Kitti’s hard work has paid off. As a multi-talented artist, she is able to illustrate the whole novel as well as write the manuscript.

Kitti decided to draw inspiration from an old Sámi folklore story that was amended to written form by Anders Fjellner in the 19th century. Beaivvi Bárdni (eng. Sámi Son of the Sun), tells the story of a young Sámi boy who visits the land of the giants. The boy falls in love with a daughter of a giant, who he then marries. According to the folklore story, children of the sun are the ancestors of the Sámi people.

Rather than render the original story to graphic novel form, Kitti decided to make her own twist to it. Jiehtanasa Iđit follows the story of a descendant of the Beaivvi Bárdni who visits the land of the giants, having to face the consequences of his forefather’s visit to the land. Kitti is not modernising an old story, but she is creating a whole new storyline and a sequel. She is joining other Sámi artists in creating modern mythology and revitalising tradition in a modern format.

Sámi artists have long been concentrating in storytelling in forms of music and writing, but graphic novels are a relatively new form for Sámi arts.

“Graphic novels are a great story telling format, so I am surprised no other Sámi artist has used this before.”  Kitti says. Jiehtanasa Iđit has received great feedback from readers, and to the joy of readers, its Norwegian edition was published this February on the Sámi National  Day. As many people are waiting for translations to other languages as well, Sunna does mention that the past year has not been the best for publishers and cannot confirm any future translations. While the rest of us wait, Norwegian readers will be able to enjoy the work more freely soon, since the Norwegian Arts Council has already bought some copies to be distributed to libraries in Norway later on.