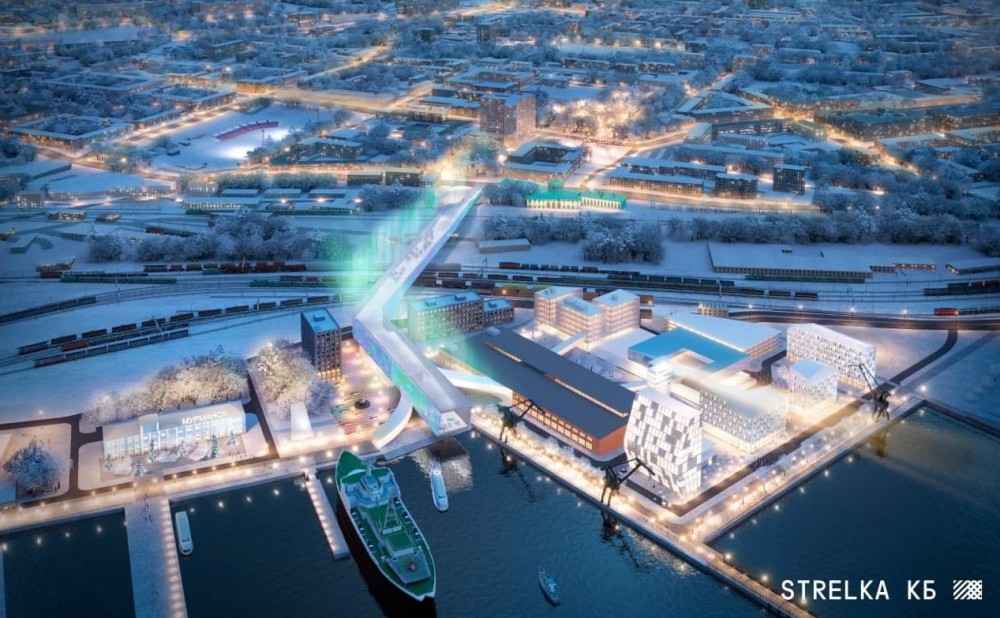 The new centre will be built next to the sea terminal where, among other things, the icebreaker "Lenin" is moored. A new bridge will ease the walk from the railway station to the new centre. Illustration by Strelka KB

The Russian Government approves a 3.4 billion rubles (€39 million) loan to fund the construction of the upcoming cultural and business complex New Murmansk.
Read in Russian | Читать по-русски
By

The cultural and business complex is to be built on Murmansk’s waterfront at the site of the former Murmansk shipyard and next to the local sea terminal. The complex is expected to provide at least 2,000 additional jobs and is aimed to stimulate Murmansk’s economy while providing both fun and exploration to its visitors. According to the Governor of Murmansk, Andrey Chibis, the center holds “fundamentally new opportunities for Murmansk to solidify its title as the capital of the Arctic”.

The complex is said to be a cluster of entertainment and will include: an embankment, an indoor themed park exploring Murmansk’s nature (which will also double as a pedestrian bridge between the city center and “New Murmansk”), the largest and most modern Arctic Museum in Russia, a congress a center with the possibility of holding both federal and international events, and a gastronomic bundle of cuisine native to the Arctic region, according to the designers of the district, Strelka KB.

For the complex to be built, an application for a budgetary loan of 3.4 billion rubles was filed. Marat Khusnullin, Deputy Chairman for Construction and Regional Development, approved the application, granting both the loan needed as well as a chance for the New Murmansk’s creation. At a meeting on Regional Development held by the Government Commission, Marat Khusnullin announced that “thanks to a loan of 3.4 billion rubles, the cultural and business center ‘New Murmansk’ will be created”.

The creators of the “New Murmansk” project are hoping that the center’s emergence will grant a momentum for the development of Murmansk’s economy and city life to take place.

The complex’s construction is scheduled to begin in 2022. By 2024, the commission of the first objects of “New Murmansk” is planned: two office buildings. In the following year, the indoor theme park and the Arctic Museum will be completed. In 2026 a series of construction work will wrap up with the food hall, concert area, event venue, the first stage of the congress center and the hotel being completed. The rest of the facilities will be commissioned from 2027 to 2029.

How the construction of the center will pan out is yet to be seen, however, the approval of the 3.4 billion makes the complex’s future seem brighter than ever.