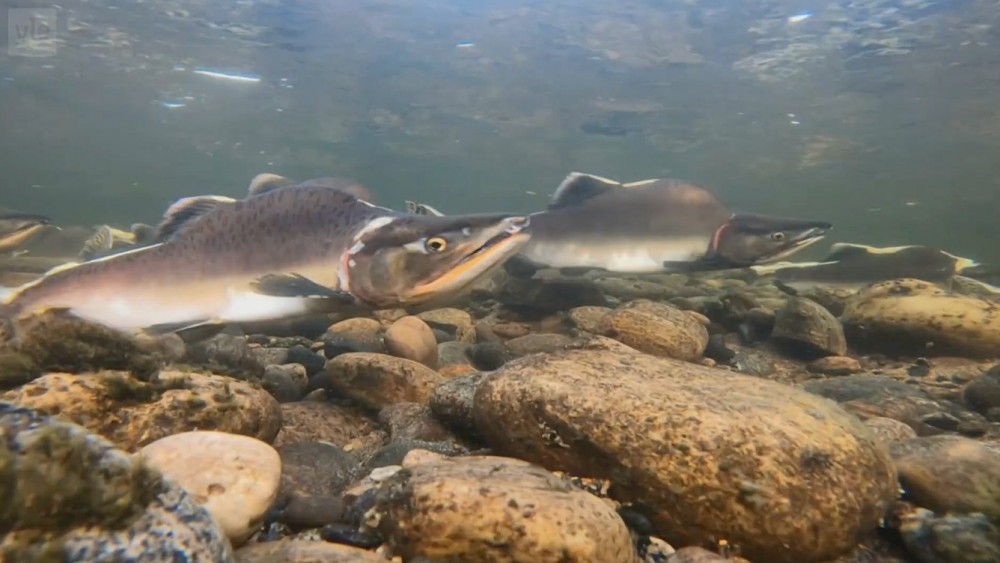 This summer, the number of humpback salmon in the River Teno, the border river between Norway and Finland, has increased enormously from last year. These salmon have been swimming near the shores, with masses of them dying in the river from exhaustion. Local people are extremely worried.
Read in Russian | Читать по-русски

This year, the River Teno (Deatnu in North Sámi) has become a river characterised by the humpback salmon. According to researchers the number of humpback salmon has increased tenfold in the river. Sonar counting shows that their number exceeds the number of the Atlantic salmon, the native salmon of the river. Local people are shaken by the situation.

Every summer, fisher Kati Eriksen fishes in the river system using drift nets, kick weirs and rod and reel. She is worried about the situation.

“It feels terrible that such a non-native fish species has almost invaded our salmon river, the River Teno. It also seems that our Teno salmon [Atlantic salmon] will suffer from this.”

Eriksen has noticed that the water quality of the river has deteriorated, the bottom has become slimy and there are much more plants growing in the river. She also believes that the decaying humpback salmon will have an adverse effect on the Teno river system.

The future will not look very bright, if the situation lasts

Kati Eriksen believes that it would be possible to make use of the humpback salmon. However, people first have to get over the initial shock and think more openly. Eriksen herself has eaten humpback salmon both in Canada and Sápmi.

“I’ve caught a few humpback salmon in my home river Vetsikkojoki (Veahčajohka), and I did smoke and eat them, and it was OK to eat them.”

Eriksen sees the future of the River Teno as quite dim should the situation with the humpback salmon become a lasting one.

“Of course, we’d have to get used to it then. There’s not much we could do about it. Right now, I just don’t know. My brain just hasn’t got used to the idea yet.”

Eriksen feels that it is misleading from the State of Finland to fight about the fishing rights of the local people for so long. According to Eriksen, the Atlantic salmon of the River Teno suffers above all from climate change – a thing that the State of Finland could do something about.

“I do believe that states would have tools to stop climate change and the drastic ecological changes that are going on in seas and rivers.”

There is no real remedy, but one solution is to reduce the number of humpback salmon

Ilmari Tapiola from Utsjoki also fishes in the River Teno. He believes that the humpback salmon have, above all, an impact on the environment of the river. He trusts the research findings that the species does not eat the fry of the Atlantic salmon.

“More than that I’m worried about the decaying humpback salmon; how they spur the growth of other grass species and plants in the river, ruining its shores.”

According to Tapiola we might have an environmental catastrophe in our hands, if the humpback salmon is allowed to run into the River Teno freely.

“I guess there’s no real remedy, as we can find the humpback salmon in the sea, but we could somehow restrict their number. It is also clear that other fish species such as the sea trout that stay in the river all winter and eat fry can run into the river now that we’re not allowed to fish with gillnets. This has even a greater impact on the native Atlantic salmon,” Tapiola reflects.