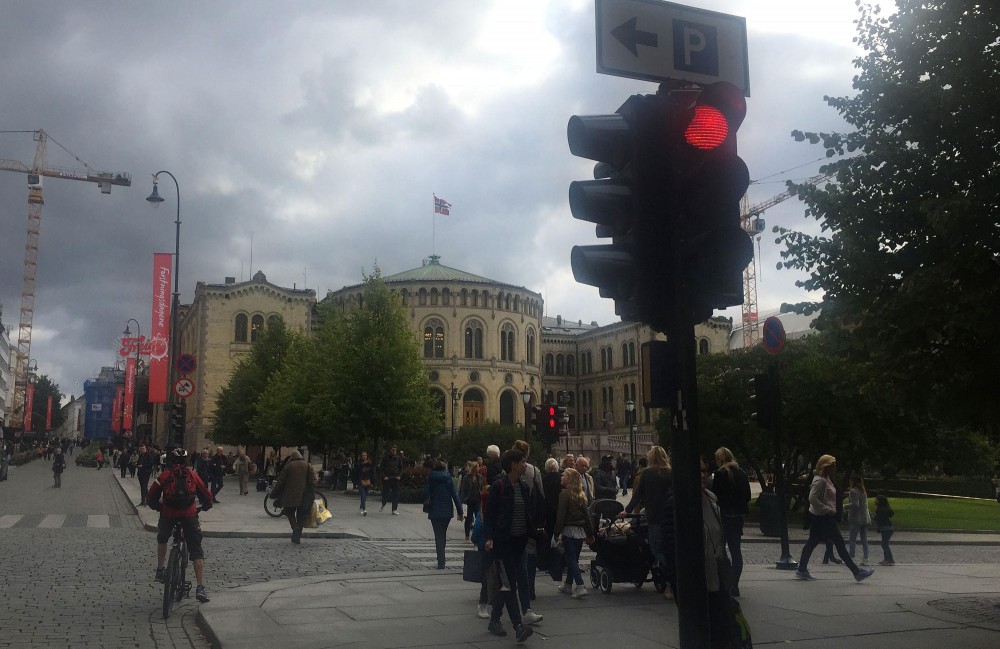 The Storting gets a new majority headed by the Social Democratic Party. Photo: Atle Staalesen

A green shift was in the air, but a majority of Norwegians ultimately cast their votes for a center-left coalition headed by Social Democrat Jonas Gahr Støre. The new government will include strong anti-EU forces.
Read in Russian | Читать по-русски

After eight years in power, Conservative Party leader and Prime Minister Erna Solberg will move out of government offices and leave the reigns to a coalition headed by the Social Democrats.

New PM will be Jonas Gahr Støre, the politician that held the post as foreign minister in the government of Jens Stoltenberg in the years 2005-2013. He will most likely join forces with the Center Party, as well as the Socialist Left Party.

The Social Democratic Party became the biggest party in the election with about 26,5 percent of the votes. The Party will get 48 seats in the national parliament, the Storting. That is one less than in the 2017 election.

A green shift was expected in the vote, but the Green Party ultimately failed to make it across the 4 percent barrier needed for parliament representation. With the election results, Norway is likely to continue to drill for oil in its water despite the climate crisis and UN warning of catastrophe unless fossil fuels extraction comes to a halt.

Outgoing Prime Minister and leader of the Conservative Party Erna Solberg in a speech late Monday night congratulated Social Democrat leader Støre with the election victory. She also congratulated the Center Party and the Red Party for their major boost in voter support.

“In 2025, we will be back,” the party leader assured. Erna Solberg has been prime minister since 2013. Over the last 1,5 year she has headed a coalition of the Conservative Party, the Liberal Party and the Christian Peoples Party.

“Now it is time for ordinary people,” Premier-Elect Støre said in his speech delivered at an assembly of party supporters. “People have voted for a more just society,” he underlined

He also made clear that he will put emphasis on “a just climate policy,” and said a green transformation will be a priority.

However, Støre will have great troubles with pushing for transformation. His own Social Democratic Party, as well as main coalition partner Center Party, is strongly against abandoning oil drilling and has warned against higher CO2 taxes and fuel prices.

Støre in his speech praised outgoing PM Solberg. “I want to say thank you to Erna Solberg, she has been a good and solid prime minister who has led the country through crisis. She is a politician with great knowledge.”

“In Norway, we have political opponents, not enemies,” he underlined.