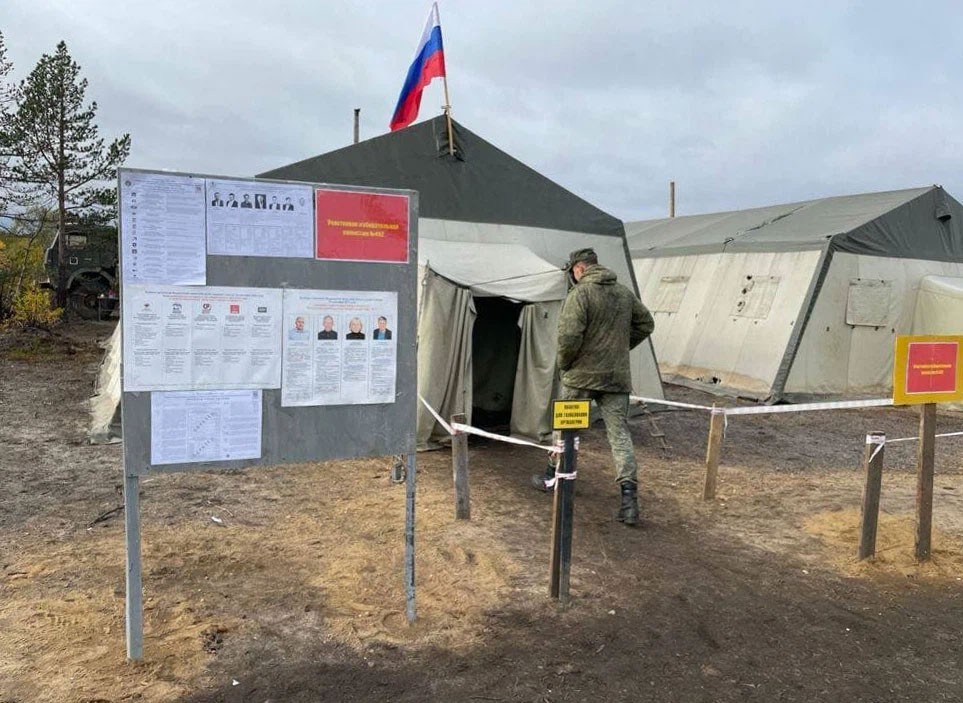 Near Murmansk, early voting for military personnel was blocked from prying eyes by a moat. The regional election commission assures everyone that it is legal.
By

“When I got to the polling station, it was 6 in the evening and the vote count had already begun,” says Oleg Cherkashin, a current deputy of the Murmansk Regional Duma and a candidate for the next convocation meeting from the  Spravedlivaya Rossiya, the “A Fair Russia” party. By law, he, like any other candidate, has the right to be present at polling stations during voting. However, Cherkashin learned by chance that in the Pechenga district, the polls opened almost two weeks before the official September 19 vote and voters were complaining.

“Messages from the parents of the servicemen began to come to me on social networks. They were saying that the guys were sent to exercises but the exercises turned out to be a vote. And yet only the night before, I asked the chairman of the Pechenga TEC, the Territorial Election Commission, if there were plans to hold an off-site vote. I was told that the TEC had not received any notifications from the precinct commissions. Without this notification, voting should not be carried out.”

The Pechenga Rayon is the most militarized area in the Murmansk region and just the other day, Novaya Gazeta spoke about the depressing living conditions in the local military garrisons. Soon after, Cherkashin raised a scandal and the regional governor, Andrei Chibis, visited the garrisons who promptly promised to repair the residents’ shabby dwellings. Chibis is in the top three on the regional list of the ruling “United Russia” party to the State Duma. This of course paved the way for him to tour the municipalities a few weeks before the elections as the current governor. He was of course accompanied by a pool of journalists and… he made lots of promises.

It can be assumed that life in the slums is not conducive to special loyalty to the authorities, even among people in uniform. This by the way has been confirmed empirically. The military of the Pechenga region showed a very low result at the recent vote on the referendum, the amendment of the constitution.  Perhaps it was this idea that led the organizers of the on-site voting not to leave things to chance generally.  The servicemen of the “19th Kilometer”, “Korzunovo” and “Luostari” garrisons were led, in formation, to vote in an army tent.

It can be assumed that life in the slums is not conducive to special loyalty to the authorities, even among people in uniform

And in this, they surpassed even the authors of the “voting on the stumps” law that closed outside polling stations to all except for those too physically infirmed to travel. In the Pechenga region, in order to get to the site, observers, journalists and candidates needed to, in the language of maneuvers, cross a water barrier. More simply, they had to cross a moat to get to the voting tents. You could do it comfortably in a “Ural”, a Russian made personnel carrier but you needed to wait for an order. Without one, you would have been deterred from going into the trench by a cannon. Literally,  you would have been shot. The voting tent was cordoned off and sat in the exercise area.

To start the on-site voting procedure, which was conducted under Criminal Executive Code 492 of the Russian Federation, the law requires notifying The Territorial Election Commissions, TEC, of its exact time and place. But then the detective work began as the location of the sought-after tent was practically a military secret.

It is impossible to check the messages on social networks about the ongoing voting but the TEC has to know what is going on.  Candidate Cherkashin went there and made a video on his phone on the evening of September 7.  This video is at the disposal of the editors. And the chairman of the Pechenga Commission, Yulia Makridova, was sincerely surprised in response to questions about the ongoing voting. “We have not received any notifications,” she said. And, realizing that her guest was not joking, she grabbed the phone saying, “I must inform the management.”

The next morning, September 8, there were still no documents on the Pechenga TEC website where candidates or observers could find out the time or place of the very secret ballot. At 11:22 a.m., Cherkashin, with two witnesses and again recording the video, went to the TEC website. In the “Documents” section, there were links to two decisions from 5 September. But when you clicked on either, the same document opened. This document however had nothing to do with the current elections but was instead a resolution from the district administration from July 4, 2020 recognizing a number of old documents as invalid. After an hour and a half, changes were made to the file. You can see this with a single click if you look at the public code of the internet page where the document is located. It also changed several times after this. By the middle of the day, the decision on the date and time of the vote, September 5, was really available to everyone. However, 80 percent of the voters at the polling station had already voted by the 7th. This was later shown by counting the votes.

At this time, the deputy chairman of the regional election committee, Yelizaveta Yevsyukova, made a statement actually accusing the opposition candidate of lying and made the claim that “All decisions were made in advance. The texts of the documents were published on official resources on the Internet and are now in the public domain, as it was before”.

The published decision states that the voting location must be brought to the TEC no later than September 6. And remember that we know that the TEC chairman did not know anything about it on the evening of the 7th. They also published the exact coordinates of the polls and a clause guaranteeing candidates and observers the opportunity to be there at the scene.

Cherkashin drove to the place at 2 o’clock. It was 50 km from the village of Nikel. At the border of the district however, he was stopped by a patrol. According to the corporal making the stop, without a pass, he could not let anyone into the military training ground where the elections were taking place as this was against the law.  The candidate objected, showing his documents and pointing to the published voting location. “They told me to come here,” he said but the boy just shrugged his shoulders and recommended that the candidate “go to the 200th brigade for a pass”.

Instead of the brigade, Cherkashin went to yell at the TEC. Even after this however, he was still not allowed onto the landfill without a pass. They made us wait an hour for a “Ural”. It was only free when the brigade commander allowed it. By 6 o’clock, two hours after the voting was finished, Cherkashin finally got into the tent but only after receiving yet another warning about the prohibition of photography and video filming at a “military facility”. Apparently, following this last rule did not concern the Regional Electoral Commission who published their own photographs from the scene of the events on Telegram.

After, Cherkashin commented on what he saw:

“I can’t name the results according to the law, but even Ramzan Akhmatovich, the current head of the Chechen Republic, would be envious,”

By the way, not only the northerners voted. 1,500 inhabitants of other regions were tossed into the maneuvers. In total, 24,218 voters live in the district.

At the same time, some participants in the vote described their experiences in detail. Their data is also at the disposal of the editorial office as well as the names of their commanders. We are required by law to maintain the confidentiality of our sources.

“They made us vote and showed us where to put the check marks. Our telephones were confiscated on the way into the tent. Military police stood at the entrance and exit so that outsiders could not pass. Cars blocked the paths so that the civilians could not be driven in,” says one of the servicemen. “We stood there and pointed our fingers at our choices,” confirms another. “We stood in front of the entrance to the tent with a metal detector. Everything was open and there weren’t even any booths,” a third adds, all on condition of anonymity. In fairness, let us clarify that there were at least two booths in the photos published by the regional election commission although the drapes were translucent.

Cherkashin considers the military field voting illegal and intends to seek the cancellation of its results in court. Meanwhile, the regional election commission issued a statement that “The early voting from the military was held openly and publicly and took place in the presence of an observer from the Public Chamber of the Region and that candidates A. V. Kuznetsov, I. N. Penkov and O. A. Cherkashin, along with media representatives, noted the transparency and openness of the voting procedure”.

Andrey Kuznetsov is a candidate on the list from United Russia and the current head of the district, Igor Penkov is number one from the Russian Party of Pensioners for Social Justice. Neither Kuznetsov nor Penkov answered calls from Novaya Gazeta. Alexander Alekseev however, a member of the Pechenga TEC, confirmed that the commission did not know that voting was taking place in the field until 8 pm on September 7. No notification was received from the PEC and yet, the next morning, the ballot boxes were filled with paper.

This story is originally published in Russian by Novaya Gazeta.

The proper ideals of the Duma