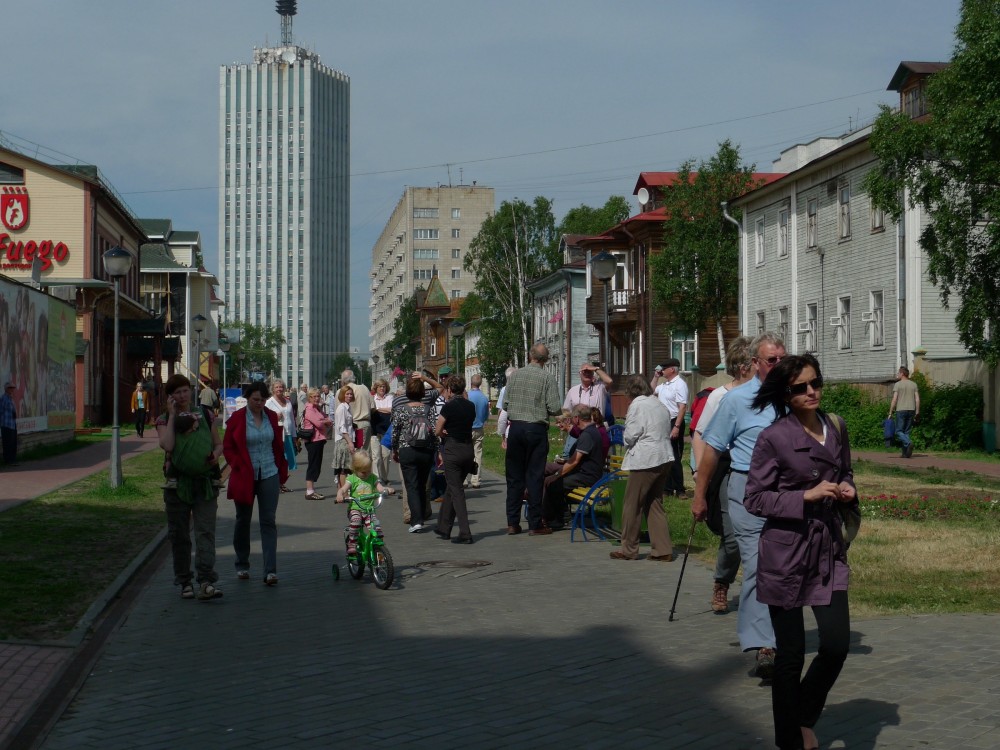 Arkhangelsk is one of the oldest cities in Northwest-Russia. Photo: Thomas Nilsen

“Nobody’s going to screw up a town with that name,” argues Aleksandr Donskoi, who served as mayor of Arkhangelsk from 2005 until 2008.
Read in Russian | Читать по-русски
By

In 2006, the then-mayor of Arkhangelsk made nationwide headlines as he was one of very few who raised his hand announcing his intentions to run for presidency in 2008. In 2007, Aleksandr Donskoi was arrested on charges of abuse of office and of forging his university diploma.

Then, a few days after the Presidential elections which Dmitry Medvedev won in March 2008, the Arkhangelsk mayor was released from prison after receiving a sentence of three years on probation.

After retiring from politics, Aleksandr Donskoi has continued to make headlines, like when he in 2017 drove a red Ferrari into a shopping mall in Moscow doing doughnuts with a crowd of security guards trying to stop him.

It is in an interview with regional news online 29.ru, the former mayor suggests changing the name of the city to Putingrad.

“I confidently declare that this will give us a very powerful momentum for development,” he says.

Donskoi argues that renaming the city will be followed by an economic investment boost.

“I’m absolutely sure that if the idea of renaming Arkhangelsk to Putingrad comes up at a meeting of the City Council, no one will vote against it. This will happen very quickly,” Aleksandr Donskoi says in the interview with 29.ru.

He points to Chechnya where the head of the republic, Ramzan Kadyrov, got a street in the center of Grozny named after Putin.

“Chechnya is actively developing; a lot of budget money has been spent on the restoration of Grozny. I was there myself twice, very cool. To learn from experience, this can be done, Donskoi says and adds:

“As you name the ship, so it will float. I’m on fire with this idea.”

“Putingrad is the perfect name. Nobody’s going to screw up in a town with that name,” Aleksandr Donskoi says.

Founded by Ivan the Terrible under the name Novy Kholmogory in 1584, the city was Russia’s first port town and has always played an important role for sea-trade. With more than 300,000 inhabitants, the city is the capital of Arkhangelsk Oblast.

Russia has a long tradition of renaming cities in times of political changes. Especially after the October Revolution in 1917 and after the breakup of the Soviet Union in 1991, many cities got new names.

In northern Russia, Sudostroy became Molotovsk in 1938 before it again changed name to Severodvinsk in 1957. Kirovsk on the Kola Peninsula was originally named Khibinogorsk until 1934, while Polyarny on the coast to the Barents Sea was named Aleksandrovsk until 1926.

Murmansk, the world’s largest city north of the Arctic Circle, was founded under the name Romanov-na-Murmane in 1916, a name it had for no longer than a year. The Provisional government on Russia’s coast to the Barents Sea would no longer have a city named after the Imperial Russian dynasty of Romanovs.