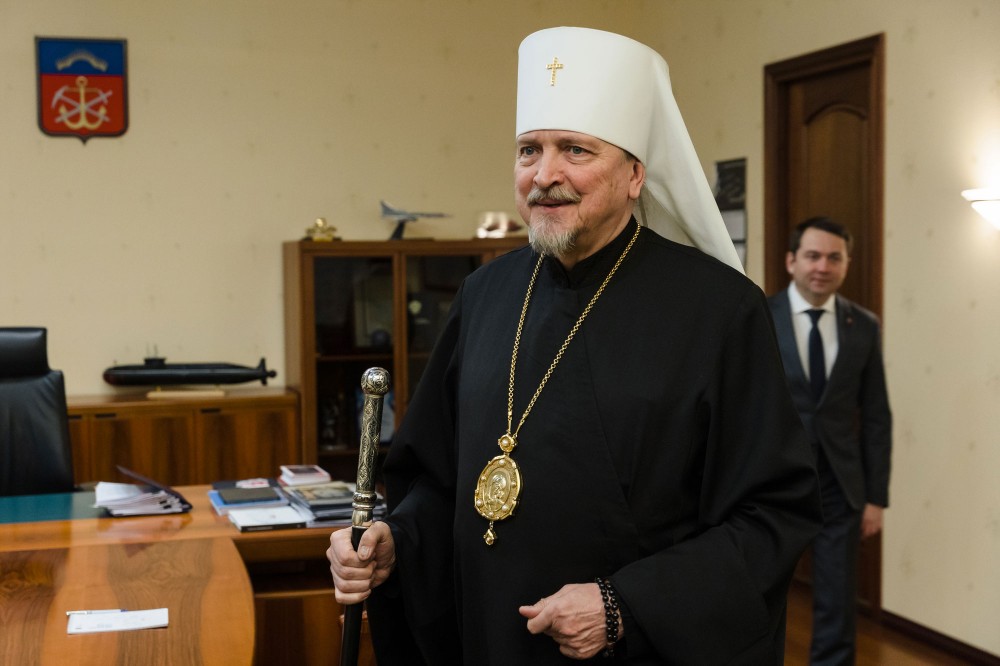 Metropolitan Mitrofan is ready to erect his monumental church building in a central city park. But many locals fiercely oppose the plans.
Read in Russian | Читать по-русски
By

The Russian Orthodox Church has planned a major cathedral in Murmansk for more than two decades, but the project has repeatedly been either cancelled or postponed.

Now, Metropolitan Mitrofan, the region’s top clergy, is determined to build the church house in a downtown park nor far from government buildings and key state institutions. The plot at Burkova Street was reportedly in the old days a cemetery for fallen soldiers in the First World War. Later it became a popular park area.

According to the metropolitan, the cathedral will be built to the memory of all the Russian soldiers that fell during the 1WW. This was an idea presented already by Czar Nikolai II when he founded the far northern city in 1916, Mitrofan explains.

In November 2020, the top clergy man presented his project to federal Deputy Premier Dmitry Chernyshenko. The cathedral should get a special national status similar to the new military cathedral in Patriot Park in Moscow which is devoted to the Second World War, Mitrofan told the leading government official.

Furthermore, according to Mitrofan, Murmansk is today the only regional capital in Russia that does not have a cathedral.

But the construction project now meets major criticism both from the public and from politicians. Many see the park at Burkova Street as one of few remaining park areas in town and call for its protection. Others see the area as suited for real estate development. Since Metropolitan Mitrofan presented his preferred location for the building, local newspapers and social media have given major negative coverage of the project, and this week former city mayor and now member of the State Duma Aleksei Veller rebuffed allegations that he is behind the criticism. Veller is believed to own several of the critical news media.

The dispute is now increasingly heated, and Mitrofan in a recent church sermon accused local authorities of siding with “evil forces.”

“They have got their team from the Dark Lord, and here are plenty of his compatriots, the city is full of them,” Mitrofan told his congregation, and added that the power is “corrupt.”

“I have in mind what is happing with our desire to build a cathedral,” he explained.

Architectural sketches show a major complex on a hill overlooking the city. The cathedral has one major dome and an adjacent building with glass roof.

Several regional politicians support the project. “It will truly be an architectural jewel of the city, it will be perfectly visible from the Central Square and the Kola Bay,” says Yevgeny Nikora, former deputy governor, now Deputy Speaker of the regional Duma.

But the level of support is far more mixed in the local city assembly.

Previous attempts to build the cathedral have failed. Until recently, the projected plot for the building was at the hill near Semyenovskoye Lake. For several years, construction was prepared, donations collected, and the foundation rock for the project was even gracefully put in place in a ceremony attended by the regional governor and top church dignitaries in 2013.

The hill by the Semyenovskoye Lake was long the preferred site for the cathedral. Promo visualization by the Church fundraising group

The cathedral was to be more than 50 meter high and be ready for the 100-years anniversary of Murmansk in 2016. However, the developers soon concluded that the plot was too small for the cathedral and that another site was needed.

According to Metropolitan Mitrofan, the original plan of Czar Nikolai II was to build the cathedral on the central square of the city, on the site of today’s Cultural Palace. However, construction did not start before the Communists took power in the city in 1920.