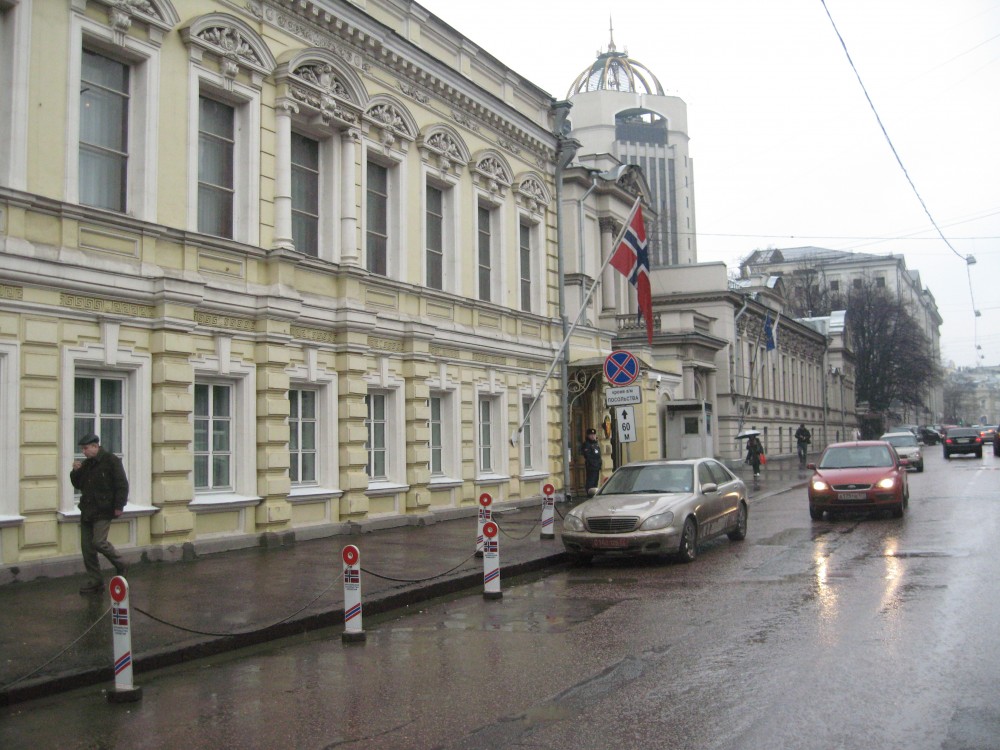 Open, but on higher alert. The Norwegian Embassy in Moscow. Photo: the Barents Observer

A higher level of preparedness has been introduced, but the Nordic country's embassy and general consulates remain open.
Read in Russian | Читать по-русски
By

“The Ministry of Foreign Affairs continually evaluates the security situation for the personnel at all of our three stations in Russia,” ministry spokesperson Siri R Svensen says in a comment to the Barents Observer.

Putin’s war against Ukraine has triggered tensions across Europe not seen since the Second World War, and foreign companies and citizens flee Moscow and other Russian cities.

Norway keeps open its embassy in Moscow, as well as the general consulates in Murmansk and St.Petersburg. But the diplomatic offices are on higher alert.

“Measures have been taken to strengthen preparedness in case of a worsening of the situation,” the foreign ministry informs.

The introduction of harsh western sanctions against Russia has spurred reactions amongst many Russians.

The Norwegian General Consulate in Murmansk confirms that it has gotten “certain remarks” on social media. But considering the safety of its consulate staff, the ministry underlines that “we do not want to comment on possible threats.”

The last days have seen several comments on VK, the Russian social media, against the country and its general consulate.

In a post on the VK page “Murmansk - Stolitsa Arktiki”, the page administrators indirectly call for demonstrations by the Norwegian general consulate. Several users aggressively comment on the post, and one user even call for actions against the consulate staff.

In a post on the VK page of regional Governor Andrei Chibis, a user ask the regional leader for a comment on the allegedly planned demonstrations against the general consulate. The post is not responded on by Chibis.