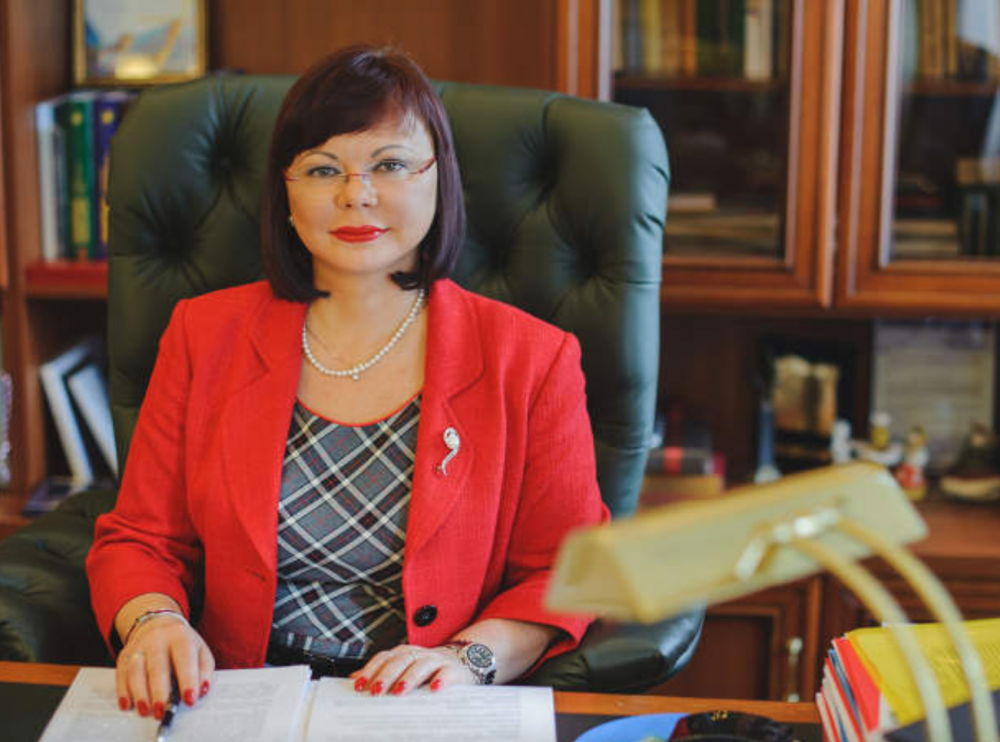 The rector who for more than a decade has built international research and educational cooperation between Arkhangelsk and universities in Tromsø, Umeå, Rovaniemi and Oulu now publicly voices a pro-war mood.
Read in Russian | Читать по-русски
By

Northern (Arctic) Federal University (NArFU) is Russia’s largest in the north and from the campus near the city center of Arkhangelsk, rector Elena Kudryashova has signed numerous partnership agreements with universities in the Scandinavian north. In 2011, the founding father of the Barents Euro-Arctic cooperation, Thorvald Stoltenberg, was appointed Honorary Doctor at the university.

Now, NArFU takes a strong position together with many other universities in Russia backing Kremlin’s ‘special military operation’ in Ukraine, a bloody war with bombings and execution of civilians unseen in Europe since the end of World War II.

Making historical links to grandfathers and great-grandfathers who fought against Nazism, Elena Kudryashova says in an emotional call to her students that “… today, the conduct of a special operation to liberate the Ukrainian land from nationalistic disgusting dirt is the fulfillment of a historical duty in the memory of victory generation.”

She says Vladimir Putin’s decision to start the operation was “difficult but forced”.

Rector Kudryashova urges her students to be careful not to repost controversial information. “Remember that false information is a provocation - a tool to fight against our country, its unity.”

“Emotional decisions tend to lead to bad decisions, the consequences of which can be devastating for you and those around you,” Elena Kodryashova writes.

In Arkhangelsk, the NArFU rector heads the regional branch of the Russian Historical Society, an organization chaired by Sergey Naryshkin, director of the Foreign Intelligence Service.

The Russian Historical Society is known for glorifying Russia’s past, from whitewashing Stalin’s crimes against his own people to fueling Putin’s ideas on restoration of the empire.

Two days before Putin launched his massive war on Ukraine, rector Kudryashova took part in the opening of a student patriotic club at the university’s Military Training Centre.

Two weeks into the war, NArFU uploaded a YouTube video where students stood on the embankment of Northern Dvina holding huge banners stating the well-known quote from emperor Aleksandr III: “Russia has just two allies, the armed forces and the navy.”

Voicing a firm pro-war position, the Northern (Arctic) Federal University says Arkhangelsk Oblast is the northern forepost of the country. The video flashes a few nuclear submarines built in the region before ending with the hashtag #zаMир (for peace) with the non-Cyrillic letter “Z”, by the Kremlin used as a symbol to market Russian unity after its armed forces attacked Ukraine on February 24.

The Russian Union of Rectors has backed the President’s official line with a strong statement supporting the military actions.

Echoing propaganda by Kremlin, the rectors support Putin and the troops.

“It is very important in these days to support our country, our army, which defends our security, to support our president, who perhaps made the most difficult, hard-won but necessary decision in his life,” the statement notes.

“This is Russia’s decision to finally end the eight-year confrontation between Ukraine and Donbas, achieve the demilitarisation and denazification of Ukraine, and thereby protect itself from growing military threats.”

The letter further underlines the importance to carry out the universities’ “main duty,” conducting education, and “firmly establishing patriotism in young people.”

Elena Kudryashova has signed the pro-war letter. So has Anatoly Voronin, rector of Petrozavodsk State University in Karelia. Interesting to note is that the other three universities in Russia’s European north, Murmansk, Vologda and Syktyvkar, have not signed the support statement.

“In today’s Russia, to publicly denounce the war in Ukraine comes at a high political and personal prize, and we cannot demand of our Russian colleagues that they do this. However, in the current atmosphere of pro-war propaganda campaigns, remaining publicly silent should be appreciated as a form of passive resistance,” says Kari Aga Myklebost, a professor in history at Norway’s Arctic University in Tromsø.

Myklebost is an expert on Norwegian-Russian cooperation and has over the last two decades cooperated closely with the university in Arkhangelsk and other universities in the Russian north.

The professor sees the Arkhangelsk-based university’s propaganda as part of a development since Russia’s annexation of Crimea in 2014, with growing militarization of the society.

“This is also how we have learned to know the NArFU society of researchers since the University of Tromsø established cooperation around 1990. However, over the last years we have witnessed increased restrictions on academic freedom in Russia, with an amendment to the Russian Federal Law on Education in June 2021 as a low point,” she says.

“Sitting in Norway, we do not know whether the pro-war statements coming from NArFU and other Russian universities are sincere and reflect a true commitment to the Kremlin’s warfare in Ukraine, or whether they should be read as a sort of pragmatic university administration in harsh times. We do know, however, that our Russian colleagues can find access to broader information on the war than what is presented by state-controlled Russian media, and it should be possible for them to make up their own minds about the current situation by critical thinking.”

For the academic society in northern Norway, recent developments in Russia are profoundly troubling.

“We deeply regret the ongoing militarization of NArFU, which has been a long-time and solid partner for us,” Kari Aga Myklebost says.

On March 4, the European Commission decided to halt cooperation with Russian entities in research, science and innovation in response to the Russian invasion of Ukraine.