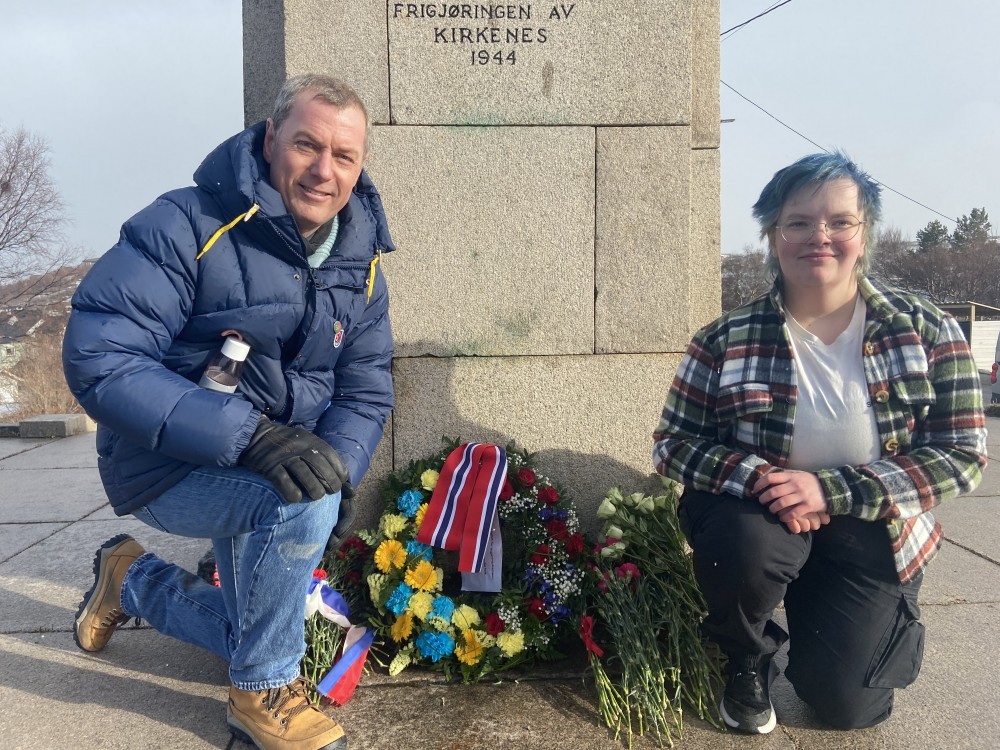 Harald Sunde and Vilde Fremstad with the Socialist Party laid wreaths with blue and yellow flowers in addition to the traditional Norwegian flag colors at the war memorial in Kirkenes. Photo: Thomas Nilsen

"We proposed to invite the Ambassador in solidarity with the suffering people of Ukraine, but the Mayor said no," says Harald Sunde, Municipal Councilman in Kirkenes on Norway’s border with Russia.
Read in Russian | Читать по-русски
By

Kirkenes had a special relationship with its eastern neighbor. In October 1944, Red Army troopers pushed out Norway’s Nazi German occupier half a year before Adolf Hitler committed suicide, and his brutal regime a week later, on May 8th, 1945, announced unconditional surrender.

Unlike in most of Eastern Europe, Stalin’s troopers marched back home from Kirkenes to the Soviet Union in September 1945. A statue of a Soviet soldier was unveiled in 1952 and ever since has locals laid wreaths when honoring the liberation.

“President Putin is now trying to tell his people and the outside world that the war of occupation he has waged against Ukraine is also a fight against Nazism, similar to the Soviet Union’s fights against Nazi-Germany. This is a big lie,” says Harald Sunde with the Socialist Left Party in Kirkenes.

Sunde reminded the audience that one of the first Red Army liberators to Kirkenes was from Sumy in Ukraine.

“Our two countries are far from each other, but we have a common neighbor that nowadays brings us closer,” Harald Sunde said and pointed to the fact that the horror of war is something locals in Kirkenes remember, although what civilians in Ukraine today experience is much worse.

“In solidarity with the people of Ukraine, we have therefore included the blue and yellow colors in the wreaths laid here today.”

In 2019, at the 75th anniversary of the Kirkenes liberation, Foreign Minister Sergey Lavrov laid wreaths with flowers of the Russian tricolor at the same monument.

Sunde says to the Barents Observer that his party suggested that Kirkenes should invite Kyiv’s Ambassador to Oslo for this year’s celebrations.

“In solidarity with the suffering people of Ukraine, we proposed to invite the Ambassador to attend the wreath-laying ceremony.”

The proposal, directed to the Mayor, however, was turned down.

Mayor Lena Norum Bergeng says that the municipality instead of holding the traditional ceremony at the statue of the Red Army Soldier chose to mark the Liberation Day at another memorial on the outskirts of Kirkenes.

“We decided to do so in solidarity with the people of Ukraine,” she says.

“It would not be right to mark the efforts of the Red Army as long as the war in Ukraine goes on,” the Mayor notes.

“We chose not to invite other foreign officials or representatives to the celebration,” Lena Norum Bergeng said when asked by the Barents Observer why the suggestion to invite Kyiv’s Ambassador was turned down.

Russia’s Consulate General in Kirkenes writes on Facebook that it will arrange “the traditional ceremony” at the Liberation Monument on May 9th.

The municipality of Sør-Varanger (Kirkenes) is friendship town with Severomorsk, home to the headquarters of Russia’s Northern Fleet that is actively participating in the barbaric onslaught on civilians in Ukraine.