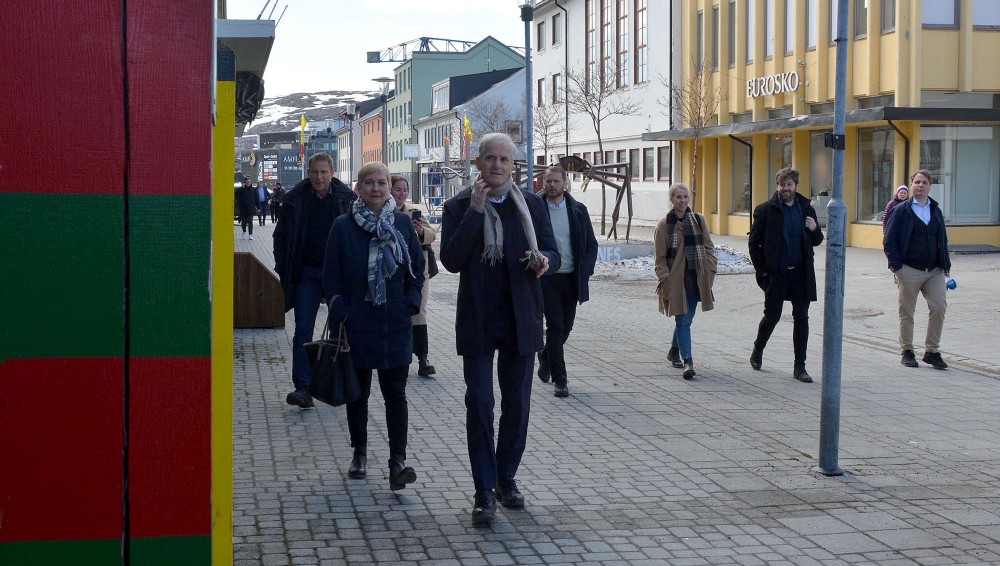 12 years after he was instrumental in delineating a disputed area in the Barents Sea, Jonas Gahr Støre still has hope for cross-border cooperation.
Read in Russian | Читать по-русски
By

The Norwegian Prime Minister has visited the small border town numerous times, most of them as foreign minister. Kirkenes is located on the Barents Sea coast only few kilometers from Russia and was centerpiece in Støre’s high north policy developed under the government of Jens Stoltenberg in the years 2005-2013.

It was a time of hope and expectation for a flourishing relationship with Russia, and Støre soon became known for his positive stance on the eastern neighbor. The apex of the period came in 2010 when a deal was a signed on the delimitation of 175,000 square km of disputed waters in the Barents Sea. The historical agreement was to open up for massive industrial development, much of it in concerted action between Norwegian and Russian companies.

This week, Støre was back in the border town. But it is not the same Kirkenes as he visited ten years ago.

The prime minister met a local community struggling to come to terms with the new war-time reality. For more than three decades, local authorities and businesses have pinned much of their development perspectives to nearby Russia. The repressive Putin regime and its aggression against neighboring countries has shattered it all.

In his meeting with the town mayor and local business representatives, Støre was told about a growing concern for company closures, unemployment and dwindling population. He was also requested not to rush with new sanctions against Russia because, as one participant said, “it will not help Ukraine that Kirkenes loses jobs.”

Prime Minister Støre has repeatedly condemned the Russian aggression against Ukraine, and also supported the shipments of Norwegian weapons to the Ukrainian Army.

However, while in Kirkenes, the government leader was reluctant to fully close the door to the Russians. In an interview with the Barents Observer, Støre underlined that he “believes in the art of making things become possible,” and that cooperation with Russia can “reemerge.”

“I choose not to be sad and pessimistic,” he said, and explained that Norway previously has managed to “turn a relationship from almost zero contact to very extensive contact, driven first of all by people-to-people cooperation and then gradually business cooperation and cooperation between authorities.”

The prime minister also does not want to condemn the local town council for its refusal to give up its friendship agreements with Russian municipalities, among them the heavily militarized town of Severomorsk.

“We have to separate between one the one hand the responsibility of the Russian leadership and the Russian military, […] and on the other hand ordinary people on the other side of the border,” he said to the Barents Observer.

He also underlined that the heavy losses of Russian soldiers in the conflict is “a tragedy in the tragedy.”

The legacy of Støre is significant in this northernmost part part of Norway. Not only did he manage to agree with the Russians on the delimitation in the Barents Sea, he also boosted the role of the Barents Cooperation and prepared the ground for local visa facilitation. The High North Policy of foreign minister Støre spurred hope and optimism in a Norwegian region that for decades had experienced economic hardship and out-migration.

However, much of Støre’s stress on the North was a driven by a desire to exploit Arctic hydrocarbon reserves. The disputed waters in the Barents Sea were believed to hold vast resources of oil and gas, and on the Russian side of the maritime border was the Shtokman field, one of the world’s biggest offshore natural gas fields.

The Norwegians were hungry for more petroleum and prepared for pragmatism with regard to Putin’s increasingly dictatorial rule. However, not Støre, nor the Norwegian oilmen were ready for outright totalitarianism and expansionist war.