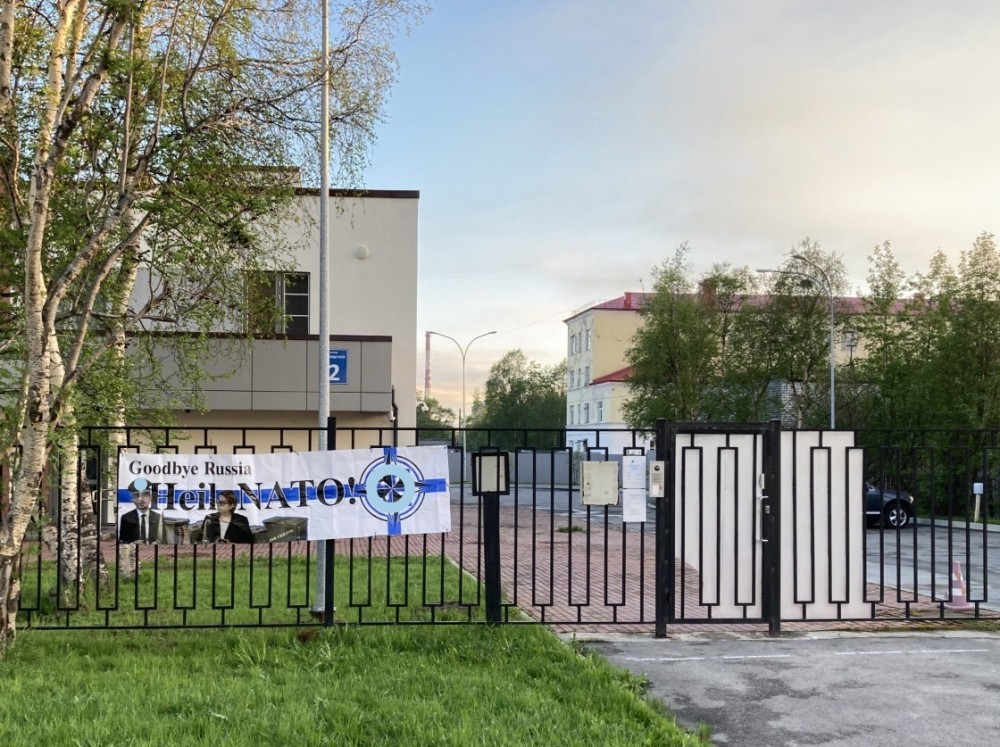 Someone put up a banner in front of the Finnish consulate in Murmansk. Photo: vk.com/murmansk51

The more than two meter wide poster depicts two consulate employees, one of them with a Nazi officer cap and a gunsight against his head.
Read in Russian | Читать по-русски
By

It was a carefully planned and extraordinarily hostile stunt that on the 8th of June shook the diplomatic staff of Finland’s Consulate in Murmansk. On the fence in front of the consulate building in downtown Murmansk appeared a banner that depicted two consulate staff members on a background of the Finnish flag, the NATO emblem, ammunition boxed destined for Ukraine and the text: “Goodbye Russia. Heil NATO.”

One of the staff members is Lari Peltonen, the leader of the diplomatic office. He is shown with what appears to be a Nazi officer cap. A gunsight is aimed against his forehead.

In addition to the poster, someone has inscribed “NATO Territory” on the street sidewalk.

It is not clear who made the banner and painted the street asphalt, but it is clearly a carefully prepared action. It comes only a day after former Russian president Dmitry Medvedev in extraordinary manners called western neighbours “bastards and scum.”
Representatives of the consulate told SeverPost that the banner was gone when they arrived to the office Wednesday morning. But newspapers and social media in Murmansk has abundant references to the case.

A note on one of the biggest VK pages in the region shows photos from site and is accompanied by a number of anti-Finnish reader comments.

In a comment to the Barents Observer, the consulate staff says the incident will be addressed with local authorities.