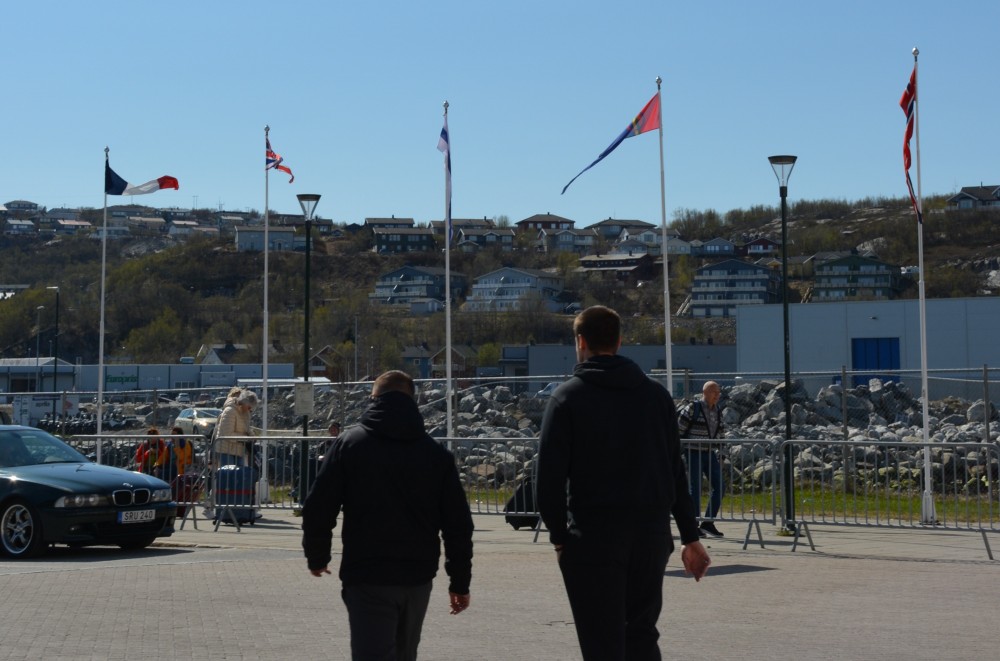 Few hours after Russia's General Consul in Kirkenes delivered a 9th of May speech where he warned against the rise of Nazism in Europe, a group of Russian sailors desecrated U.S and German flags in the local seaport.
Read in Russian | Читать по-русски
By

It was on the 9th of May, the day celebrated in Russia as Victory Day, that sailors from a Russian fishing vessel moored in the Kirkenes Port staged their action.

According to police reports, the Russians took down a German flag from a flagpole in the Port area and replaced it with a Russian. At the same time they tramped on the German flag.

They also lowered a U.S flag on half mast.

The incident was spotted by locals and reported to the police. A police case was opened on the subsequent day.

The incident took place on the same day that Russia’s General Consul to Kirkenes assembled compatriots by a local war memorial. In a speech, Nikolai Konygin warned against the reemergence of Nazism in Europe and said that “the ones who fought on the side of Fascist Germany are now praised as heroes.”

According to Konygin, “more and more Fascist symbols are being used and even criminals sentenced in the Nurnberg Tribunal are praised.”

“We now see attempts to revive Nazism, falsify history [and] in a series of European countries people openly support Fascist parades and desecrate war memorials,” he told an audience of local Russians.

With indirect reference to Russia’s objectives in the current war in Ukraine, the diplomat also highlighted the joint efforts of Russians and Ukrainians in the 2WW.  “The Soviet peoples […] fought shoulder to shoulder for our common motherland and for future generations.”

The flag desecration by the Kirkenes Port was initially looked at by the police as a possible act of hate crime. But investigators soon concluded otherwise.

“We do not see this as a deliberate provocation,” Police Prosecutor Anja Indbjør says to the Barents Observer.

Investigations and interviews with the involved individuals and the ship captain indicate that the incident was not planned.

“There was a party with alcohol involved, and we believe the incident was spontaneous,” the police representative says.

Both the captain and the crew have reportedly apologized. A fine for the inflicted damage to the flags has been issued by the police. The vessel left the Kirkenes Port shortly after the incident.

Kirkenes is located only few kilometres from the border to Russia and is extensively used as base by several Russian trawler companies. In the last week of May, there were at least ten Russian fishing vessels in town.

Although not member of the EU, Norway has incorporated all EU sanctions against Russia. That includes a ban on Russian ships in Norwegian ports. However, fishing vessels are exempted.

The small border town of Kirkenes has pinned much of its post-Soviet past on cooperation with Russia, and the war against Ukraine and subsequent international sanctions have put local authorities off guard.

Representatives of the Kirkenes town council have strongly warned against a closure of the local seaport to the Russians, arguing that it will hurt local economy.

There is today a total halt in cross-border contacts, but town Mayor Lena Norum Bergeng is not ready to give up the big neighboring country.

“I hope that we some time can resume cooperation,” she told the Barents Observer. But she admits that “it looks pretty dark at the moment.”

“I can not look into the future, but the longer the war lasts, the more difficult it gets.”