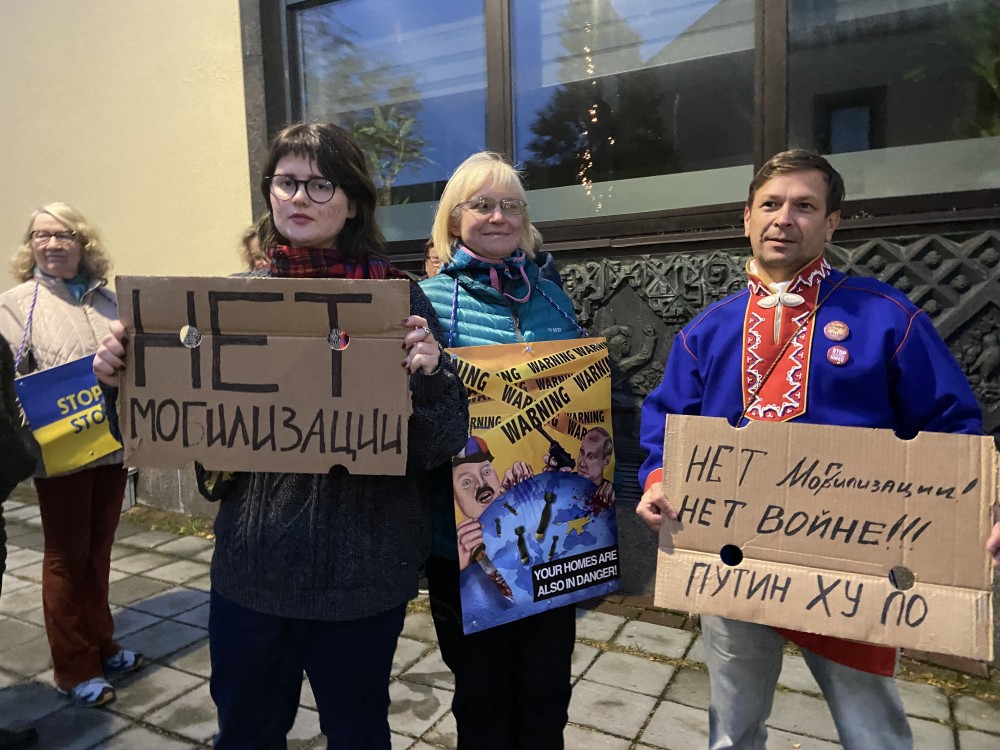 Polina Vorobeva (left), Natalia Solianik and Andrei Danilov were among the protesters outside Russia's Consulate General in Kirkenes on Wednesday. The posters read "No mobilization", but with 'b' changed with 'g' it could also be translated "No grave-ilization" Photo: Thomas Nilsen

Putin’s war call-up makes Russians living abroad and those with dual citizenship think twice about crossing the border for visiting friends and near relatives.
Read in Russian | Читать по-русски
By

Protests by anti-war movements have broken out in several cities in Russia following the dramatic announcement by Vladimir Putin calling up some 300,000 reservists to join the war on Ukraine.

So also in Kirkenes, the small Norwegian town a few kilometers west of the border with the heavily militarised Kola Peninsula. Outside Russia’s Consulate General, protesters carried posters calling on Putin to end the war.

Few wanted to talk openly, but Putin’s signature on a “partial mobilization” makes people worried. Will it be safe for Russian men living abroad to make a visit home, many wonder. Or what about those with dual citizenship?

The rules of who is covered or not are fairly unclear. Like outside the Consulate General in Kirkenes, social media reports across Russia on Wednesday debate what a partial mobilization actually means.

Who will be thrown into the meat grinder of war, was one question raised in a Telegram post from Murmansk.

Can anyone be sent to the war? Will there be a full mobilization later? Can Russia’s external borders be closed for exit for men in certain age groups, or only for those reservists now called to take part in the dramatic escalation of the war on Ukraine?

Questions were many, answers were few. Meanwhile, one-way tickets on flights out of Russia were sold out a few hours after Putin’s televised announcement.

No increase of men leaving Russia is so far reported at the checkpoints along Russia’s land borders with Finland or Norway.

Polina Vorobeva, one of the protesters in Kirkenes on Wednesday, tells that the mobilization now is a big worry for many Russians in Norway.

“My family has big problems because my brother should get a new passport, a challenge that can only be solved by traveling back to Russia. But he can’t as we are afraid he will be called to the war,” Polina explains.

“There are many here in Norway in the same situation,” she adds.

There are a few hundred Russians living in Kirkenes, many with dual citizenship. With the border a few kilometers to the east and Murmansk a three-four hours drive, many used to visit friends and family. Border crossings are easier for those with two passports as no visas are needed.

“I talked with two men today, both have Russian passports, and they said a planned weekend tour across the border was canceled this morning when they heard the news about Putin’s mobilization,” says Natalia Solianik.

During the demonstration, a group of fishermen from a Russian crab vessel approached the demonstrators outside the consulate and started to debate pro-war, and anti-war arguments.

“I’m glad we are gonna be at sea for many months and not going soon back to Russia,” one of the young men told the Barents Observer on the condition that he would not be named.

Roman Prokopenko (32) spent his early childhood in Novosibirsk before moving to Norway where he grew up and today works as a journalist for the regional newspaper iFinnmark.

With dual citizenship, Roman could easily travel to Russia without a visa.

Such a trip, however, will not happen soon, he says after listing to the news about Vladimir Putin ordering a “partial mobilization” of citizens that have served in the armed forces.

“I have both grandparents and my father living in Novosibirsk and have for long thought about visiting,” he says.

“Then came the pandemic that hindered travel plans. It was followed by the conflict with Ukraine creating lots of uncertainties,” Roman tells.

With limited knowledge about how Russian laws are enforced, he started to think about the possibility that the army could call him for duty if the war escalated at the time of visiting his near relatives in Siberia. Roman Prokopenko has never had anything to do with Russia’s armed forces.

“Now, with the partial mobilization, this uncertainty is even bigger. I don’t know what can happen. Most likely I will not travel to Russia,” he tells.

“My father and two grandparents have invited me and I would really like to go if the circumstances were different. My grandparents start to get old,” Roman Prokopenko says.