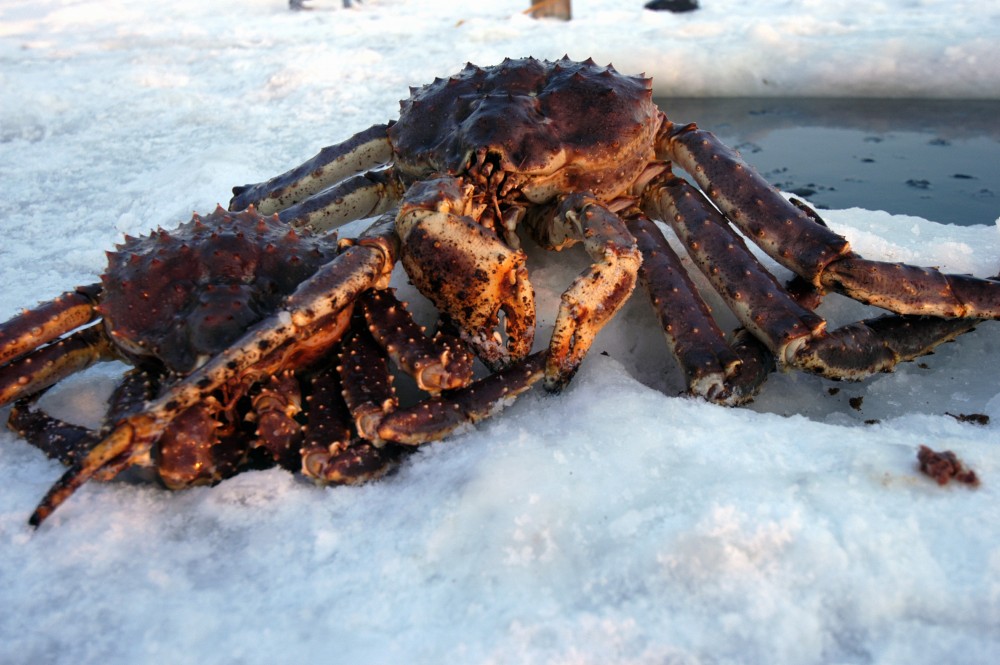 Tasty monsters: The red king crab is the largest of all crabs and is the most expensive per unit weight. Photo: Thomas Nilsen

Live crabs transported from Murmansk to Moscow for the first time

Pilot project in transporting live crab from the Barents Sea to Moscow by road has been successfully completed.
Read in Russian | Читать по-русски
By

The Antey seafood group has successfully completed a pilot project aiming to transport live crabs to the capital of Russia by trucks, FishNews reports.

Eight tons of live opilio crab, commonly known as snow crab, were transported from the Murmansk on the coast of the Barents Sea area to Moscow. The drive lasted 28 hours, at the end of which the crab arrived safely and alive to an ‘exposure hotel’ near Moscow’s Sheremetyevo airport to be monitored by specialists.

Previously, before Russia put a ban on import of Norwegian Sea Food, King Crabs from Bugøynes in Finnmark, were transported to Moscow for sale at exclusive restaurants.

The inventor of the Russian transportation method for snow crabs is Nikolai Perestoronin, the Director of the Murmansk Seafood Department of the Antey Group. In this transportation system, standard intermediate bulk containers (IBCs) were upgraded by having mechanical life support systems, in the form of boxes, attached to them.

Transporting the crab in solely IBCs would be difficult if not impossible as the creatures are extremely sensitive to their environment. The trip from the Murmansk region to Moscow is a long one, during which the crab had to be placed in an environment that fit its native one perfectly.

“For the first time, we transported a live crab by road. We used two trucks, each with 4 tons of crab in 16 IBCs filled with water. Each IBC was connected to a system that provides a continuous circulation of sea water alongside air supply. Additionally, the attached machinery kept the temperature constant between 1 and 3 degrees Celsius,” Perestoronin told FishNews.

To ensure that the pilot operation was successful, a team of observers were sent along to monitor the crab throughout its journey. Once the crabs arrived in Moscow, they were placed in a special ‘overexposure hotel’ for several days to be closely monitored after the relatively intense trip.

As soon as the crabs will have adapted to the new environment, they are expected to be sent further by plane to Southeast Asia.

This is not the first time Antey has conducted transportation of seafood across the country. Previously, the group of companies successfully conducted an experiment on the transportation of fresh-frozen crab from Murmansk to Petropavlovsk-Kamchatsky through the Northern Sea Route. Now several more options for logistics routes are being developed, including by railway.

When commenting on the reason behind the focus on new transportation technologies, Azamat Yusupov, Vice President for Development of Trade and New Technologies of the Antey Group, said:

“New realities forced us to look for new logistics routes and markets. This is a great opportunity for us. This pilot project has shown that we can open a direct air corridor between Murmansk and countries that buy live crab. Traditionally, these are the countries of Southeast Asia, but we are ready to develop new markets, for example, in the Middle East. The new transportation developments ensure that Russia we can deliver live crab in the best quality.”

Oddly enough, although the crab exists in abundance in the Barents Sea, the inhabitants of the Murmansk Region have an extremely restrictive access to it. The snow crab quota itself has been slowly increasing in the last few years with the new quota for 2022 being 3% higher than that of 2021 and landing nearly 47,000 tons, according to Alaska Fish News.  Despite this, a majority of the crab is exported.

According to Russia’s Federal Customs Service, over 90% of the crab harvested is exported abroad, Intrafish reported.

With the new transportation developments, it is uncertain whether this trend of exports will pivot towards the domestic market instead. Most likely this is not the case, especially considering that export prices for Russian crabs doubled in 2021 and that Yusupov stressed the importance of the project in creating easier routes from Russia to international markets.

However, with bans on Russian seafood from the United States, EU nations, and other countries, prices for Russian seafood exports have nearly halved since the end of February when Russia invaded Ukraine.

Perhaps “logistic routes”, as Yusupov stressed, are not the sole thing needing to be looked at when it comes to seafood; maybe a complete restructuring of Russia’s export model is due?