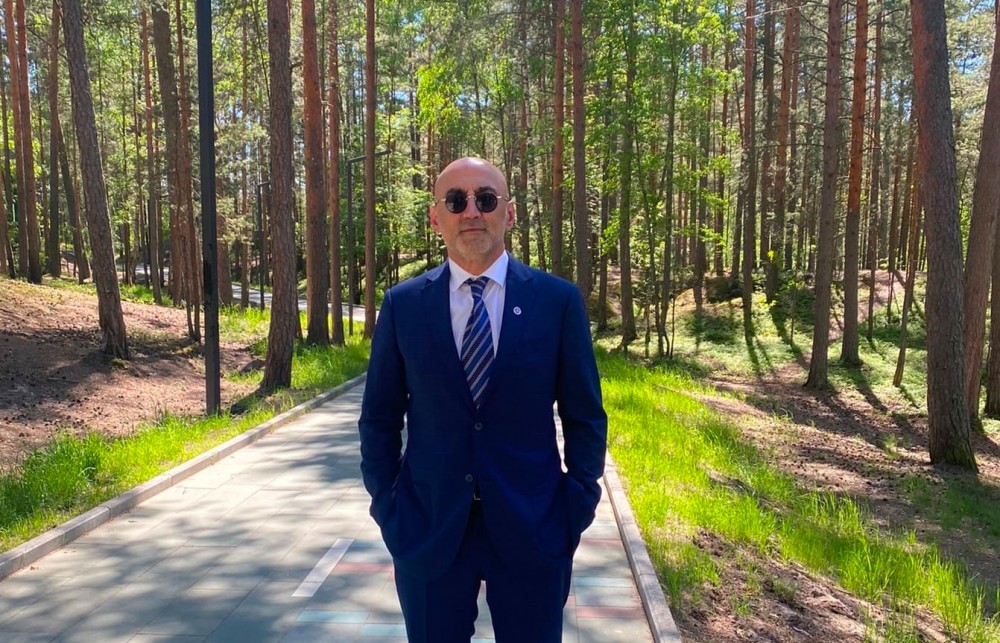 Renat Karchaa worked several years in Murmansk before he was hired by Rosatom. Photo: Karchaa at VK

Renat Karchaa was known for conspiracies and intrigues in north Russian media and politics before he became consultant to Russia's nuclear power company Rosatom.
Read in Russian | Читать по-русски
By

The man that last week popped up with representatives of the International Atomic Energy Agency (IAEA ) at the Zaporizhzhya Nuclear Power Plant has a long history from the north Russian region of Murmansk. Footage from the plant now occupied by Russian forces and controlled by Russian state nuclear power company Rosatom shows Renat Karchaa in a fancy suit guiding the international inspectors around on site.

The group of 13 inspector on 1st of September arrived to the Ukrainian plant that has been occupied by Russia since early March. They fear a nuclear catastrophe in the wake of Russia’s military aggression in the area.

However, according to Renat Karchaa, it is the Ukrainians, not the Russians, that pose a threat to the plant, and they specifically target plant employees, he told the international experts, state media RIA Novosti informs. In a video, he stands next to the remains of a shell, trying to explain how the rocket came from the Ukrainian side and “flipped 180 degrees before landing.”

Karchaa has a long history as PR advisor and political spin maker in several Russian regions. But it was in Murmansk that his career took off.

Not long after he moved from Abkhazia, the Georgian region, to the far Russian north in 2001 he became editor of Nord-Vest Kurier, a weekly newspaper that challenged the rule of Governor Yuri Yevdokimov.

Karchaa might have had plans to himself conquer the Governor’s office, and in 2002 he was sued by Yevdkomov for “slandering his reputation.” But instead, to everyone’s surprise, the newspaper editor was in 2003 invited by Yevdokimov to become deputy governor. In his position, Karchaa worked with relations with the regional duma, political parties, the press and did “information-analytical activities,” Regnum informed at the time.

Karchaa remained in the job only two years. After having successfully managed the election campaign of Yevdokimov in 2004, he was appointed to the job as Head of the Murmansk representation office in Moscow and in 2005 he moved on to become Deputy Director of Kola MMC, the regional branch of Nornickel.

In 2008, he was back in Moscow, now as Adviser at the Presidential Administration where he managed issues of Russian regional policy.

His career in Rosatom started in 2011 where he first worked as adviser to one of the company’s deputy directors and later with issues related to the nuclear military complex.

Later, he also briefly worked in Roscosmos, the Russian space agency, as well as for the for the President of the breakaway Abkhazia Republic. And he did consultancy for Putin’s United Russia Party in Arkhangelsk.

Renat Karchaa in the early 2000s also shortly worked in the Pskov region where he reportedly assisted the regional governor with a re-election campaign. During the visit, Karchaa ran over a 16 year old boy with his car. The teenager died and Karchaa disappeared from the site of the accident.

For two weeks, authorities in Pskov concealed the name of Karchaa. But thanks to witnesses on site, he was ultimately caught, Izvestia reported.

However, the PR consultant was soon back in normal. And he quickly hit back against critics. In a press release issued by the regional government of Murmansk, Karchaa is described as “a witness.” The crash “could not be avoided,” and the state official cooperates closely with the investigators, the press release reads.

Furthermore, Karchaa and his associates accused political opponents of using the crash for their own benefit.

According to the regional government in Murmansk, the accident in Pskov was actively exploited by political opponents of Karchaa, several of them “known for their connections with the criminal underground.”

“They try to picture an “enemy” of humanity,” the Murmansk Government argued.