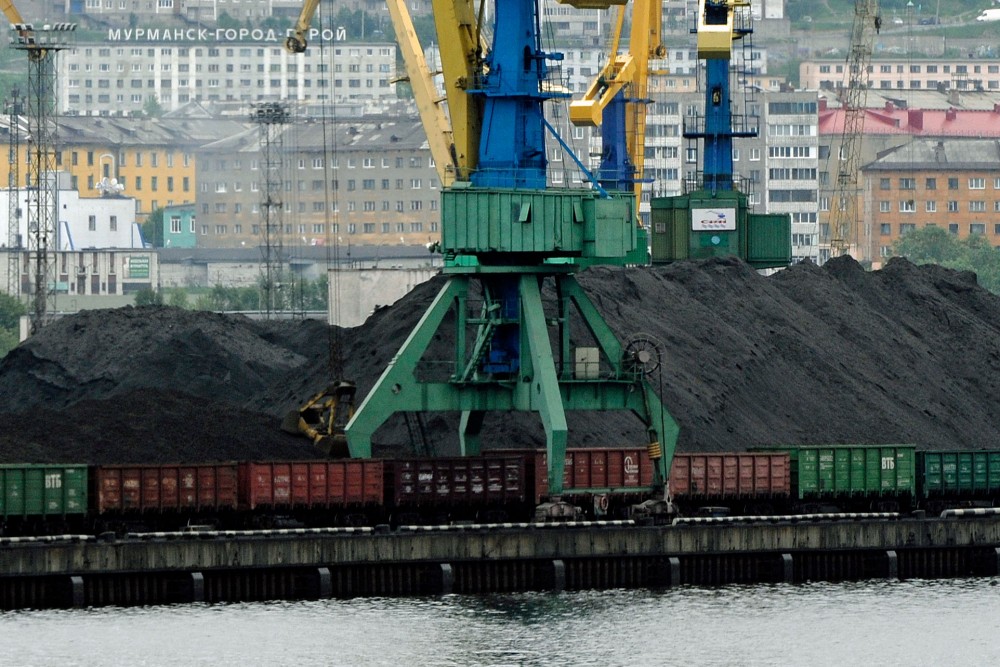 The Lavna coal terminal on the west side of the Kola Bay, a key pillar in the Murmansk Transport Hub project, may be postponed indefinitely.
Read in Russian | Читать по-русски
By

Most of Russia’s coal export shipped out from the ice-free port of Murmansk is heading to Europe, a market with a full-fledged commitment to be the world’s first carbon-neutral continent by 2050. Long before that, by 2030, climate gasses emissions will be cut by 60%.

Many countries within the union are phasing out coal faster than predicted, like Finland, which suggests coal-burning for power could be banned already by 2025.

Coal stands currently for 19% of EU’s electricity production, a share decreasing substantially from year to year. Coal prices are simultaneously falling. The EU’s consumption of solid fossil fuel (coal and lignite) was nearly halved over the last three decades, down from 383 million tons (oil equivalent) in 1990 to 210 million tons in 2018, according to statistics by the European Commission.

Murmansk, though, is betting on a long-term demand for coal. The port, where export of coal already stands for a substantial part of the tonnage, is currently expanding to the west side of the Kola Bay with giant new facilities, piers and railway connection.

Here, in Lavna, construction of the 32 billion rubles (€352 million) project is already well underway. Enormous amounts of rock are blasted away at what will be Murmansk Transport Hub. A side-track of the October railway is under construction with a few tens of kilometers of lines, as well as the huge storage facilities uphill from where the quays will be built. The new coal port constitutes the biggest part of the project, although also fertilizers and iron ore will be shipped out from the new facilities to the world markets.

Major shippers of coal have not signed anticipated agreements with the new terminal, Kommersant recently reported.

The launch of the coal port, originally scheduled at the end of 2020, may now be postponed indefinitely, the newspaper could tell from inside sources in the coal businesses.

The terminal “will not be” a company-investor said.

With a planned capacity of 18 million tons annually, the new terminal would serve the important coal-mining region of Kuzbass in southwestern Siberia from where the coal is transported by rail to Murmansk, a distance of several thousand kilometers.

For the citizens of Murmansk, who have lived with the current black-dusty-blowing coal port, literarily speaking in the center of the city, for decades, a new terminal across the Kola Bay would be most welcomed.

Murmansk is during wintertime infamous for its black snow and dirty windows.

Russia’s export of coal will drop by up to 22% in 2020, according to estimates presented by Minister of Energy, Aleksandr Novak, Rossiya Segonya reported.

Although mainly blaming the coronavirus for the drop in demand for coal, the minister admitted a stronger climate agenda effects negatively Russia’s coal export.

Russia is the world’s third-largest exporter of coal, and coal’s share of the total export cargo (in tons) through the country’s seaports exceeded 50% in 2019, VTimes recently reported.

Experts talking to Kommersant, however, warn against big investments into export facilities for coal like the one in Lavna outside Murmansk.

“Decarbonization of the European Union is a long-term trend. To transport coal from western ports to Asia is possible at certain moments for the market, but it is too risky to bet on such developments,” said Maxim Khudalov with ACRA (Analytical Credit Rating Agency).

Concentrating on one type of load is a “dangerous strategy,” Khudalov said.

Russia’s coronavirus recovery plan has no space for renewables