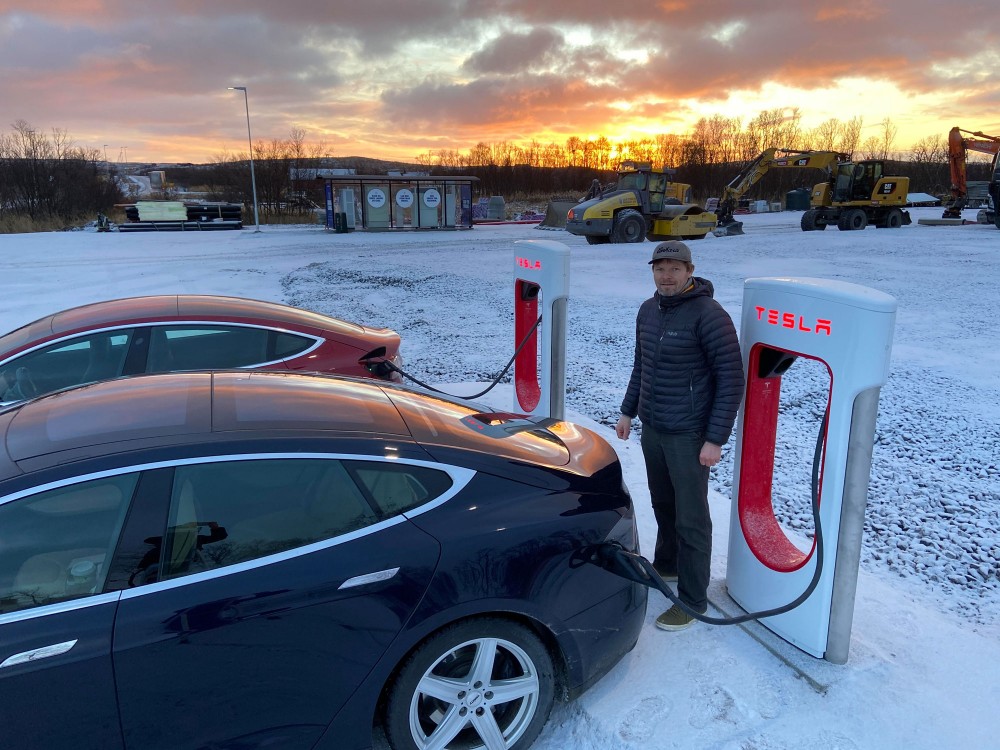 70 DEGREES NORTH - Long-distance winter drive through remote areas with electric cars in northernmost Europe is becoming safer and more reliable as a comprehensive network of Supercharger and high-power stations are switched on.
Read in Russian | Читать по-русски
By

Varangerbotn, some 400 kilometers inside the Arctic Circle, is the most faraway location Tesla has turned on the power anywhere on the European continent. The two nearest Supercharger stations are Puoltikasvaara (Sweden), 623 km to the south, and Sørkjosen (Norway) 562 km to the west.

“This makes it a lot easier to get around,” says Finn Helge Lunde. He was first in Norway’s northernmost region Finnmark to acquire a Tesla Model S back in 2013.

Getting around, especially in freezing winter months, wasn’t always easy.

“Those days, long-distance driving was all about finding powerful domestic wall sockets. Now, the charger in Varangerbotn fills up the battery faster than the quick walk down the road to grab a hot dog at the old-fashion gas station.”

Lunde hopes the new Superchargers will help spark interest in electric vehicles for people living in the north.

That is still a long way to go. Figures from Teslastats show that of 53,700 Teslas sold in Norway, only 82 are registered in the Finnmark region. For the country as such, 2020 will be the first year with more than 50 percent of all new sales are full-electric cars. In Finnmark, the figure is 11 percent.

“A good, reliable network of chargers is key infrastructure before we will see a boost in sales,” Finn Helge Lunde argues.

“Especially so up north, where we have long distances between settlements or towns. Driving on polar dark snow-covered winter roads with low temperatures, and hazardous weather conditions, could shorten the range of your battery dramatically,” Lunde tells.

“The new network of Superchargers and the other fast chargers established by the regional power companies not only make long-distance driving easier, it’s also a question about safety,” Finn Helge Lunde says.

These are not the roads where you wanna run empty of battery. With an expanded network soon up and charging, that challenge is solved.

Two years ago, Tesla CEO Elon Musk promised 100 percent Supercharger coverage in Europe by the end of 2019. From Ireland to Kiev, from Norway to Turkey.

Yes. Supercharger coverage will extend to 100% of Europe next year. From Ireland to Kiev, from Norway to Turkey. https://t.co/7FQZgLCTVJ

The network of chargers by the California automaker has developed rapidly, but so far the northeastern corner of Europe remained a white spot. Until now.

Ten new Supercharger stations inside the Arctic Circle in northern Scandinavia are in the pipe. The network is geographically well distributed throughout the region and the chosen locations are at the main crossroads. In northern Norway, Supercharger stations are to be opened in Karasjok, Kautokeino, Skaidi, Alta and Evenes. In Finnish Lapland, Karesuvanto and Inari are chosen, while Abisko and Jokkmokk in Sweden’s Norrbotten county are soon to come.

Even Sandvold Roland from Tesla Norway says to the Barents Observer that COVID-19 has complicated the process of building new charging stations, but that the network is expanded as quickly as possible.

“For Tesla it is both symbolically and practically important to get the northernmost stations in place so that the whole country is connected to the Supercharger network. We want it to be possible to travel long distances with electric cars across the whole country, and will make it easy to move around even in the regions with long driving distances.”

As previously reported by The Barents Observer, local power companies in Troms and Finnmark county, with financial support from the Norwegian state, are deploying a network of 17 high-power 175 kW chargers and eight 50 kW fast chargers. By November 20, nine of the stations are opened, while most of the remaining will be connected to the grid before Christmas.

No roads throughout the region will have more than 100 km between each charging station. Troms and Finnmark county is twice the size of Belgium.

In Varangerbotn, the three V3 250 kW stalls by Tesla are placed with space enough to easily accommodate future Cybertrucks with trailers and possible Semi trucks. A station with 150 kW fast-chargers available for other electric cars is placed next to Tesla’s stalls.

Disclaimer: The Barents Observer drives electric and supports the world’s transition to sustainable energy. None of our reporters have any stock ownership or other economical benefits from companies mentioned in any articles.