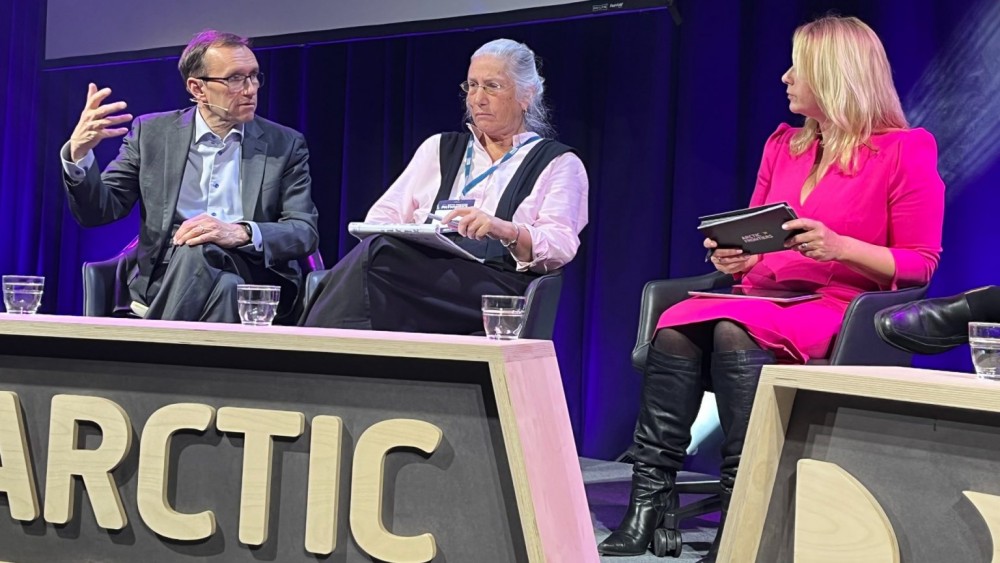 The acceleration of the green transition as Europe reduces its dependence on Russian oil and gas will be an important step for the Arctic and its economy, Norway’s Climate and Environment Minister Espen Barth Eide said on Wednesday. Barth Eide (left) is pictured here on an Arctic Frontiers panel with Sue Biniaz, deputy special presidential envoy for climate at the U.S. Department of State (middle) and moderator Susannah Streeter (right). Photo: Eilís Quinn

Will the green transition be the new economic motor in the Arctic?

TROMSØ, NORWAY: Russia’s invasion of Ukraine has ruptured Arctic cooperation and raised questions about the ongoing impacts on everything from northern communities to climate science. But as Europe races to decouple itself from Russian energy, the accelerated green shift may have positive impacts for the North, Norway’s Climate and Environment Minister said on Wednesday.
Read in Russian | Читать по-русски

“We are deeply worried about what’s happening with Arctic cooperation because of the war, but on whether climate will be a victim, I’m not so sure,” Espen Barth Eide told the Arctic Frontiers conference.

“Here in Europe the [orientation of] the EU and the UK is the need to decarbonize faster. Because now, on top of the climate argument, we need to get rid of our dependence on Russian oil and gas. That’s going to drive a faster energy transition. It’s also going to drive a faster circular economy, because you also see this register in supply lines for raw materials. You have to be wiser in the use of those materials, recycling and reusing.”

Barth Eide said Norway believed closer economic and political ties with Russia in the North would turn the region into an important oil and gas region.

The Barents region covers an area of 1.75 million square kilometres and includes the northern parts of Sweden, Finland, Norway and Russia’s western Arctic. Formal cooperation in the Barents region was established in 1993.

But the Russian invasion of Ukraine has fundamentally transformed his country’s Arctic policy, Barth Eide said in a statement before speaking at Arctic Frontiers.

“Developments in Russia have taken a completely different direction than we hoped, and the world is heading into a comprehensive energy transition where fossil energy demand will fall in the long run,” he said.

“Green transition and strengthened cooperation with the EU-Arctic countries will be the most important motor driving Norwegian Arctic policy.”

No excuse to grab land

However, Saami representatives at the conference this week, say that the green transition must not be used as an excuse for increased development in Sapmi, the traditional Saami homeland that covers the arctic regions of Finland, Sweden, Norway and the westernmost part of Arctic Russia.

“[We] need to indicate where the break is when [governments] are looking for the gas peddle for the green transition,” Christina Henriksen, president of the Saami Council, told the conference this week. “I understand there is a need to do something, a move forward and to maybe even do it fast, but we cannot risk our future and our exitance on this.”

Initiatives like wind power that have been widely promoted in the South as progressive climate policy, have actually had devastating consequences on Sami reindeer herders, where wind farms have cut off grazing lands and interrupted reindeer migration routes.

“The green transition cannot drive away those that already inhabit [the Arctic],” Henriksen said. “We depend on the land. No windmill can replace what the land means to the Indigenous Peoples of the entire Arctic.”

Must be at the table

Sara Elvira Kuhmunen, first vice chair of World Reindeer Herders and a Sami woman from Jokkmokk, Sweden, says she sees history repeating itself when it comes to the South making economic and political decisions that will have longterm impacts on Indigenous lands and livelihoods.

“One very important thing is to actually include us in the decisions,” she said. “We have knowledge about these areas and about what works.”

Saami youth are facing increasing pressures on their culture and way of life from climate change, existing industrial pressures and the legacy of colonialism and their voices in particular need to be heard, Kuhmunen told the conference.

“We are going to live with the consequences of everything, but we are being ignored,” she said. “We come with our voices but still people aren’t listening.”

“We have the knowledge. We were here before the national borders were introduced and it’s still our home.”

Barth Eide said it’s imperative to involve Indigenous people in the green shift, as well as have honest discussions about the demands green energy projects can put on the natural environment and what can be done to address it.

Barth Eide says Norway’s environmental directorate is now looking at a nature budgeting strategy and how that can be incorporated into decision making, the same way emissions costs are now considered during new initiatives.

And once the circular economy is established—a term used to describe where markets are oriented towards recycling and reusing resources, instead of just consumption of them—new structures will not need to be repeatedly set up, he said.

“You need to recognize that the green transition requires at lot of minerals and rare earth minerals, and that requires mining. You can’t leave it all to [other countries]. We’re very clear on that, if you want to have a green transition, you have to find the resources also at home and you have to do it in an environmentally friendly way of course try to reduce all second grade tertiary effects of that.”