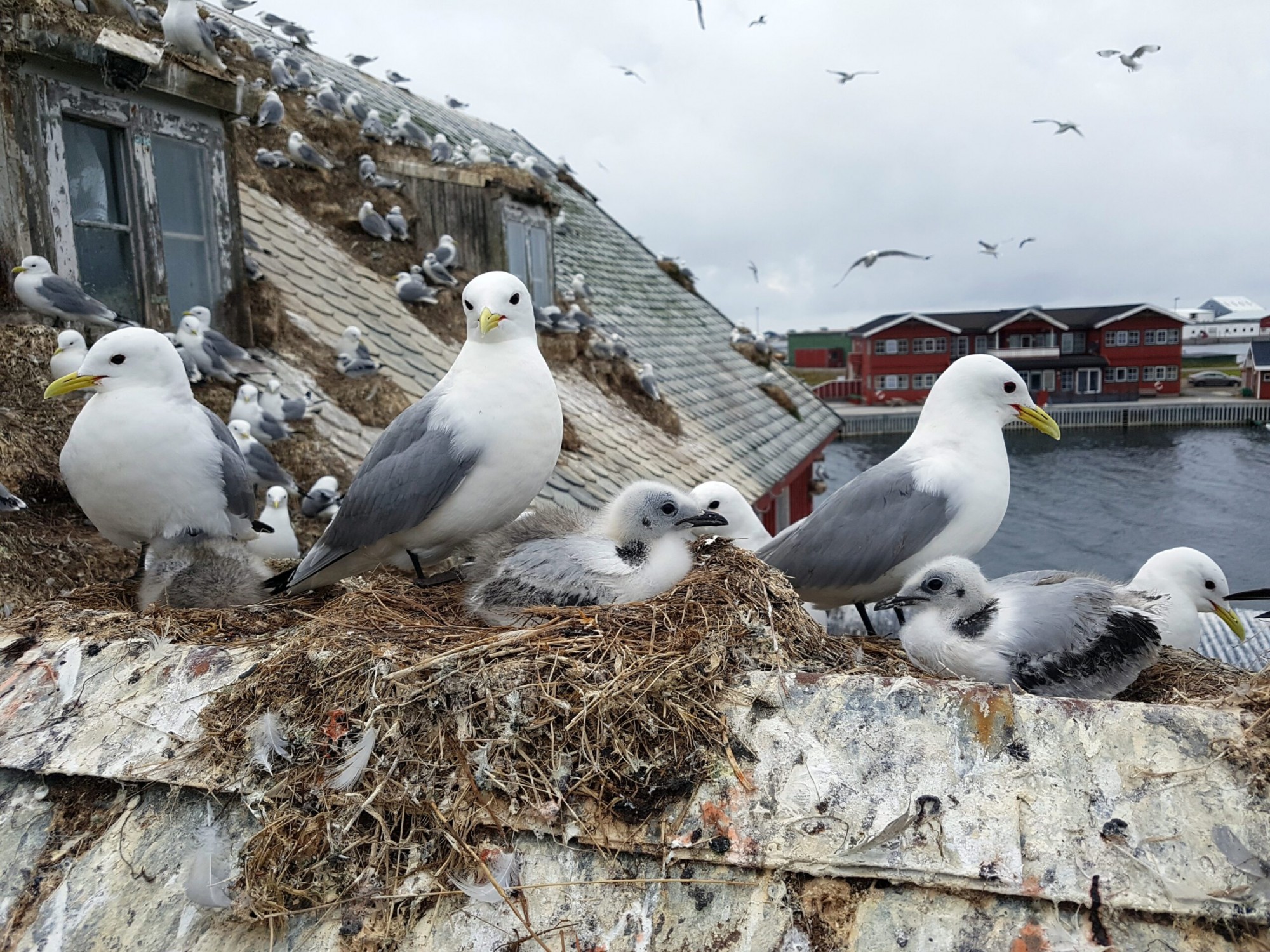 The kittiwake needs support to survive

The black-legged kittiwake is in danger of going extinct from the bird cliffs along the Norwegian coast. Could urban kittiwake hotels and alternative nesting sites help save this little seagull?

The black-legged kittiwake (Rissa tridactyla), a small gull that feeds on the surface of the ocean, is the most numerous gull in Norway. However, the population has declined rapidly in many parts of the North Atlantic over recent decades. The decline in Norway is complex and not fully understood, but food shortages – both during winter and in the breeding season – and increased predation are likely important factors.

Faced with a changing environment, the kittiwake has an ace up its sleeve. It has proven to be unusually flexible in its choice of nesting sites. Kittiwakes normally breed in colonies on narrow ledges on steep nearshore cliffs, but also appear to thrive on man-made structures such as buildings and bridges.

When life on the coast gets difficult, some kittiwakes decide to move to towns and cities. But where are they to live? The kittiwake is not aggressive, nor will it steal your food, but it can still be a nuisance, since colonies of these birds make a great deal of noise and produce mounds of poop. For this reason, few people want to have a kittiwake colony as next-door neighbour. At the same time, measures taken to drive kittiwakes away from buildings subject the birds to stress, making it difficult for them to bring up their chicks.

Researchers at the Norwegian Institute for Nature Research (NINA) are trying to figure out how to give the birds an alternative place to nest where they won’t be in conflict with human city-dwellers. This would enhance their ability to breed successfully, which is a prerequisite for turning around the negative trend the kittiwake population is experiencing.

“Ideally, we would ask the kittiwakes what the perfect nesting site looks like. Instead, we’re researching alternative nesting sites,” says Signe Christensen-Dalsgaard, researcher at NINA.

The researchers are working on identifying nesting sites favoured by kittiwakes, the structures where they are most inclined to build their nests, and estimating the breeding success of kittiwakes nesting at different sites. This knowledge can bring us closer to understanding what works and where kittiwakes are likely to nest.

Seabirds are adapted to a harsh coastal existence, but in recent decades breeding failures have become the rule, rather than the exception for many species. Seven of ten gull species that nest in Norway are now included on the Red List, and of these it is the kittiwake that is in greatest peril. Food shortages and predation by corvids, gulls, and white-tailed eagles are considered some of the main reasons why kittiwake populations are plummeting, but this is a complex puzzle and scientists still lack many pieces.

“Along the coast of the Norwegian mainland, the kittiwake population has declined by 60 to 80 percent,” says Tone Reiertsen, researcher at NINA. “Forecasts show that the kittiwake could disappear from Norway’s bird cliffs within the next 40 to 50 years, which would represent a dramatic downturn for the species.”

Kittiwake colonies are usually located on narrow ledges in steep, coastal cliffs, but the species is exceptionally amenable to nesting at other sites. The birds will nest on buildings, bridges, and other structures created by humans, and the kittiwakes that choose such nesting sites are the ones we define as “urban”.

Eats only small fish and crustaceans

Unlike many other gulls, kittiwakes are not lured to urban areas by the availability of food. They live exclusively on small fish and crustaceans and obtain all their nutrition from the sea. But human settlements may offer kittiwakes shelter from extreme weather and protection from predators.

“The movement of kittiwakes into towns and cities is a warning that the situation along the coast and out at sea is not as it should be. There is no doubt that the kittiwake is experiencing major changes in its natural environment,” says Signe Christensen-Dalsgaard.

Research shows that kittiwakes nesting in close proximity to people often produce more fledglings than those in colonies in natural bird cliffs. Perhaps urbanisation could help preserve the species for the future? However, this requires that we are able to find solutions that allow kittiwakes and humans to coexist.

“Kittiwaaake, kittiwaaake!” The nasal call that gave this little gull its name can become a constant torment for neighbours who live close to the colony, especially when they hear it both night and day.

However, preventive measures and attempts to chase away the kittiwakes do not always have the desired effect. Experience suggests that once a kittiwake has established itself, it will not leave an area voluntarily; if prevented from nesting at that site, will instead move to nearby buildings. And regardless of that, from the time when the kittiwakes arrive at the nesting site, disturbing them or removing them is strictly prohibited. This also applies to nests without eggs or chicks.

In several places in Norway, artificial nesting sites have been built to reduce the level of conflict. But will the kittiwakes choose to use them?

Looking for ways to coexist

Through the “Urban Kittiwakes” project, Reiertsen and Christensen-Dalsgaard are now collecting information about urban kittiwake from all over the country. One of their goals is to find out why the kittiwakes are migrating to cities, what kinds of “neighbourhoods” and structures they prefer as nesting sites, and how many chicks the kittiwakes manage to raise successfully in various places in Norway.

“We hope that this will give us more knowledge about how to achieve a better coexistence between kittiwakes and humans,” says Tone Reiertsen.