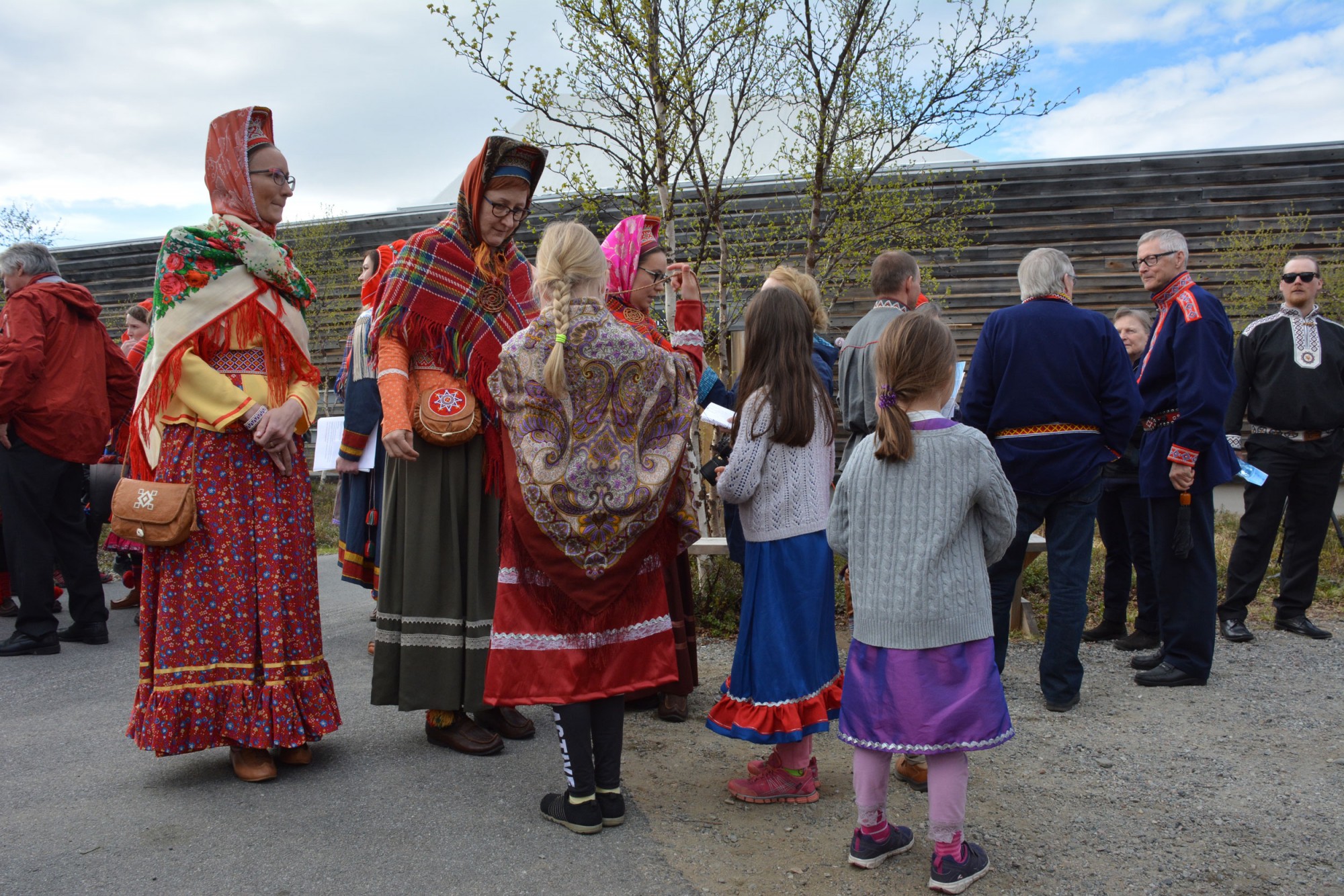 It was a day of celebration for the Sami representatives who crossed the borders from nearby Finland and Russia to take part in the long-awaited opening of the museum in Neiden, the Norwegian Skolt Sámi village.
Read in Russian | Читать по-русски

Hundreds of people on the 16th June assembled on the sandy grounds of Neiden, the village located only a stroll from the border to Finland.

This is the ancient home of the Skolt Sámi people. And on this day, they came from all parts of their historical land, an area stretching across the borders of what today is Russia, Finland and Norway.

It is not a big building, the new museum. But its importance for the Skolt Sámi is significant.

«This museum is important because it connects our Russian, Finnish and Norwegian Skolt Sámi», says Tiina Sanila-Aikio, the President of the Finnish Sámi Parliament.

The new institution has got the name Äʹvv, which in the Skolt language means «reflection of springtime sun on crisp snow».

Sanila-Aikio, herself a Skolt Sámi, underlines that the situation for the local Sámi people is «very fragile» and that there are «many, many challenges». At the same, much positive has happened over the past few years.

«Young people are again starting to speak Skolt Sámi, learn the handicrafts and practice the traditional livelihood», she says to the Barents Observer.

In her speech delivered during the official opening of the museum, Sanila-Aikio highlighted the need for preservation of the traditional Skolt Sámi lands. «Local waters and lands now more than ever need their protectors», she underlined.

«If we are to move our people into the future, with our language and our culture, then we can not subject the area to a lifestyle which harms the nature».

Sanila-Aikio has since 2015 headed the Sámi Parliament in Finland. The legislative body is located in a brand new facility in the town of Inari. Next door is Finnish broadcaster Yle, which delivers daily news reports in the Skolt language.

The Sami President has herself been a pioneer in promoting Skolt culture. In 2005, she released the rock album Sää´mjânnam rocks! («Sapmi rocker!»), the first ever album of its kind in the Skolt Sámi language.

The Skolt people was divided when national borders were drawn in the 19th century. Later, they became victim to revolutions, wars and repression. Many were forced to leave their historic lands and resettle on the other sides of the border, first of all in the Finnish villages of Inari, Kevinärvi, Sevettijärvi and Nellim.

Sevettijärvi is today among the places where the Skolt Sámi language and culture is best preserved. The Skolt Sámi people is today believed to count about 1,200 individuals.

However, the first ever Skolt museum was still built on the Norwegian side.

In Neiden, many of the about 250 local inhabitants are of Skolt origin, although few speak the language. A couple of hundred meters down the river from the museum is the St. George’s chapel, a tiny church building originally erected by Trifon, the Russian monk who in the early 16th century played a key role in the christening of the local Sámi people. Trifon built up a monastery in Pechenga, the area which today is part of Russia’s Murmansk Oblast, and worked as a missionary in the whole region.

Since those days, the Skolts have confessed the Russian Orthodox faith.

Until early 19th century, there were no national borders in this area and the Sámi people could freely take their herds of reindeer around, from east to west, north to south; from Petsamo, Zapadaya Litsa and Neiden on the Barents Sea coast to the nearby forest lands of Pasvik and Inari.

Then, in the 20th century, it all changed. The power takeover of the Bosheviks in 1917 resulted in a halt in free traveling. In 1944, Finland was forced to secede the Pechenga (Petsamo) area to the Soviet Union which resulted in mass evacuations of people westwards. The Skolt Sámi people had lost their land to colonisers and geopolitics.

«This museum can help us tell our story», says Zoya Nosova. She soon turns 80 and is one of about 30 Russians with Skolt heritage attending the museum opening.

Nosova’s ancestors came from Titovka and she was herself born in Zapadnaya Litsa on the Russian Barents Sea coast. Both places are today heavily controlled by the Russian military and closed off for normal people. In Zapadnaya Litsa, the powerful Northern Fleet has one of its nuclear submarine bases and more than 10 thousand people live in the closed Navy town of Zaozersk.

While most Skolts in the area in the early 20th century emigrated to Finland, Nosova’s family remained on the Russian side.  She has lived most of her life in Verkhnetulomsk, a small town an hour’s drive from Murmansk city. According to Nosova, she is the only person left who know the five local Skolt Sámi dialects of Notozersky, Motovsky, Petsamsky, Pazretsky and Songelsky.

«I know all these languages, can speak them all and translate them», she says. «I am almost 80 years old and might not live that much longer. But my works, my conversations, my writings and translations will remain here, in this museum», she proudly adds to the Barents Observer.

«I am almost 80 years old and might not live that much longer. But my works, my conversations, my writings and translations will remain here, in this museum».

Originally, there were seven Skolt Sámi siidas (areas) stretching across what is now Russia, Finland and Norway. Neiden is the westernmost of these areas.

It was party and celebration as the museum opened. But the process has been long and windy. Construction started already in 2007 and the building was to open in 2009. Instead, delay followed delay because of numerous technical problems.

«Today is not the day to talk about all the problems», says Museum Director Honna Havas.  «This is a fantastic day, hundreds of people have come to take part in the event and they are all so happy», she underlines.

«This is a fantastic day, hundreds of people have come to take part in the event and they are all so happy».

According to Havas, feedback on the exhibition is excellent.

Normality has finally come to the director of the Äʹvv Skolt Sámi Museum. She is ready to welcome visitors all through summer, and in fall school classes from the area will come one after the other.

The Skolt Sámi people is ready to tell its story.