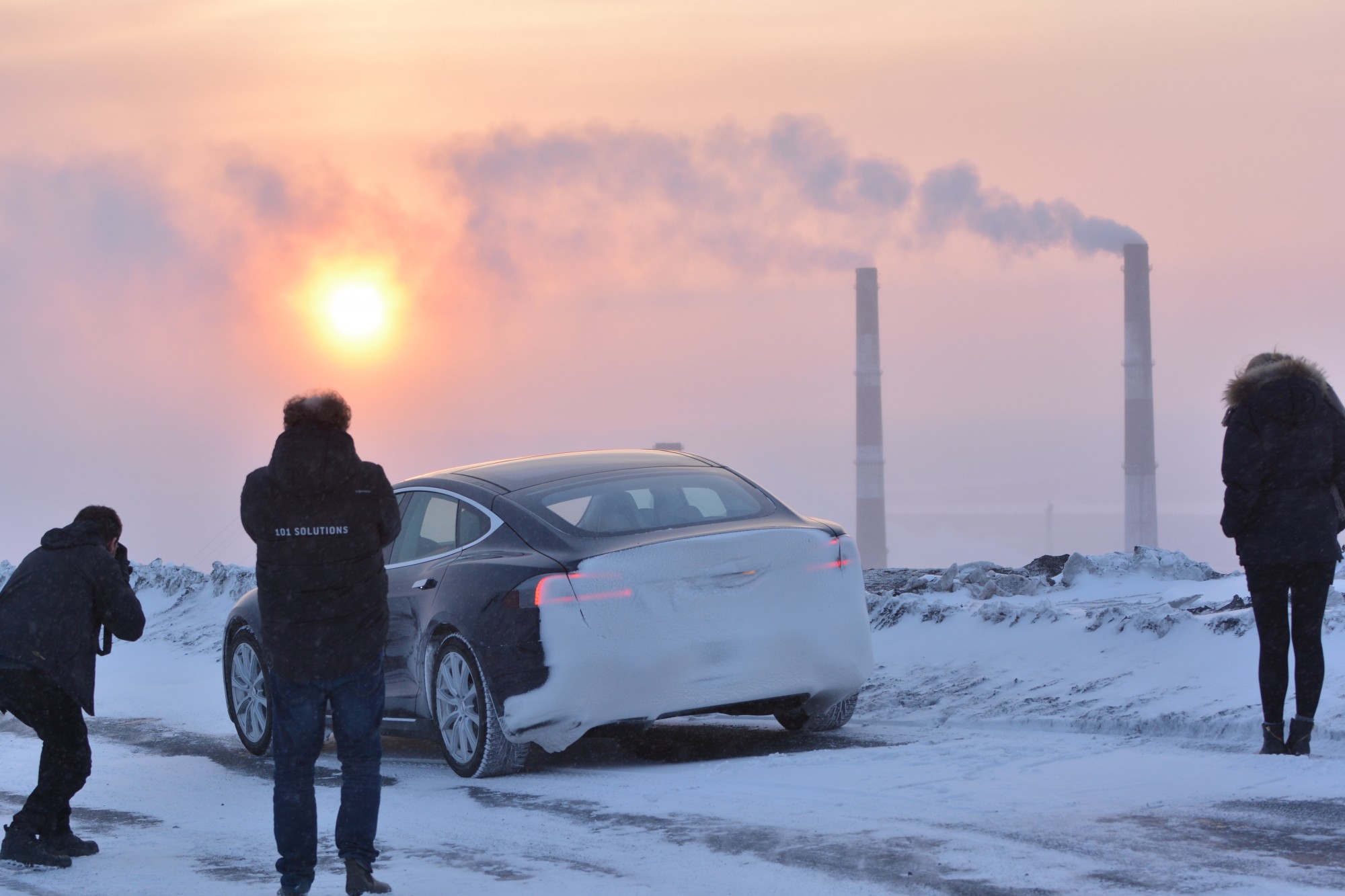 Tesla’s lithium ion batteries contains nickel. Here in front of the smelter in Nikel near Russia’s border to Norway in the north. Photo: Thomas Nilsen
How green are the batteries?

Nornickel eyes sharp increase in demand for nickel and copper as tens of millions of electric cars hit the roads over the next few years.
Read in Russian | Читать по-русски

That is very good news for Nornickel, one of the world’s largest suppliers of both nickel an copper. With factories on the Taymyr Peninsula and in the Murmansk region, the company’s directors are smiling all the way to the bank. And back. With workers’ salaries to be paid in rubles, and sales abroad in dollars, Nornickel is benefiting from Russia’s turbulent economy with low currency rate.

Nornickel now wants to expand sales to the electric car industry. Recently the company signed an agreement with BASF on possible supply of raw materials for future battery material production for lithium-ion batteries in Europe. Through the agreement, BASF would receive metals from Nornickel’s Harjavalta refinery in northern Finland and get nickel and cobalt feedstock from the Russian mines. Cobalt is a by-product of copper and nickel mining.

BASF, a leading provider of cathode materials to battery production in both Asia and the U.S. market, intends to expand production to the supply chain for electric car batteries in Europe. The company intends to invest up to €400 million in a European plant for cathode production.

«A cooperation with Nornickel will provide the foundation to further expand BASF’s access to the developing cathode materials market in Europe and participate in growth opportunities in this region,» says media relations contact Christine Haupt to the Barents Observer.

Worldwide electric car stock surpassed two million vehicles in 2016 after crossing the one million threshold in 2015. Sales are growing fast and customer waiting lists get longer. In Norway, where the state has introduced a number of impactful incentives making electric cars competitive, 19% of all sales are today fully electric. If you order Opel’s new Ampera today, you will likely not get it before 2019. Demand is bigger than supply. More than 130,000 battery cars are already on the roads in Norway, not bad for a country with slightly more than five million inhabitants. Transition to electric vehicles continues. The government aims at a 2025 goal when petrol cars will no longer be sold in the country.

Great Britain, France and India move in the same direction, saying they will ban sales of petrol and diesel cars by 2040. All part of a plan to meet the Paris climate accord.

The car industry understands the point governments and consumers are making. Like Volvo, who says all new models from 2019 will either be fully electric or hybrids. VW, the largest carmaker in Europe, says a series of high-volum electric cars will be launched from 2020 with a goal to have eight electric models on the market before 2025. Tesla, the largest pure electric car manufacturer, will deliver 200,000 cars to the market this year and has a planned production rate of 500,000 cars for 2018.

By 2030, there might be over 200 million electric cars globally.

A challenge for all carmakers though, is how to ramp up production of batteries.

To achieve its planned production rate of half a milion cars next year, Tesla alone will require today’s entire worldwide supply of lithium-ion batteries. Instead, Tesla is building its own Gigafactory in Nevada, big enough to supply the company’s demand. For now. The 455,000 square meters large factory, the biggest building in the world, will entirely be powered by renewable energy sources.

Tesla, however, will not reveal where the nickel and cobalt to the factory is coming from. Questions from the Barents Observer about where Tesla buys its nickel, from Nornickel in Russia or from other suppliers, remain unanswered by both the U.S. and EU offices.

Tesla CEO Elon Musk has ambitious plans. He said earlier this summer that two or three more Gigafactories are to be built in the United States. If so, Tesla alone will triple today’s global production of lithium-ion batteries within a few years. But Tesla is not alone, so battery production worldwide will by far surpass a tripling. According to Bloomberg, Chinese producers has plans to provide almost 3,5 times more gigawatt-hours of battery cells per year than Tesla’s Gigafactory by 2021. China is also the fastest growing market, accounting for more than 40% of all electric cars sold worldwide last year.

Several factories are under planning also in Europe, like Swedish Norhvolt who is considering Skelleftå as location of what will be the world’s northernmost electric car battery production.

All factories for either lithium-ion, or nickel-metal hybride batteries have one thing in common. They need nickel and cobalt. A lot of it. Nornickel estimates the use of nickel for batteries will more than triple, from 30,000 tonnes a few years ago to over 100,000 tonnes by 2020.

According to the portal electrec, battery cathode in a Tesla car consist of 5% aluminum, 15% cobalt and 80% nickel. No doubt, electric vehicles growth will give the demand for nickel and cobalt. Two-thirds of global nickel production is today used in production of stainless steel. 5% is used for car batteries, but according to analysts, this figure can rise to 20% within ten years.

Aiming for supply of metals to the electric car industry, Nornickel will have to work on its environmental image. After all, be green and minimizing environmental footprints is a major argument for most people choosing to buy an electric car.

North of the Arctic Circle, the company has been a dark star in the fragile nature. Polluting sulfur dioxide and heavy metals over the Siberian tundra since Stalin’s Gulag prisoners first started to mine there in the 1940s. Norilsk is infamous for being the most polluted town in Russia, and by far the darkest chapter in Arctic industrialization.

Nornickel’s factories on Taymyr and Kola are surrounded by ecological disaster zones difficult to subscribe.

On the Kola Peninsula, Nornickel’s subsidiary Kola GMK has set footprints in the nature difficult to subscribe. An ecological disaster zone surrounds the smelter in Nikel, near Russia’s border to Norway. For kilometers after kilometers in the main wind direction from the factory is dead nature. Dead trees and soil without, or with very little vegetation. Similar dead nature areas are found around the mining town of Zapolyarny and in Monchegorsk where the company has its refining plant that process high-grade nickel matte received from both Norilsk and the smelter in Nikel.

With around 100,000 tons of sulfur dioxide emission annually, the factories in Zapolyarny and Nikel have for decades been a thorn in bilateral relations between Norway and Russia. In Norilsk, emissions are even higher.

Vadim Malkin with the London-based strategy and communications consultancy company Transitional Markets Consultancy helps Nornickel with its media relations. He says to the Barents Observer that Nornickel works hard to improve its environmental records.

«It is of strategic importance to Nornickel as a key player in the supply chain that is enabling the growth of electric vehicles and clean energy solutions to improve its environmental profile and they are working hard to fight the legacy problems amassed over the decades of environmental neglect during the Soviet era,» Vadim Malkin says.

Christine Haupt says BASF has asked Nornickel to participate in the Together for Sustainability audit, an initiative of leading chemical companies, to address questions specific for the mining industry, including ecological and social aspects.

«BASF expects all our suppliers to support, embrace and enact the Environmental, Social and Governance (ESG) standards which are based on the ten principles of the United Nations Global Compact initiative and the global chemical industry’s Responsible Care program,» Haupt says.

She asserts BASF evaluated several options in the world market on where to source nickel in a sustainable way to serve the European market.

«BASF and Nornickel have a long-term and reliable business relationship. According to our Supplier Code of Conduct, we regularly verify our suppliers’ compliance with applicable laws and adherence to internationally recognized environmental, social and corporate governance standards by conducting external audits and sustainability assessments.»

Christine Haupt though, will not disclose the results the sustainability assessments. «Results of BASF’s assessments and related action plans are not public, because we respect our suppliers’ request for confidentiality and intellectual property rights concerning the questionnaire.»

Nornickel claims to be the best on environmental investments.

Sustainability advisor for Nornickel Vadim Malkin says the company, despite its poor historic impacts on nature, now is seriously improving and is performing best among its peers in terms of environmental investments.

«It has embarked on a major multi-billion modernisation program aimed at making the company the global leader in sustainability among mining companies and has achieved significant progress in reducing its environmental footprint,» Vadim Malkin explains.

Not everyone is convinced about the color of Nornickel’s new image. A leading expert on the company’s environmental records is Lars Rowe, Senior Research Fellow and Director of the Russia Programme with the Fridtjof Nansen Institute in Norway. He says there are reasons to doubt any serious reduction in pollution.

«Nornickel is a company very much in the mould of Russian heavy industry at large: Both historically and presently, its production sites are sources of intense environmental damage. Nornickel has long been one of the heaviest polluters in Russia, if not the Northern hemisphere. The company has not responded in any meaningful way to outside incentives and pressures to curb its transboundary pollution,» Lars Rowe spells out.

Statements about environmental awareness is more of a greenwashing.

He believes the company’s current statements about environmental awareness is more of a greenwashing. «Nornickel has of late wanted to appear more environmentally aware - greenwash its image, so to speak. At the same time, its various industrial sites still emit vast amounts of sulphur dioxide and heavy metals. It seems prudent to relate to any information stemming from the company, and which is uncorroborated by other independent sources, with strong skepticism,» Lars Rowe says to the Barents Observer.

«It has reduced the use of coal by 49% and invested over $100 million in a hydro power plant lifetime extension project enabling to prevent over 2.2 million tonnes emissions of CO2 equivalent per year. It has decommissioned its Norilsk smelter and is replacing outdated equipment on its other sites, including the Talnakh concentrator and Nadezhda Metallurgical plant, which led to a significant reduction in sulphur dioxide pollution in Norilsk,» Malkin points out.

Talking about the factories on the Kola Peninsula, Malkin says both air-pollution and wastewater pollution are decreasing.