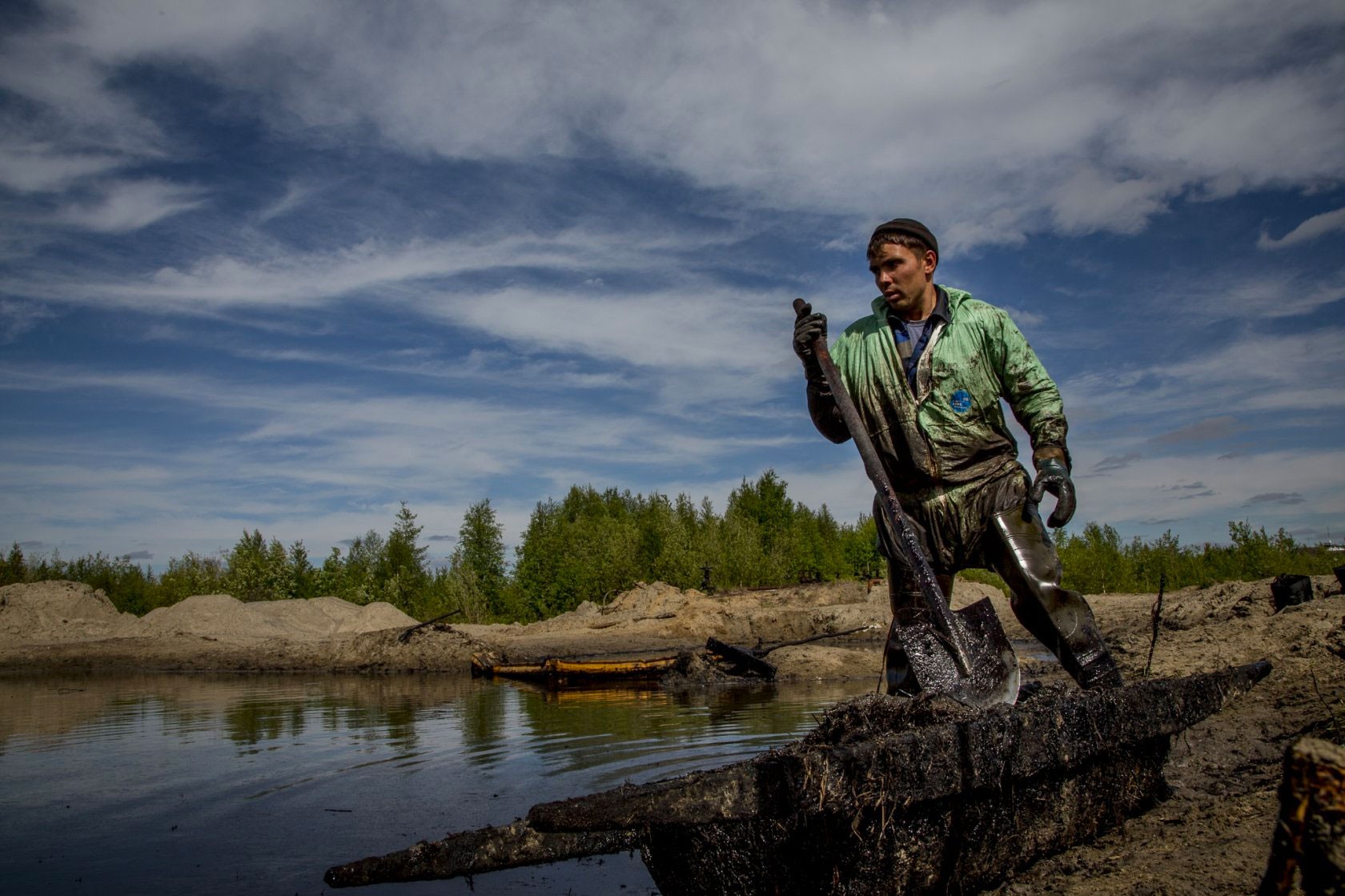 A photo report from Usinsk, its people and its oil

Text and photo by Petr Shelomovsky

The city of Usinsk in the north of the Republic of Komi is famous for history’s largest oil spill on land in 1994. According to unofficial data, between 100-120 thousand tons of fuel spilled into the ground. Although the authorities insisted that it was only half that much. There has been nothing comparable to this “black record” in the last 20 years, but emergency situations on pipelines occur almost every day. 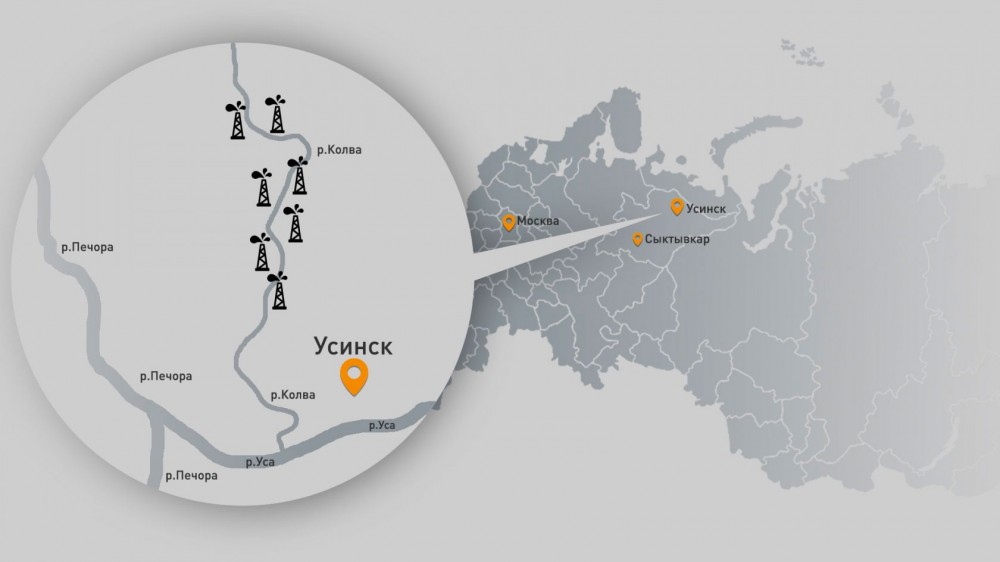 Oil companies have been operating here for more than 40 years and have had a strong impact on the people who live near the water for decades, fished, picked mushrooms and berries: oil often comes into the river Kolva near Usinsk, and then to the rivers Usa and Pechora.

In the summer of 2016, freelance photographer Petr Shelomovsky spent two weeks in Usinsk observing the neighborhoods of the local residents to the oilmen. His pictures and videos have been in personal files for almost a year. In the fall of 2017, he handed the materials to “7x7”. And we realized that nothing has changed a year later: Petr Shelomovsky’s work will be relevant both in a year and two, because oil is spilled every day.

Usinsk is a place where nothing will ever grow. It is a tundra covered with a layer of asphalt oil. And aove all — brand new domes of churches and torches of refineries. It’s kind of an apocalypse, the threshold of hell

If you go to Usinsk by plane, you can see almost the entire 40 thousand inhabitants city before landing: several districts of nine- and five-story buildings, a center with a large area in front of administrative buildings and new buildings with signs of oil companies.

Neither oil derricks, nor torches, nor large fuel tanks are visible. All of them are located slightly away from the city. The road to them stretches north along the Kolva. Along it — several dozen of drilling rigs. Local journalists name this neighborhood “the curse of the Kolva”.

Three large fields in the vicinity of Usinsk — Usinskoye, Vozeyskoye and Kharyaginskoye — were discovered from 1962 to 1971. The city was quickly built, the state invested a lot of money in geological exploration, infrastructure and industry. Local residents recall that deer from local pastures had to be moved to the Nenets Autonomous District. Oilmen quickly became owners of this land.

69-year-old Valery Popov is smoking fish in a small barn, it was caught in the Kolva. He says that it is a rarity to catch good fish now as it is often affected by decease. Valery blames the 1994 accident, after which the fish began to smell like diesel fuel, and the cattle started to get sick.

“There were such fish lakes here! But after the accident the fish instantly disappeared. The nelma was so good, but now you cook it, and it smells of diesel. The currant disappeared. Lots of meadows were spoiled. Horses and cows started to get sick. Berries are small, mushrooms are tasteless. That is because oil constantly flows through the Kolva, and moves under the ice. Only forest and river feeds us. We do not say that there is no need for oil workers. They are needed, but we must preserve nature, forest, water. Nothing should get into the river.”

Once a year, employees of the company Lukoil-Komi release fry into the river. This “ritual” is held with great fanfare: with participation of officials, students or youth leaders of oil companies; journalists of local media sometimes get into the water to make a nice shot, and the staff poses in front of the cameras.

Coordinator of Greenpeace Russia’s Arctic project Yevgeniya Belyakova believes that planting of fry into the Kolva and Usa is meaningless:

“The Kolva River has lost all its fish resources. The concentration of oil products in the caught fish is exceeded. The ecosystem does not die because there are few fry, but because the ecosystem is destroyed, it’s toxic. The fish does not return there. No matter how many fry there is in the poisoned pool, there will not be any sense. Though it looks beautiful.”

The state report on the Komi environmental conditions in 2016 states that there were only 12 oil spills in the republic for 12 months, five hectares of land were polluted. In the reports for the past years, the figures are not much different — 10, 13 spills per year.

At the same time, the Lukoil-Komi company reports to the Center for Dispatching Control of the Fuel and Energy Complex (a governmental body that collects information about the state of emergency) about several hundred gusts of oil pipelines per year, that is, 2–3 daily. Neither environmentalists nor the employees of the Ministry of Industry, Natural Resources, Energy and Transport of Komi could explain such data variance.

“During the trip, I was on the site of an oil spill, which was discovered in April 2016, ” Petr Shelomovsky said. “I saw a pit and a pipe from which oil flows, met oil workers who were sealing this pipe. They knew that it was leaking, cut this pipe, began to drain the remains of oil. Where? Also on the ground. How will they re-cultivate this? They will fill this place with earth, mix it and leave it like that. Because it is not visible from the road.”

Local residents state that oil companies are in no hurry to report all oil spills, and publicists and journalists are kept out of the emergency site. Journalists of “7x7” faced similar situation in October 2016. Correspondents of the online journal Vladimir Prokushev and Maxim Polyakov used a drone to record a large oil spill in 100 kilometers from Usinsk. First, employees of a private security company tried to interfere, and then journalists were detained by the police, who tried to confiscate a quadrocopter. It is possible to estimate the scale of only one accident on the video of “7x7” journalists.

Members of the oldest regional environmental organization “Committee for the Salvation of Pechora” are fighting with oil spills in the north of the Komi. Activists, who are residents of small villages and villages along the Usa, Pechora, Izhma and other rivers, are usually the first to inform the media and the public about new oil spills, they fix the evidence on the video, insist on replacing old pipes of oil pipelines (reason of 95% accidents). But there are not many of them. Most people prefer to do nothing. And Petr Shelomovsky met such people in the vicinity of Usinsk.

“People who think that it’s normal continue to live in the middle of this apocalypse. Here I noticed that local residents were not interested in environmental problems. And this, I believe, is Russia’s main problem.”

I asked people: “What do you want to achieve?”. They want compensation. That’s all. For the ruined house, for the bad water, for the cancer of children. Everything else suits them. They do not seem to have a connection between the cause of cancer of their children and the cancer itself. They think that cancer is kind of a great way to get some money from the budget.”

There is a wonderful woman, a schoolteacher, she takes pupils out hiking, talks about the beauty of her native land. She herself is not local, she came to Usinsk as a student, got married there. I ask: “And where does the husband work?” — “In the oil industry”. People came there, fell in love with the place. But they came there to get oil. So this is a very strange story. Another detail: the mayor of Usinsk asks permission from the press secretary of Lukoil to give me a comment.

What else can you say?

I rode back to Ukhta by train in one compartment with a man who had his drilling business. This business was later taken away. I said to him: “I noticed that people here take everything in sight”. And he answered: “Yes, indeed. If you get a drilling contract, and you most likely get it as a subcontractor, you get it for a kickback. The likelihood that your customer will ask you to clean up after drilling tends to zero. And why should you clean, if your hard workers will dig out the cable themselves, everything will be scrapped. No need to clean”.

There is an organization I respect — Greenpeace, it claims that it stands for environment, but outside politics. I realized that this does not work. They manage to achieve something, but any of our environmental problems will always rest against politics, corruption, and Mother Russia. And for me, Mother Russia — it is when they drink and steal. This is what happens in Usinsk every step of the way. And oil spills are a direct consequence of the fact that someone has stolen something. And when a person does not drink, he steals even more, he simply has more free time.