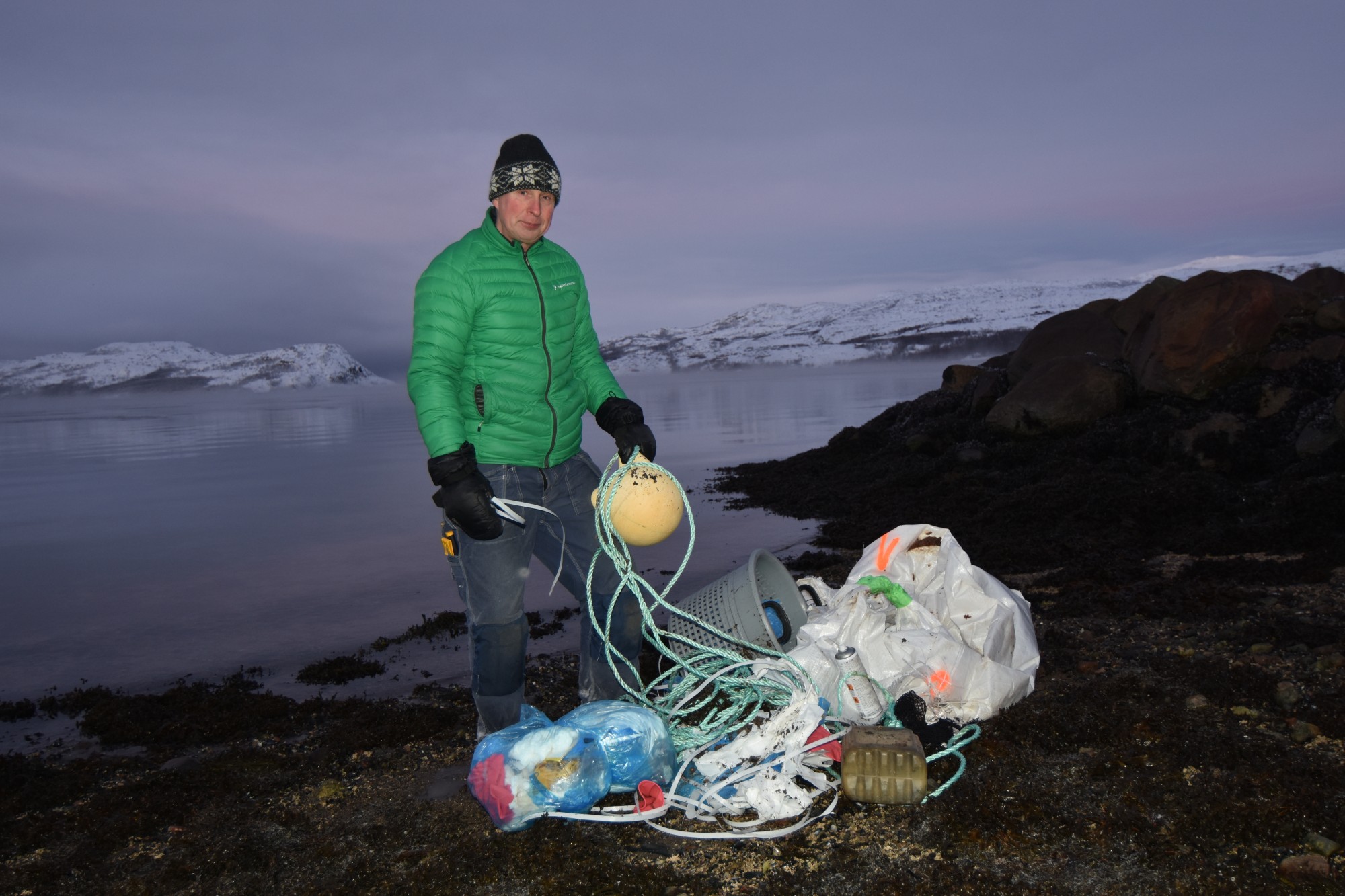 Plastic is not fantastic:

The amount of microplastics found in blue mussels on Norway’s Barents Sea coast near the border to Russia is more than double of what is measured in the inner Oslo Fjord. Oddbjørn Jerijærvi, collector of samples, says the fishing industry is to blame for 90 percent of all plastic waste he finds in the Varanger Fjord area.
Read in Russian | Читать по-русски

«More and more plastic waste litters the coastline here in the Varanger Fjord,» says Oddbjørn Jerijærvi, a local that for years has assisted the Norwegian Institute for Water Research (NIVA) in collecting samples in the area. «Eastern Finnmark, on the coast of the Barents Sea has always proved to be the cleanest of all areas of testing in the North Atlantic. But not so any more,» Jerijærvi explains while showing the Barents Observer how much waste there are.

Discarded fishing equipment, nets, styrofoam boxes, plastic bags filled with garbage, plastic straps, plastic oilcans and you name it. Everything thrown at sea is brought to shore by sea waves.

«Many tons of plastics strewn on the shores is not how we want to see the otherwise beautiful Varanger coast. The sight is one thing,» Oddbjørn Jerijærvi says. He is, though, more worried about the consequences for marine- and wildlife in the area. «Plastics cause death to whales and seabirds who eat it or use it for nesting material. But also this could prove to be minor to the problem we face when the plastic is exposed to our stormy weather towards the cliffs on the coastline,» Jerijærvi tells with a serious face. «Slowly but surely the plastics get crushed to smaller and smaller particles. When the oil that is in all plastics oxidizes because of sun and water, the microplastics will slowly sink towards the seabed.»

The NIVA report (pdf), published by the Norwegian Environment Agency on Friday, reveals a grim reality of microplastics found in blue mussels on the Barents Sea coast. No other of the 13 sampling locations in Norway show higher amount than Skallneset, near Vardø. The location is close to the maritime border with Russia at 70° North. Here, an average of 4,3 particles of microplastics were discovered in each mussels. That is much higher than any of the other locations and more than two times what was found in the harbor of Norway’s capital Oslo.  The overall average plastic load was 1.84 particles per individual mussels.

One of the report’s authors is Amy Lusher, Research Scientist with NIVA. She says to the Barents Observer that more long term studies would be beneficial to learn more.

«Repeated, long term sampling would be beneficial. We recommended in the report that standardized monitoring, such as the method presented, should be used and experienced researchers familiar with microplastics as a pollution should conduct such tests. It is our intention to continue sampling and testing mussels around the coast and at additional locations,» Amy Lusher says.

Most of the particles found were blue in colour (39 %) and the most common polymers were semi-synthetic fibres composed of chemically altered cellulose. Microplastics are particles less than 5 mm in diameter.

She tells that it’s difficult to explain the high amount found at Skallneset, an area remote from any large urban type activity and close to Varangerhalvøya National Park. The area, however, is very exposed to the Barents Sea.

«At the moment we do not know exactly why the mussels in Skallneset have such high values but we have hypothesized a number of potential reasons. Based on the results there were considerable differences in the numbers of microplastics per individual as well as per gram, between sites and their assigned categories. It is very likely that environmental variables influence the distribution of microplastics within the water column. These variables probably affect the different sample sites along the Norwegian coast. With reference to Skallneset we highlighted that ocean currents, tidal amplitude could influence the number of microplastics found,» Lusher explains.

Other reasons for the high amount could be related to atmospheric deposition from airborne microplastics and transport inflow from the North Atlantic to the Barents Sea.

«With repeated sampling it may be possible to see if the value changes during different times of year, tidal ranges etc.» Amy Lusher concludes.

Last year, the European Food Safety Authority called for a full risk assessment on the issue. One particular concern is over high concentrations of pollutants like polychlorinated biphenyls (PCS) and polycyclic aromatic hydrocarbons (PHAs) that can accumulate in microplastics. The European Union’s food watchdog also pointed at oysters and mussels, suggesting they are «the digestive tract» so humans eating them get some exposure of micro- and nanoplastics.

Microplastics is flagged as a potential future food safety issue.

Camilla Fossum Pettersen with the Environmental Agency writes in an e-mail to the Barents Observer the Agency has allocated funding for the 2018-budget to investigate methods to obtain a baseline for how much microplastics there are in different types of environment.

«NIVA has recommended further steps for environmental surveys, and we will consider the advises on how to proceed,» Fossum Pettersen tells.

Oddbjørn Jerijærvi has a clear idea on why the amount of microplastics at Skallneset surpasses the other locations. «The explanation is the amount of plastics at sea combined with high waves crushing the various plastic garbage to the rocks.»

He points the finger of blame at the fisheries which he says «maybe account for as much as 90 percent» of the plastics. Jerijærvi is deeply worried about the future.

«Additional to the microplastics itself, unwanted pollutants like heavy metals and dioxins tens to the particles. The idyll of a clean Barents Sea coast seems like something we have to forget. Ten years ago, we had to stop eating seagull eggs due to critical high levels of dioxin. This year, we got a ban on large-size halibut as human food. Now, mussels are in danger of being added to the list,» Oddbjørn Jerijærvi says with a frustrated voice. He adds «It’s high time to act.»

He lists a number of measures that should be done. «Introduce a plastic bag fee, or actually impose a fee on all usage of plastic high enough to cover the costs of collecting and recycling plastics.» Oddbjørn also sees the need to confront the fleet of fishing vessels, both the larger Russian trawlers and the local Norwegian fishing boats in the Varanger Fjord and along the coast of Finnmark. «The local fishermen names the Varanger Fjord to be the ‘Big ØFAS’ [abbreviation for the regional municipal waste management company]. Larger fishing vessels, especially from Russia have empty trash cans when they make port calls after weeks or even months at sea.»

«There has to come waste containers in all harbors free of charge to use.»