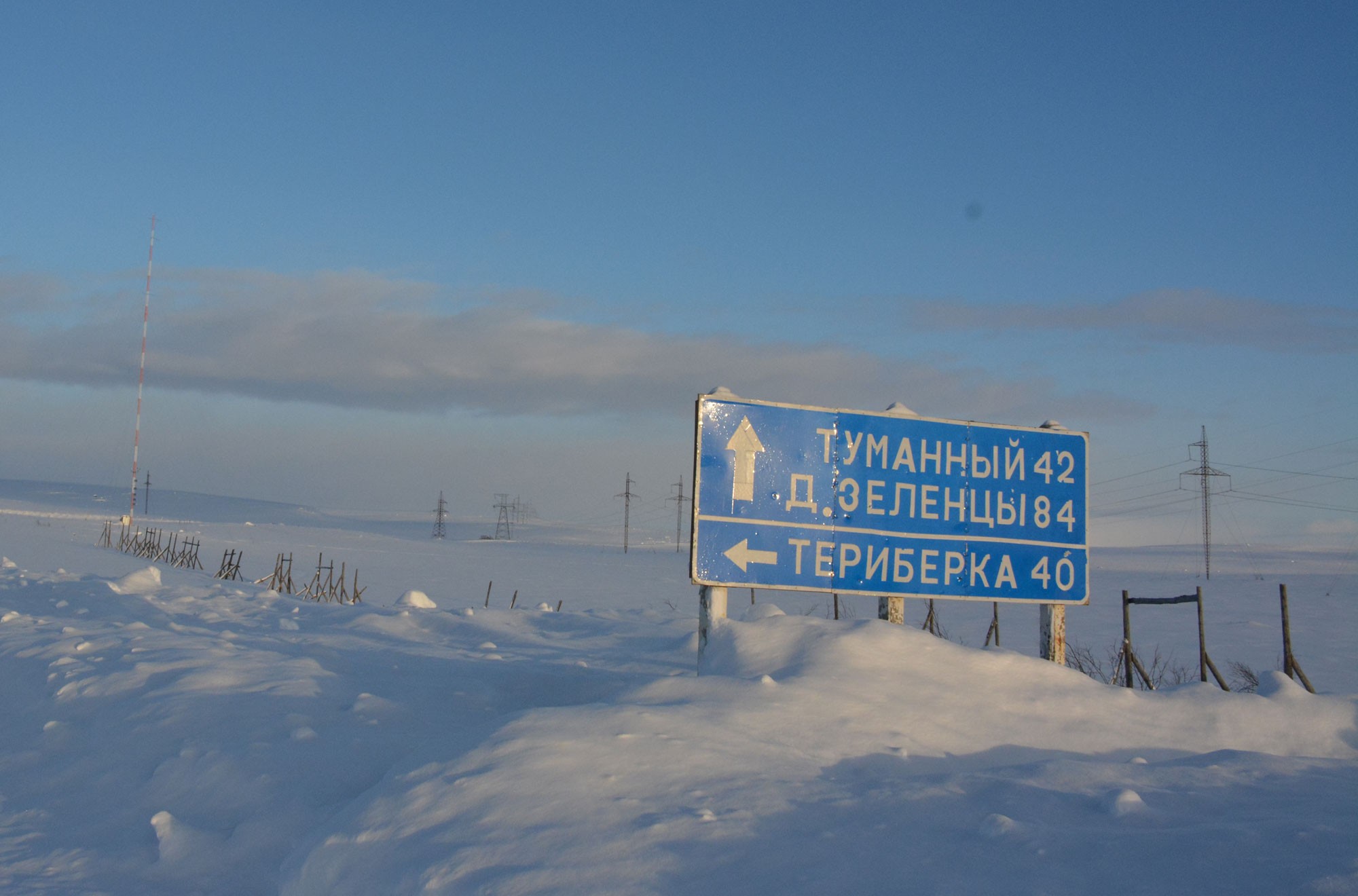 It will be built by Italians and produce enough electricity for a quarter of the Murmansk population. But the Russian Arctic region might not really need it.
Read in Russian | Читать по-русски

We move across snowy hills and open landscapes. The road to Teriberka is long and windy and you will easily get stuck if the weather turns bad.

These Arctic lands and climatic conditions are harsh. The cold winds that come in from the Barents Sea have formed the landscapes and the people who live here.

This is the northern coast of Russia’s Kola Peninsula, and locals are well familiar with rough rules of nature.

Driver Maksim is not afraid of traversing the road in his 1993-model Ford Transit. Despite dark clouds on the horizon we move quickly on the 130 km long route between Murmansk and Teriberka. In the winter of 2017, dozens of cars were locked up in snow on this road as plow trucks were unable to handle the loads of white cloudburst. This year is better, Maksim explains. Governor Marina Kovtun has actively engaged in the issue after massive public criticism.

Teriberka has become a priority spot for regional authorities. Maksim himself works in the tourism industry, which is now flourishing in the small coastal town of about 750 people. In wintertime, people are coming to see the northern lights and sense the Arctic cold. In summer, they want to go out to see the whales and fish at sea, he says. Many are Chinese.

Like most other locals in Teriberka, Maksim does not know what the construction machines along the road are up to. But soon, they will find out. The answer is blowing in the wind.

Here, about 60 kilometers south of Teriberka is the site for Russia’s first major wind park in the Arctic. Already in year 2021, up to hundred turbines will be lined up along this road, swirl the air and generate clean energy.

The project is developed by Italian company Enel and will have a 201 MW power capacity. Development is in the process. As we drove past the site in early March, there were construction machines on site doing what appeared to be the first project operations. In addition, a brand new transforming sub-station has already been built on the outskirts of Murmansk in the direction of Teriberka. It is connected with powerful existing transmission lines leading to the site of the wind park.

Russia’s first ever project of the kind

«We we have strong winds, but no experience from this kind of industry», says Vadim Glukhikh. He is leader of the Murmansk regional Agency of Energy Efficiency and closely familiar with the project. «It will be like a school,» he explains and says experiences from the project can serve as example for other future Arctic wind projects.

It will require pretty much space

According to Glukhikh, project development is in the process and only a few last details regarding the lease of the land remain to be solved.

«It will require pretty much space,» he makes clear.

It is the Italians that will build the turbine park. In June 2017, Enel Russia company General Director Carlo Palasciano Villamagna announced that his company had won a tender on the construction of two wind projects in Russia, one in Murmansk and another in the southern Russian city of Azov. The tender was organised by the Russian government and had a total cost frame €405 million. It was part of a government bid to develop more renewable energy.

It is the Italian company’s first major engagement in Russia.

Wind power development in the Kola Peninsula is not a new idea. For several years, the Dutch company Windlife Energy and its Russian subsidiary Windlife Arctic Power lobbied for the development of a similar project on the very same spot that Enel now has started construction.

Windlife Energy launched its Murmansk wind power plans already in 2001 and in 2008 a Murmansk governmental commission approved a company MOU on the project.

The company soon erected a 80 meter high wind measurement mast on site. Data showed an average wind speed of as much as 8,5 m/s, among the best results in all of Europe. The data from Windlife’s installation became crucial for the future of the project.

The wind project will produce up to 739 GWh per year. The turbines are to be delivered by Siemens Gamesa. A lion’s share is to be built in Russia.

In a comment from the company’s headquarters in Rome, a press spokesman confirms that the project is «expected to be built by the end of 2021». The plan to connect the power plant to the grid has already been agreed with the local transmission system operator, the spokesman makes clear to the Barents Observer.

According to Enel, the company has established «аn open and cooperative relationship with local stakeholders in Murmansk.»

«In fact, since the very start of our business development activities, our new project registered a positive reaction among the region’s local government and civil society as they were proud to be selected as the future home of Russia’s energy sector, on grounds of Murmansk’s wealth of wind resources,» the statement from the company reads.

Among those regional civil society stakeholders is Bellona, the environmental foundation, which for more than two decades has worked closely with energy developments in the north Russian region.

Yuri Sergeev is Consultant for Bellona. He argues that the Murmansk wind project is developed primarily because of the federal government’s desire to show off its focus on alternative energy.

«Like most big renewable projects in Russia, this is not about making money, but more about prestige,» he says to the Barents Observer.

The current Russian Energy Strategy includes an ambition to produce 2,5 percent of the country’s total electricity generation and consumption from renewable sources by year 2024. The Murmansk wind project is part of that picture.

This is not about making money, it is first of all about prestige

According to Sergeev, there are no consumers in the region for the energy that will be produced by the wind plant.

«In this region, there is from before very much energy production, the Kola Nuclear Power Plant, 17 hydro power plants and two heat power plants. We have more energy than we need. We are selling power, but still have a lot.»

The environmental organisation has been lobbying for alternative energy solutions in the region for years. But it has not been easy, Sergeev explains, simply because there already is such a big surplus.

The existing generating facilities in Murmansk Oblast today have a total production capacity of 3633 MW, of which 48 percent is nuclear power and 44 percent hydropower. About 21 percent of the generated power is transmitted to neighbouring Karelia, while five percent is exported to the Nordic marked.

«In the principle, we have sufficient energy and there is no urgent need in new generation,» he says to the Barents Observer.

«But the additional power can be transmitted and sold to more southern regions, to all of Russia, and it can also be transmitted across the border to the Nordic energy marked,» he argues, and proposes that cross-border energy should be subject for more bilateral talks.

The Murmansk wind project represents something new and unprecedented not only in the region, but for all of Russia. Never before has such a major wind power initiative been built in the country. And this is the Arctic.

It will not be easy, Yuri Sergeev makes clear.

«It is good for Murmansk region that there will be such a project,  it will give new skills sets and unique experiences for our region, but I am afraid that it will be a lot of challenges and problems with it,» he says.

«I hope they know what they are doing, but clearly the weather condition will be a great challenge.»

The Bellona expert believes ice conditions will pose a serious technical challenge. He underlines that the developers carefully must choose the surface materials of the turbine blades in order to prevent icing. Also the metal core parts of the installation must be able to withstand big pressure as the very high wind speed blades could deform the blades.

This has not been done before in Russia, Sergeev says.

«You, know, this is a country of nuclear power and conventional energy production».

This story is part of an article series about wind power in the Arctic. With support from the Clean Energy Wire