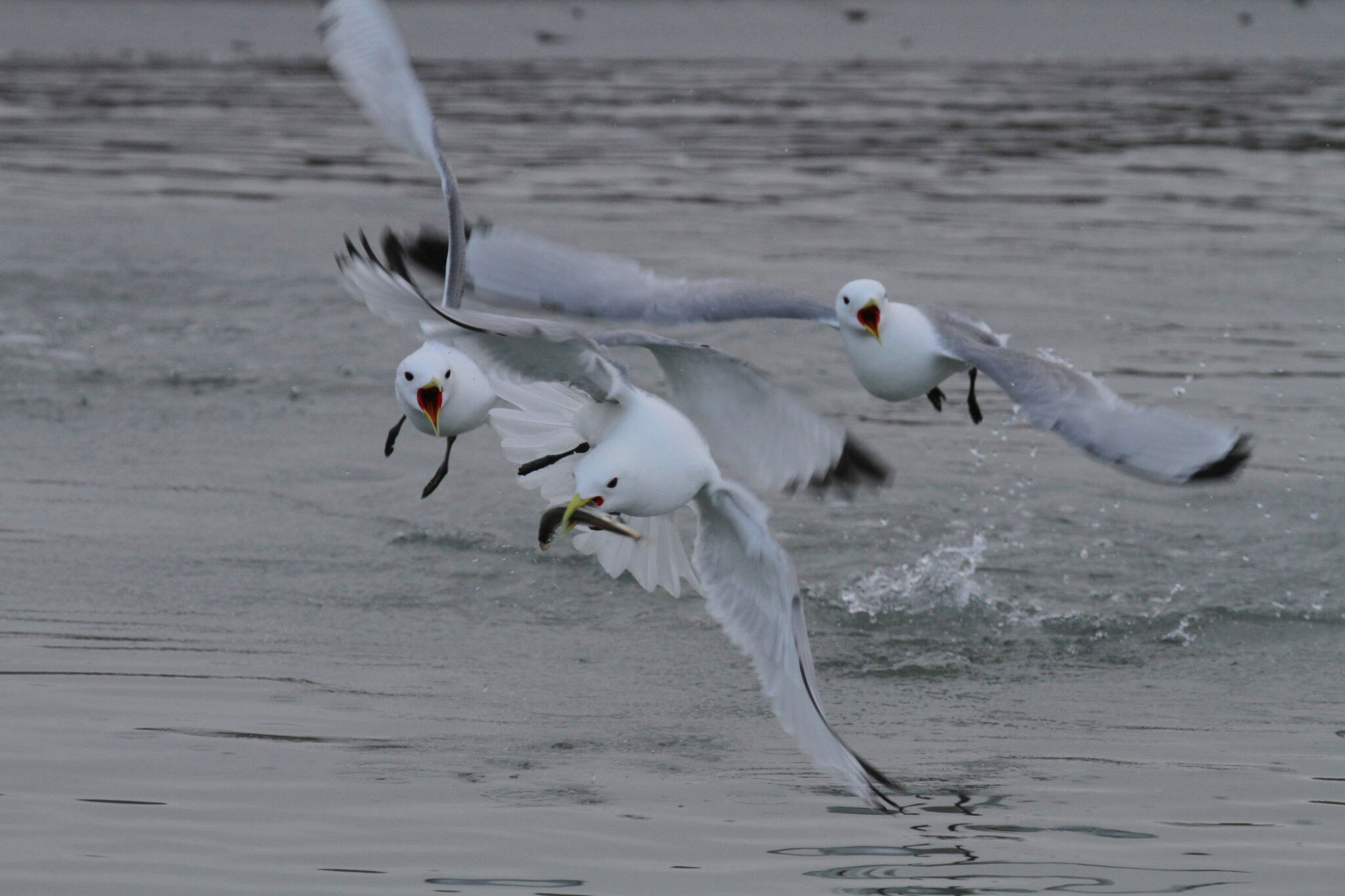 Climate warming is rapidly altering the physical marine environment in fjords on the west coast of Svalbard towards a more temperate state. Reductions in sea ice cover and increased ocean temperatures are evident, resulting in changes of ice-associated and pelagic ecosystems.
Read in Russian | Читать по-русскиRead in Chinese | 阅读中文版

Documenting climate-related changes in a marine ecosystem is detective work. Oceans are in a constant state of change due to weather, currents, tides, and seasonality. Consequently, samples collected from the same spot even just a few minutes apart can vary considerably. Similar to judges in a court, scientists need reliable evidence to ascertain that differences among samples taken over time are part of a long-term trend rather than shorter-term natural variability. Acquiring such evidence requires thoughtful long-term sampling campaigns and thorough statistical analysis of collected data. During the last years, researchers working in Kongsfjorden have published long-term ecological and physical data series. These time series range from diet samples collected from seabirds to direct measurements of temperature, sea ice and plankton abundances. Shifts in the ecosystem reflecting physical changes are now apparent and sometimes surprising.

Phytoplankton investigations in Kongsfjorden date back to the early 1970s with systematic monitoring each summer since 2009. The time series indicates three different spring bloom scenarios. Until the early 2000s, Kongsfjorden often had a long-lasting ice cover, and the phytoplankton bloom was in May. The recent decrease in sea ice cover has resulted in an earlier bloom in April. Both these bloom scenarios are characterised by the dominance of diatoms due to weak thermal gradients allowing resting spores to be mixed up into the water column during winter. The last scenario, encountered during the warmest years in the time series, is associated with a surface inflow of Atlantic Water during winter, preventing deep winter mixing and ice formation. This scenario results in a delayed and diminished bloom dominated by colonies of Phaeocystis pouchetti. Such changes in the timing, magnitude, and composition of the spring bloom can have ripple effects on the entire marine food web.

Zooplankton has been monitored each summer in Kongsfjorden since 1996. The time series shows an increase in the contribution of the Atlantic copepod Calanus finmarchicus, possibly due to warming and loss of sea ice in Kongsfjorden. Surprisingly, the abundance of its Arctic cousin C. glacialis has not declined in Kongsfjorden nor in Isfjorden further south. Earlier onset of the spring bloom, combined with warmer temperatures does not appear to displace C. glacialis but rather to improve its breeding efficiency, shorten its life cycle and reduce its body size to resemble the smaller C. finmarchicus. The transfer of energy, from primary producers through Calanus to higher predators, may then become more efficient due to changes in generation length and population turnover rate that accompany the changes in body size. For size-selective predators, however, smaller copepods will be harder to catch than larger ones, and as the efforts increase, the rewards decrease.

The marine ecosystems on the west coast of Svalbard are influenced by the northwards flowing West Spitsbergen Current, a branch of the warm North Atlantic Current, making the fjords respond to climate change earlier than fjords situated elsewhere in the Arctic. The “Atlantification” signal is penetrating deeper into the fjords along the west coast than previously because of increased temperature in the West Spitsbergen Current. This change influences the base of food webs, with phytoplankton converting energy from the sun during the spring bloom into sugars and lipids that are grazed by herbivorous zooplankton such as the Calanus copepods. Atlantic predators such as Atlantic cod may also change the ecosystem by increased predation pressure on smaller fishes such as polar cod and lower trophic levels.

Diet samples collected from black-legged kittiwakes – surface-feeding seabirds – indicate that the pelagic ecosystem in Kongsfjorden abruptly changed in 2007, becoming more Atlantic. Polar cod, a High Arctic fish, and the pelagic amphipod Themisto libellula, an Arctic crustacean, dominated the kittiwakes’ diet until 2006. Following a large inflow of Atlantic water to the fjord during the winter of 2006, capelin, a pelagic fish adapted to warmer North Atlantic waters, became an important part of the birds’ diet. After the change in 2007, the contribution of polar cod in kittiwake diet did not return to the previous levels. Instead, the diet contained a more varied range of species including Atlantic herring, which appeared in the diet samples in 2012 coinciding with another Atlantic inflow event. Further, there was more polar cod in kittiwake diet during years with more sea ice, and conversely, more Atlantic fishes during years with less sea ice and higher water temperatures. This indicates that increasing ocean temperatures and decreasing sea ice concentration might indeed have caused the increased occurrences of Atlantic fishes and crustaceans in kittiwake diet samples. The change in diet has not affected the breeding success of kittiwakes in Kongsfjorden, and the population trend has been slightly positive since 2007.

Ecosystem changes have also occurred in the nearshore zone at the seafloor. A 30-year photographic time series of rocky bottom subtidal benthic communities shows an increase in macroalgal cover from the mid-1990s in Kongsfjorden, and in Smeerenburgfjorden further north. Given that algae provide new habitat, several benthic invertebrates also became more abundant, while others declined. These shifts in the benthic community were associated with climatic changes, specifically ice decline and warming water, reflecting increased prominence of Atlantic water conditions. However, the species structure of the community of muddy bottom-dwellers has not responded consistently to warming; rather, we observe changes over time that could be related to variability in other physical drivers.

The long-term ecological research from Kongsfjorden has been used to investigate how the changing environmental conditions are altering the ability of the marine food web to absorb, recover and adapt to the Atlantification. An important aspect of this work has focused on ecological resilience, which is the ability of the Kongsfjorden marine food web to continue to withstand further changes. The results show that the Atlantification event in 2006 resulted in a significant loss of ecological resilience, with the system becoming more susceptible to a loss of biodiversity. However, since 2013, changes in how species feed and interact with each other show an improvement in ecological resilience. The secondary productivity has also increased both in Kongsfjorden and in coastal areas of Svalbard. While further observations are required, this provides preliminary evidence of a new emergent marine food web adapting to climate change.

The changes we observe in Svalbard are happening fast: the fauna in the west coast fjords is now less characteristic of the High Arctic, but more and more resembles the ecosystems along the Norwegian coast, with food webs partly composed of Atlantic species.

This analogy indicates that Arctic species remaining in the ecosystem may gradually decline in abundance and eventually disappear altogether. The change, however, does not appear to have reduced the productivity of the system but has rather led to increasing secondary productivity. Further, some Arctic species such as C. glacialis appear to be able to adjust to the new regime by adopting life history strategies similar to those of Atlantic species, thus making the ecosystems resilient to the change. The jury is still waiting for more evidence on the outcome of competitive interactions between the Atlantic newcomers and the Arctic residents before proclaiming the losers and winners of the grand scale climate experiment.