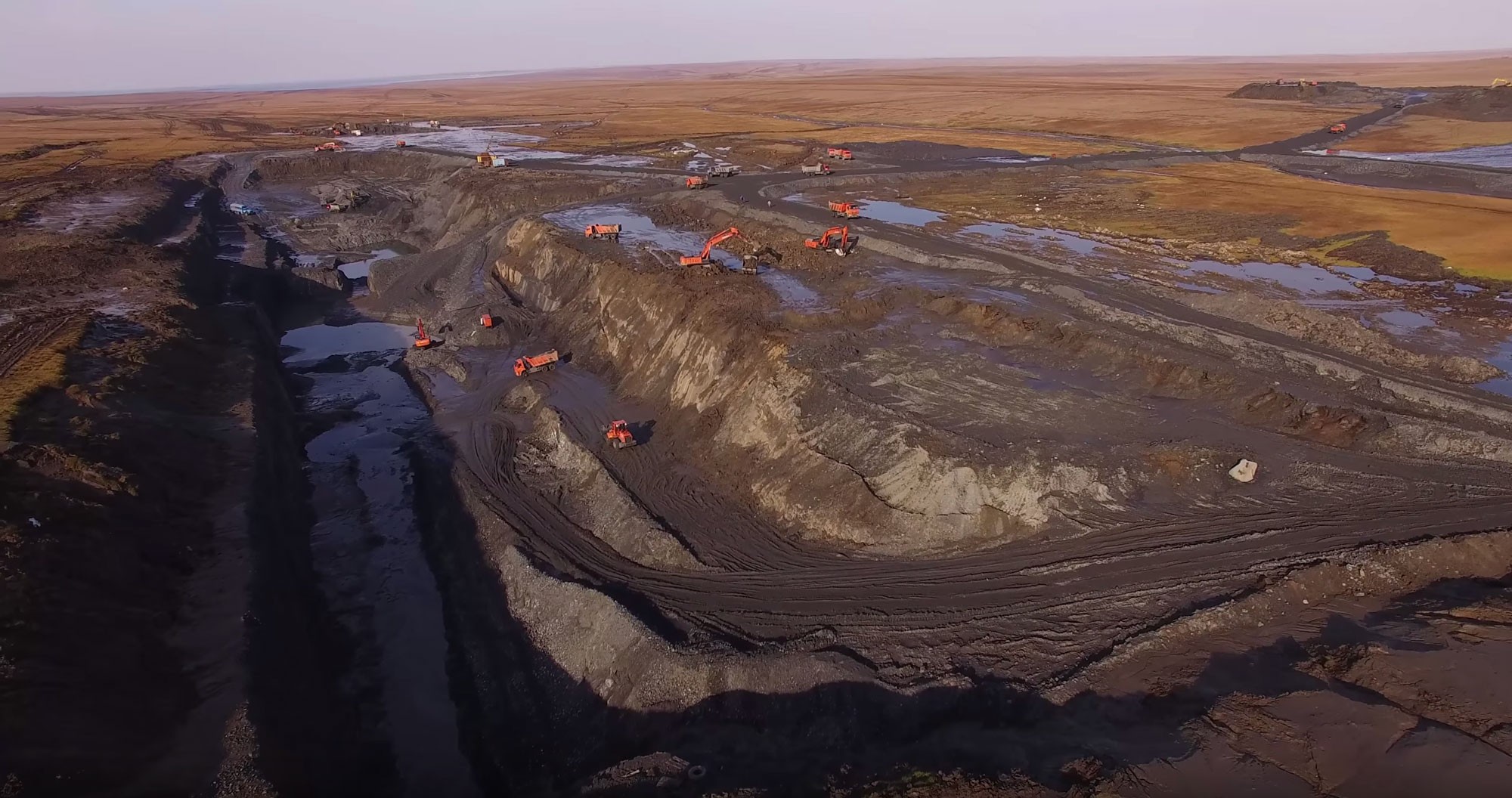 Company Vostok Coal has been been fined several hundred million rubles for illegal mining in the Taymyr Peninsula, but still gets government’s approval for expansion into a local national park.
Read in Russian | Читать по-русски

On the northernmost tip of the Russian mainland is unfolding a large-scale and highly controversial extractive industry.

Under the ground of great peninsula Taymyr lie large resources of high-quality coal. And a Russian extracting company intends to bring to the surface several hundred millions tons of it.

It is called anthracite, a hard kind of coal that contains extraordinary levels of energy.

Vostok Coal, the company controlled by businessmen Dmitry Bosov and Aleksandr Isaev, gained its first licenses in Taymyr in year 2014 and has since strengthened its position in the area with a number of additional extraction licenses.

The company now controls more than 50 production licenses in the peninsula, Vadim Bugaev, the general director of subsidiary company Arctic Mining Company told the press in 2016.

According to Bugaev, this is the richest area for anthracite in the world. The region is referred to as the Taybass and might hold several hundred billion tons of coal resources, he argued in a presentation.

It is the Arctic Mining Company that is in charge of operations. Annual production targets were originally set to 30 million tons, but are now downscaled to 20 million tons. All of its is to be exported through the Northern Sea Route (NSR), the Russian Arctic seaway that is connected with both Asia and Europe.

It will significantly boost shipments on the Arctic route and contribute to Russian President Putin’a ambitious goal to bring goods on the NSR to an annual 80 million tons by 2024.

Open pit on the tundra

The northwestern parts of the Taymyr Peninsula are covered by vulnerable tundra land and Vostok Coal intends to extract in the easiest and cheapest way possible: to dig big holes and take out the black carbon-rich material.

Operations are well underway. The company already in 2016 revealed footage that showed big machinery engage in digging in the area. A working village with housing for employees has been built on site with adjacent roads and infrastructure.

At the same time, a large and fancy office building has been erected in Dikson, the small town located on the coast of the Kara Sea, not far from the extraction site.

The coal is to be shipped out through two new port terminals. The Chaika and the Severny, both to be located slightly south of Dikson, will have an accumulated capacity to handle up to 20 million tons per year.

Also the building of a railway connection between the ports the mining area is on the table.

It is among the remotest areas on the planet. Infrastructure is sparse or non-existent. Access to the sites by observers, researchers, let alone independent journalists, is almost impossible.

However, far from everything has proceeded smoothly for Vostok Coal and its Arctic Mining Company.

In 2017, the company was sued after inspectors from the state nature protection agency Rosprirodnadzor managed to make it into the production area and discovered grave environmental violations.

According to the inspectors, the company has inflicted serious damage to local environment and did not have the permissions needed.

The inspectors reportedly found about 70,000 tons of extracted coal stored on site. In addition, more than 180,000 tons were exported in a complex logistical operation in winter of 2017.

The company denies any wrongdoing. The extracted coal is part of geological testing of the area, it argues.

Following the inspection, the company tried to sue the representatives of the environmental agency for illegal entry to the production area, newspaper Kommersant reported. The court rejected the case.

The mining in the remote Taymyr Peninsula has also attracted the attention of the Federal Security Service (FSB).

In April this year, the security service joined the environmental protection agency and filed a suit against the Arctic coal miners. According to the FSB, the company not only engaged in illegal mining but also unlawfully exported the coal, newspaper RBC reported.

The state nature protection agency originally demanded 2 billion rubles in fines for the coal miners. In June this year, the Moscow arbitrary court ultimately ruled that the company must pay 600 million rubles.

The mining company immediately announced that it would appeal the verdict.

The controversial developments in Taymyr also has a link to Scandinavia. It was the Nordic Bulk Carriers, a Danish shipping company, that delivered the shipments of coal from Dikson to Europe in 2017.

The operation was highly difficult, and the Danish ship reportedly had a minor collision with nuclear icebreaker «Vaigach» during the voyage. None of the ships got serious damages and both were able to independently complete their operations, Morvesti reported.

The incident happed on the 14th of March 2017, the newspaper informs.

In a comment to the Barents Observer, the Danish company makes clear that the court proceedings against the Vostok Coal will not affect cooperation between the partners.

«We are aware of the rumors around Vostokcoal but they do not concern our company or our vessels,» says Managing Director Mads Boye Petersen.

«We are in regular contact with Vostokcoal with regards to shipments both in 2019 and beyond,» he says.

In 2017, Rosatom signed a cooperation agreement with Vostok Coal that  provides icebreaker assistance to the shipments from Dikson.

In a video presentation available on the website of Vostok Coal, high-ranking Rosatom representative Vyacheslav Ruksha makes clear that the Taybass coal resources ultimately will constitute a major share of the goods shipped along the Northern Sea Route.

Despite the controversial character of the mining operations and the violations conducted by the Vostok Coal, the company has firm support from the highest political level.

The federal support for Dmitry Bosov and the Vostok Coal comes on the backdrop of the huge plans for the development of the Northern Sea Route. President Vladimir Putin in his so-called May Decrees from 2018 underlines that shipments on the Arctic route should increase to 80 million tons of goods by the end of his presidential term in 2024.

That is a highly ambitious task and federal authorities are now struggling to identify projects that could help meet Putin’s target. The coal from Taymyr might be necessary if the goods volumes are to get close to the president’s 80 million tons.

The two projected seaports on the Kara Sea coast, the Chaika and the Severny, provide the necessary infrastructure for the export of coal from the nearby mines.

But the problem for Vostok Coal is that the terminals are located within areas strictly regulated by environmental legislation.

The federal Ministry of Natural Resources long rejected the company’s construction plans in the area because they were located too close to the borders of a local natural park. The projected seaports are located only few hundred meters from the protected Bay of Meduza, a local part of the large Big Arctic National Park, one of Russia’s biggest protected areas.

In a report from 2016, the Ministry informs that it finds it impossible to approve the project. In the area is also located the international Willem Barentsz Biological Station, a research facility built in 1995 with support from Dutch authorities, the ministry says.

«We are not against the development of Dikson, but we and our federal managers consider that the development of the town [Dikson] must not be conducted in violation of the federal laws and regulations and with damage of protected nature territories,» the statement from researchers at the ministry reads.

However, despite the warnings from the environmental authorities, the Vostok Coal is now proceeding with its grand plans, including the building of the two port terminals.

The federal government is reported to be about to change the borders of the Big Arctic National Park, consequently allowing Vostok Coal to go ahead with its construction works.

According to newspaper RBC, the Maduza Bay will no longer be part of the national park.

Dmitry Bosov and his Vostok Coal is ready to significantly change the vulnerable tundra land of the Taymyr. By 2024, the powerful businessman intends to have a fleet of ships shuttling to and from the icy ports on the coast of the peninsula.

It will be boost for Northern Sea Route shipping. And a blow to Arctic environment.