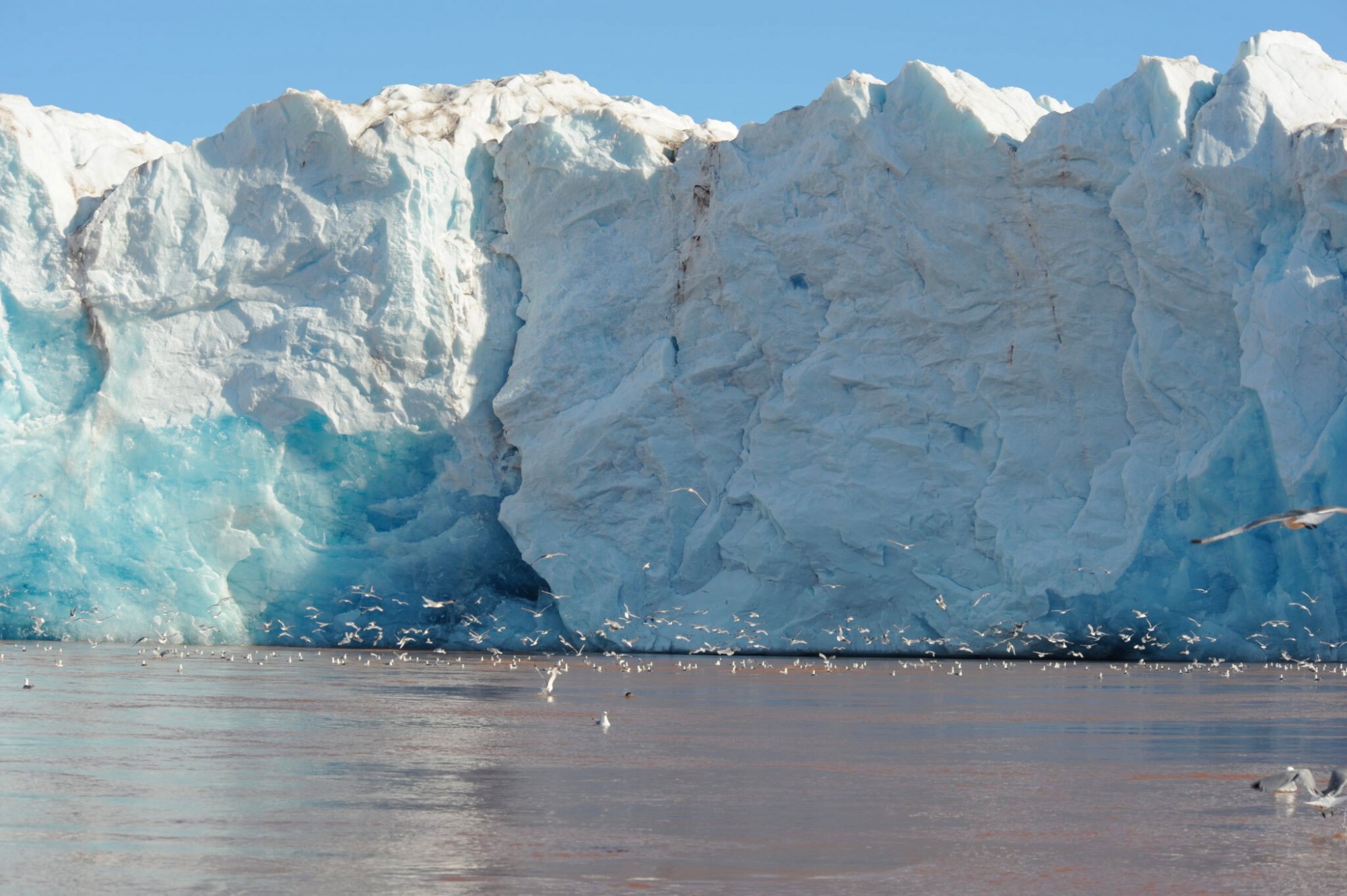 Glacier fronts along Svalbard’s coast are dangerous places. Huge blocks of ice detach and crash into the ocean below, making data collection all but impossible. Now, researchers have found a solution: attaching sensors to ringed seals that dare to go where humans cannot. Seals make brave research assistants!

In 2012, researchers from the Norwegian Polar Institute attached biotelemetry devices to ringed seals (Pusa hispida) in Kongsfjorden, on the west coast of Spitsbergen. The devices collected a vast array of information about the seals’ behaviour, including their location, time spent in and out of the water, and dive information. In addition, the devices measured the temperature and salinity of the water masses through which the seals swam. Six years on, this exciting dataset is still providing valuable new insights into the seals’ behaviour and the ocean properties in areas that have previously been difficult to access.

Kittiwakes, fulmars and ringed seals are often seen feeding at the terminus of Kronebreen glacier. Huge blocks of ice frequently detach from the glacier and crash into the water below. Scientists must keep a safe distance, but ringed seals are a little more bold. Photo: Geir Wing Gabrielsen / Norwegian Polar Institute

Kongsfjorden is a large Arctic fjord on the northwest coast of Spitsbergen, the main island in the Svalbard archipelago. Several large glaciers terminate in the ocean in Kongsfjorden, the largest and deepest of which is the shared Kronebreen–Kongsvegen glacier terminus. The terminus is around 3.5 km wide and extends up to 90 m below the ocean surface to the seafloor below.

A common feature at the terminus of Kronebreen is muddy-red plumes of sediment that emerge immediately in front of the glacier. The plumes are formed by glacial meltwater flowing underneath the glacier, eroding the iron-rich Old Red Sandstone beneath the glacier, and emerging into the ocean tens of metres below the surface.

When the meltwater emerges, it is cold, fresh and buoyant compared to the salty, more dense water in the surrounding ocean. The plume, therefore, rises rapidly, hugging the glacier front, until it reaches the surface.

Why are plumes important?

Plumes are a common phenomenon at ocean-terminating glaciers around Svalbard and elsewhere in the Arctic, and have recently attracted the attention of researchers from a number of different disciplines. For glaciologists, plumes have an important effect on the glacier terminus.

The rapidly rising water draws in the surrounding warmer ocean water toward the front of the glacier, dramatically increasing the submarine melt rate and cutting deep notches into the ice.

Oceanographers are interested in the large volumes of deep water that plumes can carry up to the surface, driving complex circulation patterns and mixing within the fjord. Biologists have observed that seabirds, such as black-legged kittiwakes (Rissa tridactyla) and northern fulmars (Fulmarus glacialis), appear to use the area where the plume reaches the ocean surface as an important feeding ground.

But, so far, what goes on below the ocean surface has been difficult for scientists from all disciplines to observe. Analysis of the temperature and salinity data collected by the ringed seals in Kongsfjorden has now opened up a new window into this hidden world.

What data did the seals collect?

Previous research has shown that ringed seals, and other marine mammals such as white whales (Delphinapterus leucas), spend a lot of time foraging close to glacier termini. But the temperature and salinity profiles collected in 2012 contained a new and interesting feature which shed light on exactly what was attracting animals to the glaciers. In amongst the many typical oceanographic profiles were profiles containing large “spikes” of water with low temperature and low salinity, often more than forty metres below the ocean surface. These “spikes” are a sign of instability in the water column due to the low salinity water in the “spike” being less dense than the saltier water above.

This suggested that the water sampled in the “spikes” must be moving upwards through the water column, thus providing the first evidence that the seals had entered the plumes.

The second indication came from the location data. Whereas previous devices relied on the Argos satellite system, with an accuracy of less than 150 m, the instruments used on the seals in 2012 included GPS devices, allowing the seals’ dives to be located within a few metres. This permitted a more detailed analysis of the seals’ dive locations close to the terminus. Using these dive locations with a clustering algorithm, which can identify where and when the seals were diving in the same location, we found that the seals were diving in specific locations along the glacier terminus. These locations closely matched known locations of subglacial discharge.

What can we learn from the data?

Analysis of the temperature and salinity properties in the “spikes” showed that the seals collected data consistent with concentrations of 27% subglacial discharge at sixty metres beneath the ocean surface. Previous studies found it very difficult to collect samples from deeper than 20 metres within the plumes due to the vigorous upwelling, and the highest concentrations of subglacial discharge were between 2 and 10%. This new technique will help us to compare modelling studies of plumes to the real world and improve estimates of melting and upwelling driven by the plume.

The longtime series of location data show that the seals moved quickly between plumes in different locations at the glacier terminus and that peaks in meltwater runoff from the glacier coincided with periods during which the seals clustered closely together.

This demonstrates that the plumes play an important role in the ecosystem close to the glacier, but also suggests that outlets of subglacial discharge may change their position along the terminus quickly, providing new insight into the dynamics of the subglacial hydrology of the glacier.

What does the future hold?

Increased surface melt and glacier runoff may initially strengthen and prolong plumes at the glacier terminus during the melt season. However, while this may temporarily lead to an increase in the availability of food for top predators, it will also hasten the glacier’s retreat. As Kronebreen retreats, it will move into progressively shallower water until it eventually becomes land-terminating; when that happens, this important foraging area will be lost.

This story was originally published in the Fram Forum