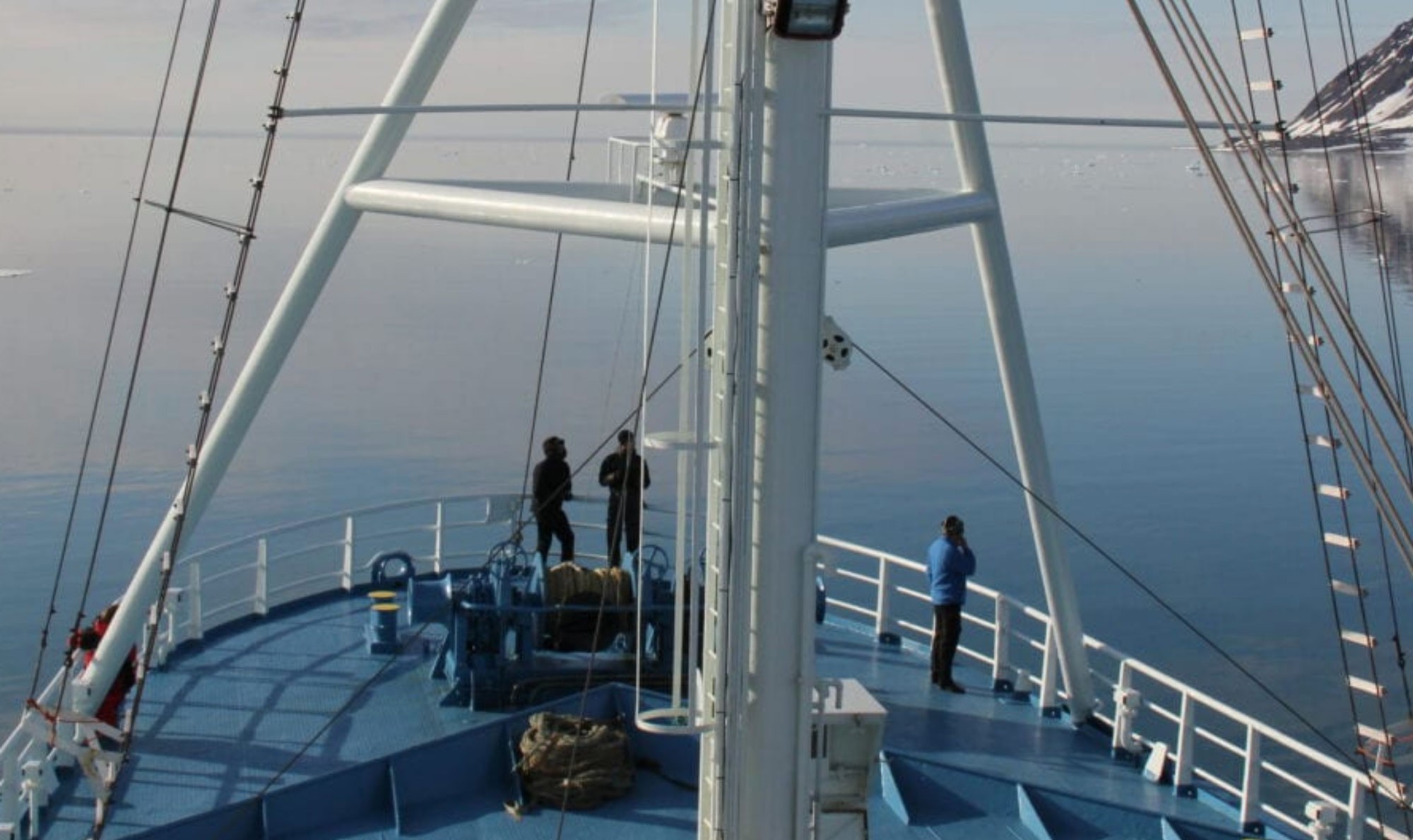 September onboard the research vessel Lance north of Svalbard. Kristen, our mooring engineer, is happy. There is no sea ice to be seen anywhere – ideal conditions to find the instruments we left here two years ago attached to a rope, anchored to the seafloor, and held upright under water by several buoys.

Without ice, Lance is free to move around and locate the mooring using the ship’s echo sounder. Kristen sends the command to the mooring to let go of the anchor, and the rest of us scan the water surface. Luckily, the buoys are easy to spot when they come up. The crew lifts everything onto the deck, and a little later, we have two years of temperature, salinity and current data in our hands. They will help us understand how the ocean is changing around Svalbard.

In recent years it has become increasingly normal that the ocean around Svalbard is free of sea ice. While this is good news for ship traffic, fisheries, and potential other exploitation of resources around Svalbard, a shift towards an ice-free normal can also be seen as an alarming sign of drastic changes in the climate system. 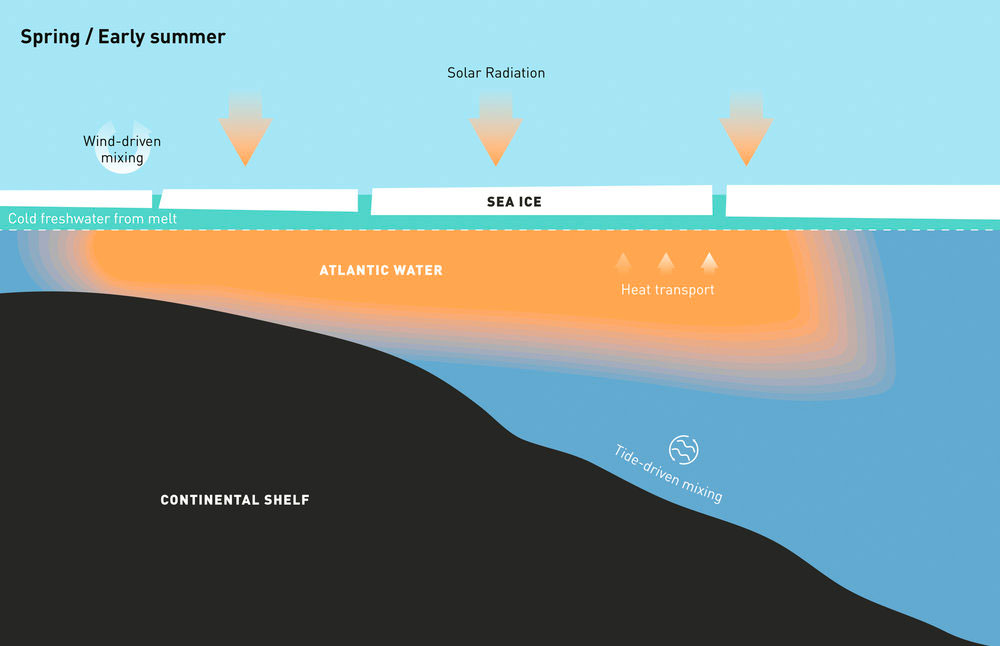 But these patterns are changing. New research at the Fram Centre reveals an altered inflow of warm water and ongoing changes to the stratification (i.e. the gradient between fresher surface layers and more saline Atlantic Water) and emphasises how these changes play a key role in enhanced warming and reduced sea ice cover in this region.

North of Svalbard, Atlantic Water is carried by a narrow current along the continental slope and is pushed below a layer of Arctic Water as it travels eastwards. In recent years, the Atlantic Water has been able to continue at the surface further east than before throughout much of winter. The Fram Centre “Arctic Ocean” Flagship project A-TWAIN has been monitoring the Atlantic Water boundary current since 2012 using an array of moored instruments north of Kvitøya. Results from this project show how the heat in this boundary current, in combination with wind-driven mixing and tides, has contributed to keeping the region free from sea ice until the middle of winter, when sea ice appears and a cold and fresh meltwater layer is established. 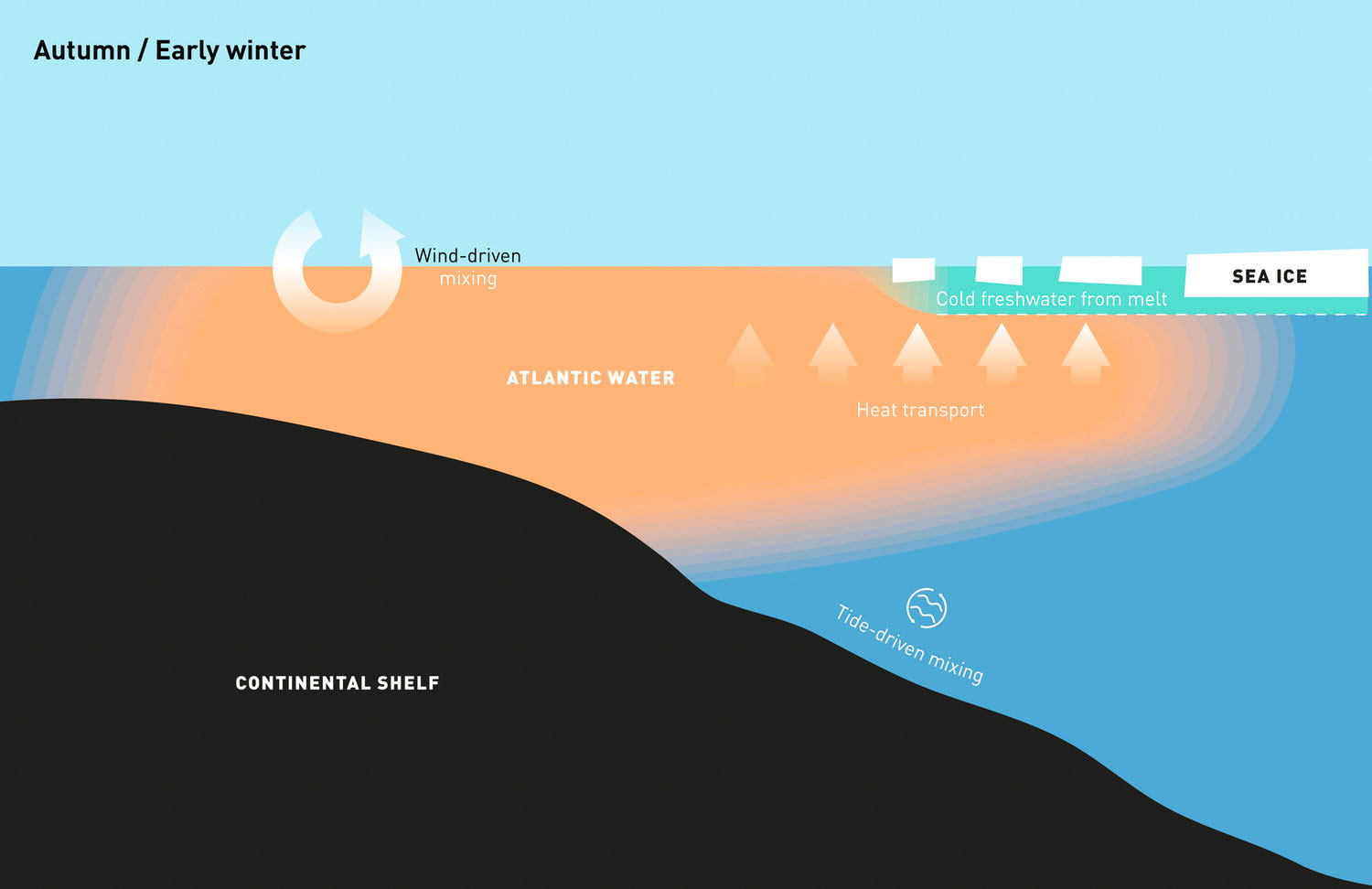 This thin layer of cold water, which can be formed locally by sea ice melt or can be moved in from the north by wind, protects the sea ice cover from the Atlantic Water heat below.

The largest inflow of warm water from the North Atlantic occurs in autumn and early winter. During this time of the year, large pulses of water with temperatures of up to 5°C arrive at the continental slope north of Svalbard. With longer periods of open water, the wind will mix the upper part of the water column more efficiently, and the surface will not freeze despite very low air temperatures and the sun being below the horizon. It is only when the temperature and volume of incoming warm water decrease later in winter, and the surface becomes sufficiently cold and fresh, that sea ice forms locally, or that sea ice blown into the region from the north, can persist and not be melted by the Atlantic heat.

Behind the front in the northern Barents Sea, the layer of fresher Arctic waters is thicker and more persistent than north of Svalbard: winter-cooled water with temperatures down to freezing-point occupies the upper 100 m of the ocean. Here, the “Arctic layer” persists and remains cold through the summer, thereby making the conditions ready for sea ice growth earlier in autumn and winter.

The Institute of Marine Research together with its Russian partner, PINRO, have been monitoring the marine environment in the Barents Sea in late summer since 1970. A new study using this extensive set of observations of ocean temperature and salinity shows that vertical mixing between the Arctic and Atlantic layers brings up heat and salt. The salt flux means that a freshwater input is needed to sustain the freshwater reservoir and stratification. Using satellite data in combination with the hydrographic data, the study shows that sea ice import into the Barents Sea is the most important freshwater source.

Recently, a decline in sea ice import and freshwater input has led to a major loss of freshwater, weakened ocean stratification and facilitated efficient vertical mixing between the layers, resulting in extreme warming of the Arctic layer. This heat is then released to the atmosphere in winter. This contributes to the development of the Barents Sea as a hotspot of Arctic warming, with the highest rates of atmospheric temperature rise and winter sea ice decline in the Arctic. Unless the freshwater input recovers, the stratification can break down and the entire region could become part of the Atlantic domain, where Atlantic Water occupies the entire water column.

The fresh surface layer in the northern Barents Sea is maintained by melting sea ice imported from the Arctic Ocean and is thus thicker during summer when more ice melts. The sea ice cover and the freshwater layer support each other’s presence. North of Svalbard, both sea ice and the surface freshwater layer are strongly influenced by wind, and fresh water is brought in both through sea ice melt and by advection from further north and east in the central Arctic.

As climate change is leading to strong warming in the Arctic, both in the ocean and in the atmosphere, and to a drastic decline in sea ice extent in all seasons, less sea ice is transported into the northern Barents Sea, and local freshwater volume decreases. This, in turn, allows the upper ocean to warm dramatically from below, contributing to the fastest temperature increase and greatest winter sea ice decline yet observed in the Arctic. North of Svalbard, the sea ice is thinning and melting faster than before, enabling the Atlantic Water to stay at the surface further east than it used to. Prolonged ice-free periods will enable more direct influence of the wind on mixing in the ocean. At the same time, the efficiency of tides in redistributing heat might change as stratification weakens.

It will be important to follow this region closely in the coming years. The A-TWAIN mooring array north of Svalbard is continuing to record the properties of the inflowing Atlantic Water boundary current, and new projects will help extend the array. Later in 2019, Kristen will be back at sea to search for the moorings, recover the instruments, and put out new moorings so that we can slowly build up a longer time series also in this region.

The annual monitoring of the Barents Sea by IMR and PINRO continues and is being extended with the new icebreaker RV Kronprins Haakon.

The Nansen Legacy project expands the interdisciplinary research, enabling us to include more chemical and biological parameters in our work and to further investigate linkages between the northern Barents Sea and the region north of Svalbard, the entrance to the Arctic. With the observed rapid climate change, will larger parts of the Eurasian Arctic shift towards an Atlantic climate? Will a new frontier region develop further east in the Arctic? How will the ongoing changes affect societies and ecosystems around Svalbard, the Barents Sea and the Norwegian mainland? The Fram Centre with its partner institutions and key projects are in a very good position to take a lead in understanding how our region will develop in the near future.

This story is originally published by the Fram Forum, the journal made by the Fram Centre