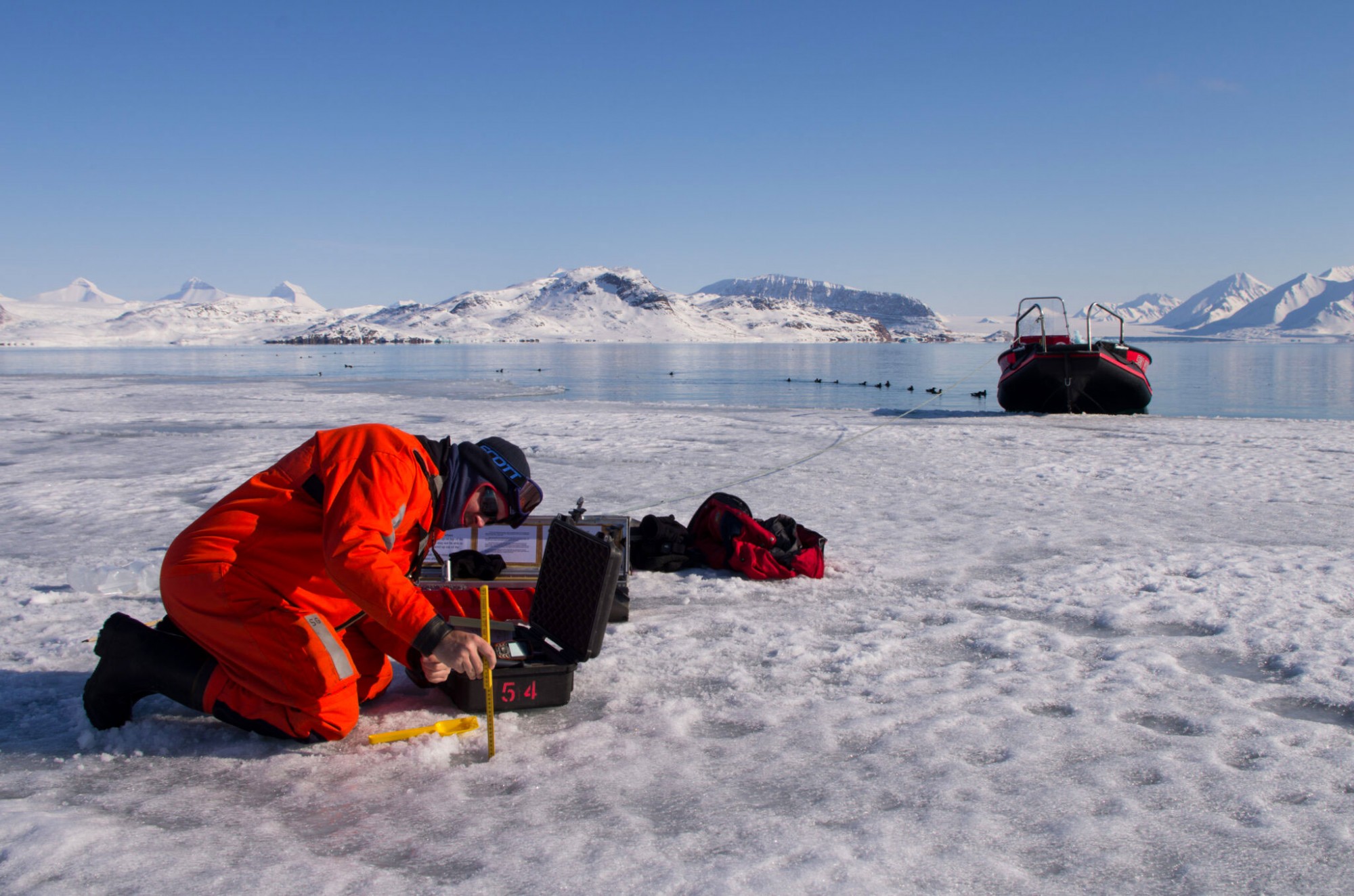 Sea ice covers parts of fjords in Svalbard for a limited time during winter and spring. The ice plays important roles for climate processes, such as heat and radiation fluxes between atmosphere and fjord water, and for the fjord’s ecosystem. Through the years, many studies have focused on Kongsfjorden.

While Kongsfjorden is a site of long-term monitoring of sea ice by the Norwegian Polar Institute, add-on studies are performed to study specific process and to improve fjord ice observations.

The objective of the project “Mapping Sea Ice” is to establish more efficient methods for retrieval of important fjord ice parameters from remote sensing data. This will provide accurate information on sea ice – both current status and future changes – thus informing work in climate and ecosystem science.

Here we give an overview on this project, and related results from the Norwegian Polar Institute’s long-term sea ice monitoring in Kongsfjorden, and from the CIRFA Centre for research-based innovation, led by UiT The Arctic University of Norway.

Systematic long-term fast-ice monitoring for inner Kongsfjorden started at the Norwegian Polar Institute in 2003; it includes mapping of sea ice extent and in situ sea ice measurements at several sites in the fjord. Sea ice extent maps are drawn by hand based on visual assessments and photographs of the fjord surface from the top of Zeppelinfjellet (474 m a.s.l.) near Ny-Ålesund. Ice and snow thickness and freeboard are measured in and next to drill holes.

Data on ice extent and thickness are needed for quantitative estimates of sea ice mass balance, and to determine long-term trends and interannual variability. In addition to the pure monitoring of thickness and extent, other physical and chemical properties are observed when conditions allow, and when specific process studies can be added onto the monitoring. This also includes validation and calibration of satellite remote sensing.

Satellite-based remote sensing techniques offer an important alternative to ground observations thanks to high temporal resolution and consistency of the data. Optical data are relatively cost-effective and easy to process, but depend on daylight and clear sky conditions. Radar sensors such as synthetic aperture radar (SAR) have the advantages of being independent of daylight and clouds, and they can offer richer information about ice conditions, but processing is more complex. Typical satellite products used for climatology studies are based on low-resolution passive microwave sensors, which cannot resolve the details in coastal zones. Ice charts for Svalbard have been based on medium resolution optical satellite data since the early 1980s, and on high-resolution SAR for the past ten years.

Snow thickness measurements are important since snow affects the surface energy balance of the sea ice. It is relevant for the ecosystem, as it determines how much light reaches the water under the sea ice. Snow is also important for ringed seals, which give birth to their pups in snow dens on the ice. Photo: Jean Negrel / Norwegian Polar Institute.

We are currently working on improving the automated extraction of sea ice parameters to provide better support for climatology studies and ice chart validation. Work includes methods to extract information on fast ice from optical data, and classify sea ice types from SAR products. Features such as ice edge positions observed in situ are compared with those detected using SAR products, showing both possibilities and limitations of ice edge mapping

Unmanned airborne systems (UAS) have been used over Kongsfjorden and surrounding areas regularly during the past decade. Advantages of such systems compared with manned aircraft are lower costs and less environmental impact. However, UAS still require an experienced team on site, and the payloads are substantially smaller than for manned systems.

The Hamnerabben airport at Ny-Ålesund has a specific facility for UAS. The aircraft currently in use is a CryoWing Scout, which superseded the CryoWing Roamer a few years ago. The Scout carries a camera and an inertial navigation system. While earlier flight tracks were pre-programmed, the system has recently been refined so that flight tracks can be adjusted in real time. This can be extremely useful. For example, automated decision-making based on the images obtained now allows us to follow the ice edge. In the 2018 field season, the UAS payload was further extended with an infrared camera to ease discrimination between open water and thin ice.

Systematic observations of sea ice extent during the period 2003-2017, plus preliminary results from 2018, reveal that the inner part of Kongsfjorden is usually covered by seasonal fast ice.

This ice forms sometime between December and March and persists until April-June. Before 2006, the sea ice typically extended into the central part of the fjord, but during the last decade the sea ice has often been restricted to the inner northern part. Most years after 2006 had low ice extent and a short fast ice season.

Based on in situ measurements of ice and snow thickness, and freeboard since 1997, we have found that the thickness of both fast ice and snow has declined over the observation period, towards thinner ice and snow cover. During the first years of the monitoring, fast ice was about 0.7 m thick at its seasonal peak. In recent years, except for 2011 and 2018, the peak thickness has been around 0.2 m. In parallel, snow thickness decreased from around 0.2 m to less than 0.05 m. However, the interannual variation in ice extent and ice and snow thickness appears to be substantial. Advection of Atlantic water into Kongsfjorden in combination with relatively mild winters are likely the main factors underlying changing fast-ice conditions in Kongsfjorden.

Sea ice monitoring in Kongsfjorden is not only used for climate change research: it also contributes to past, ongoing and future process studies in many disciplines, conducted in the research village of Ny-Ålesund.

The combination of in situ, airborne and satellite observations done in this project gave promising results. Follow-up work within “Mapping Sea Ice” and other related projects will aim at (i) standardising and implementing routine use of remote sensing combined with in situ observations and sampling, and (ii) applying interdisciplinary approaches in other locations such as Storfjorden, another Svalbard fjord where sea ice monitoring is carried out. Thus, our understanding of the interconnected physical and biological processes will be improved, and the connections between changing coastal sea ice conditions and ecosystem processes in Svalbard will be better quantified.

This article is originally published by the Fram Forum