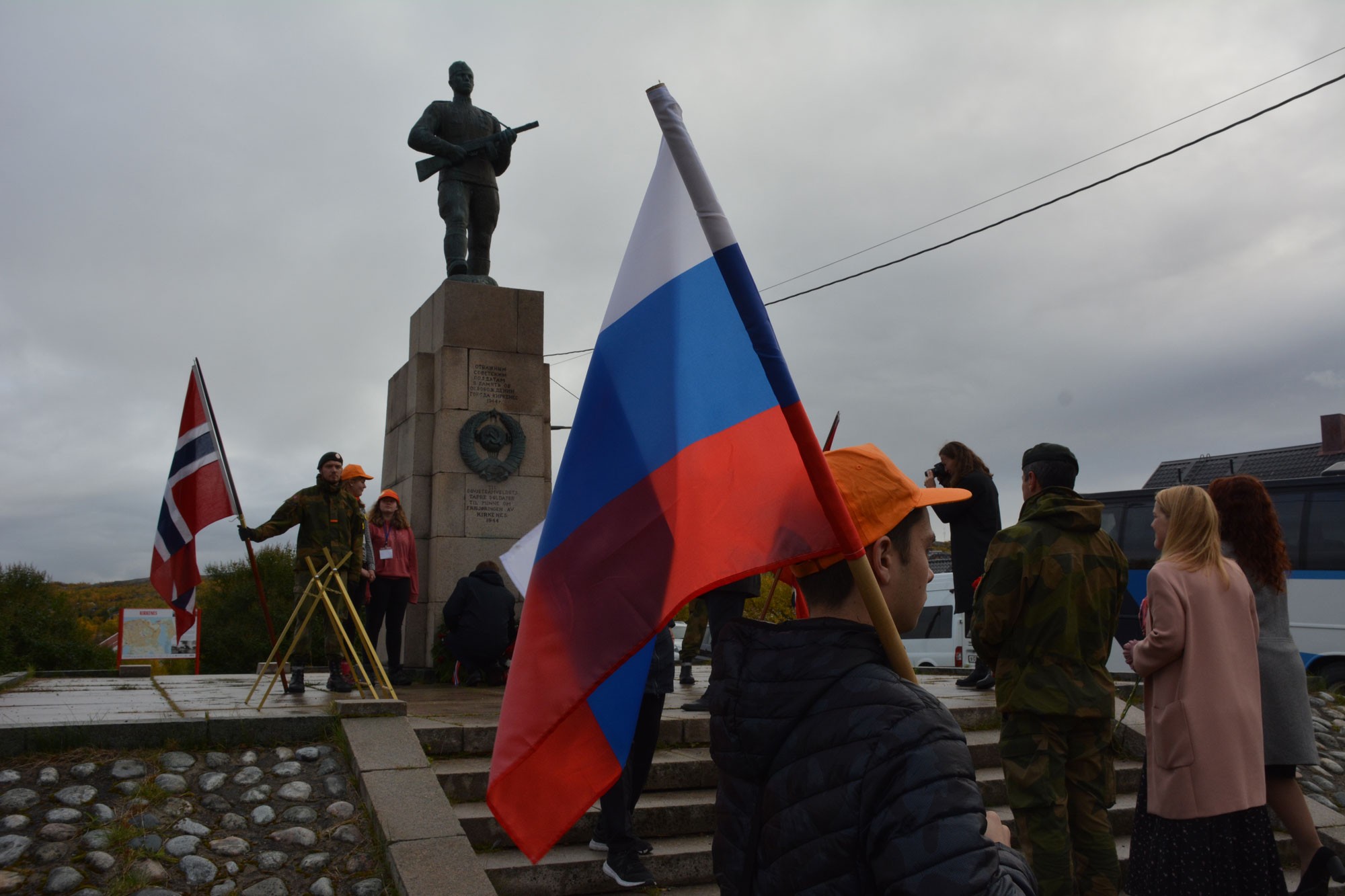 Ceremony at the 2WW memorial in Kirkenes. Photo: Atle Staalesen

Is Berg on his way home after almost two years in FSB’s Lefortovo prison? The Russian Foreign Ministry says news about an imminent release of the retired border inspector convicted for espionage is nothing but «insinuation».

Big festivity is underway in the small Norwegian town located only few kilometers from the border to Russia. It is 75 years since Soviet forces pushed Nazi German troops out of the Kola Peninsula, across the border to Norway and westwards through the region of East Finnmark.

On 25th October 1944, the Soviets made it to Kirkenes, the town that for more than three years had served as Hitler’s bridgehead in the advance on Murmansk.

But locals appear more interested in getting back home Frode Berg, the former border inspector that since December 2017 has been locked up in the Lefortovo prison in Moscow on charges of espionage.

Speculations about Berg’s release have hiked as the war commemorations have gotten closer. Additional hope has been sparked by recent news from Lithuania that a prisoner exchange with Russia is immanent and that Berg might be among the ones involved.

A source in the Lithuanian security service told the Baltic News Service that a Norwegian citizen is part of the deal. Included are also a Russian citizen and two Lithuanians. The former is believed to be Nikolay Filipchenko, the agent that in 2017 was sentenced to ten years in jail. The Lithuanian Parliament on Friday adopted legislation that prepares the ground for the exchange, VG reports.

The Berg-case has attracted wide-reaching international attention, including in Russia. The possible swap of spies was reported on by newspaper Kommersant in September this year.

Many locals in Kirkenes now believe Frode might be about to return home. Some even hope he will make it for next week’s celebrations devoted to the Soviet liberators of his home town.

Little information about proceedings in the case has leaked from the two countries’s authorities. As Sergey Lavrov was in the process of preparing his visit to Kirkenes, his top press spokeswoman Maria Zakharova on Thursday this week rebuffed speculations about an upcoming release of Berg as «insinuations».

«I have no new information in this case, no concrete materials that I could share in connection with these publications,» she underlined in a press conference.

«I have no perceptions in this regard […] We continue to work under the precondition that the states soon will reach an agreement,» says Brynjar Risnes, the Norwegian lawyer of Berg.

«I do not dare comment on whether it could happen as early as next week,» he told the Barents Observer.

According to Risnes, Frode Berg has always declared himself innocent on the espionage charges. He was detained in downtown Moscow on the 5th December 2017 and reportedly carried €3.000 in cash and letters to Russian conspirators.

The detention came just few days prior to FSB’s anniversary celebration of the Cheka, its ruth Soviet predecessor that was established 100 years ago.

On the 16th April 2019, Berg was sentenced to 14 years in jail for violation of Article 276 in the Russian Criminal Code («espionage»). According to prosecutors, Berg had collected information about Russian nuclear submarines. An employee at a military plant had provided the secret information, and it was all staged by the FSB.

Berg has reportedly not appealed the sentence, and this week it became known that he has submitted a plea of pardon, Dagbladet reports.

Few know the Lefortovo prison and the practices of the Russian Security Service better than Vladimir Martynenko. In 2010, the professional musician from Murmansk was detained by the FSB and charged with espionage in favor of China. He subsequently spent 26 months in Lefortovo and another 2 years and eight months in a prison camp in Siberia.

Martynenko is confident that Frode Berg is innocent on the charges, like himself.

«You know, the FSB is not itself able to grab the real spies, so it invents spies in order to justify its own existence and high salaries,» Martynenko told the Barents Observer in an interview in 2018.

According to the singer, who used to tour Scandinavia, there is a spy-mania now prevailing in his former homeland. Today Martynenko lives as a free man outside Russia.

He believes Berg fell victim of a carefully planned plot by the FSB and that the former Norwegian border inspector is not guilty on the charges brought upon him by the Russian security service.

«Reportedly, Frode was detained with letters and money, but that in itself is no crime,» Martynenko says, and argues that Berg did not collect information and never planned to do so.

«Consequently, he does not fall under Article 276 in the Russian Criminal Code,» Martynenko underlines to the Barents Observer.

The 64-year old pensioner from Kirkenes has for the past almost two years been locked up in the high-security prison in downtown Moscow.

His cell is 2x6 meters big and includes two beds, a table, closet, bench, a sink and a toilet.

«In Lefortovo you have the constant feeling of living in a toilet,» Vladimir Martynenko recalls.

The former inmate is highly critical of the way Frode Berg’s lawyers have handled the case. He argues that lawyer Risnes, as well as his associate Ilya Novikov, let their client down when they in April 2018 announced to Norwegian media that Berg had worked for the Norwegian intelligence service.

«Suddenly there comes this article in newspaper Dagbladet where Brynjulf Risnes in an interview «torpedoes» Frode Berg. There was still no court verdict and he declares Frode’s guilt.»

Without the disclosures from the lawyers it would have been hard for the FSB investigators to prove Berg’s guilt. They would have needed a confession from Berg himself, Martynenko says.

In consultation with Frode

Brynjulf Risnes strongly disagrees that the revelations in the media became instrumental for the verdict against Berg.

«It had absolutely no importance for the case,» he underlines in a comment to the Barents Observer. «There are many uncertainties in this case, but on this issue I am absolutely confident.»

According to the lawyer, the decisions were made together with Frode himself.

«It was based on a complex evaluation built on our knowledge of the case and the knowledge of other parties, as well as what would later inevitably become known,» Risnes says.

He does not exclude that mistakes have been made by the lawyers, but underlines that he has «no such clear indications so far.»

«It is not in the interest of the Kremlin to simply hand over Frode. Putin can now play the way he wants and request from Solberg [the Norwegian Prime Minister] whatever he might want in return.

According to Martynenko, who is still marked by his torments in the Lefortovo prison, Frode Berg has become a hostage in a politicized case that has become a complete failure for Norway.