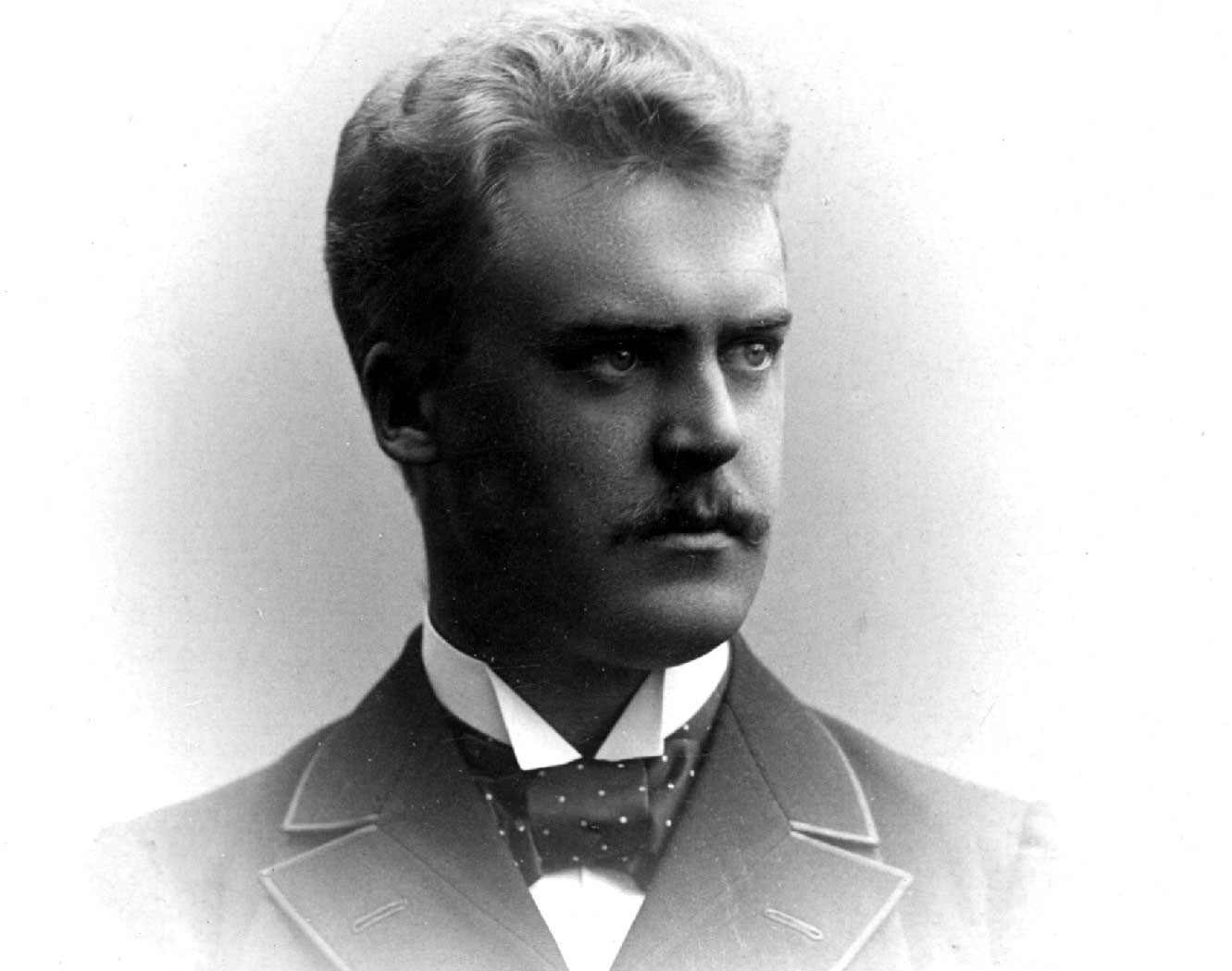 One hundred fifty years have passed since the birth of Johan Hjort (1869-1948). Best remembered for his groundbreaking theory from 1914 on the natural fluctuations of fish stocks, Hjort paved the way for materials and methods that are used to this day, not least in climate studies.

Portrait of Johan Hjort during his time in Bergen, probably taken around 1905. Photo: Institute of Marine Research.

Johan Hjort was a marine zoologist, the first head of the Norwegian Directorate of Fisheries and an important figure in building national and international institutions. While at the Directorate, he worked to modernise fisheries. Research was an important element in building a useful knowledge base, and a key tool for enhancing profitability and scaling up the industry. Hjort’s efforts within marine research focused on seasonal fishing for cod and herring.

These fisheries were of great economic importance to Norway and a research focus for Hjort and those who later followed in his footsteps. As a marine scientist, Hjort formulated bold hypotheses and made use of opportunities close to home. And he loved being at sea.

At the outbreak of the First World War, Hjort presented an explanation of the natural causes of the great fluctuations in catches of fish; this led to a fundamental shift in the way we understand fish biology. His theory that recruitment of juveniles to fish stocks is subject to natural variations has been the basis for over a hundred years of research into which physical and biological factors determine the size of a year’s class, i.e. the number of new individuals who join the fishable part of the population each year. Hjort examined herring, cod and other codfishes in the Norwegian Sea. His theory would later be tested on other fish stocks and species. Hjort was the mastermind, but he conducted his research with a small group of researchers at and outside the Directorate of Fisheries, and in collaboration with the International Council for the Exploration of the Sea (ICES).

Where fish and science meet

Hjort was strongly influenced by his scientific background, his social mandate and his political views. In a broader economic, cultural and research policy context, the ocean and fish are among several examples of the role that science and other professions have played in the emergence of modern Norway.

Marine research in Norway was influenced by the structure of the nation’s fisheries, their economic importance – and the biology of herring and cod. The fisheries were vital to the national economy, especially in the 1800s.

Landed catches alternated between good years and lean years. Fishermen and scientists asked themselves why the catches changed so much from year to year. In Europe, the greatest concern was for overfishing. Where the North Sea and the Baltic Sea being overexploited? Would there soon be no fish left? It was the search for natural explanations to the variations that brought Hjort and his older colleague Georg Ossian Sars (1837-1927) to the forefront of research.

The Norwegian authorities feared reduced migration of cod and herring to the coast, leading to a corresponding reduction in export earnings. The importance of fisheries on a national scale, along with senior civil servants’ faith in the usefulness of scientific enquiry, explains the parliament’s decision, in 1860, to fund a permanent commission tasked with researching the natural conditions that supplied fish for the fisheries. A milestone was reached in April 1900 when the parliament created a professional trade management office for saltwater fisheries, based in Bergen: the Fisheries Commission (Fiskeristyrelsen). Six years later, the Commission was renamed as the Directorate of Fisheries (Fiskeridirektoratet).

Marine research was a unifying hub in the management of a geographically dispersed and complex industry. Science assumed a strong position within the Directorate and marine research – always costly – gained both a foothold within national institutions and access to funding outside the meagre budgets of academia. That strengthened the position of research.

The Directorate of Fisheries also conferred other research advantages: it had the attention of politicians, ensured availability and proximity of expert fishermen and seafarers, and easy access to the Northeast Atlantic and the North Sea, as well as facilitating sea voyages.

Studying herring was one way to demonstrate the economic benefits of marine research and focus the field’s expertise on solving a joint problem. Hjort’s assistant Einar Lea perfected the method, standardising collection and reading of results for ICES. Winter rings were darker and more clearly delineated than summer rings; therefore, age was read by winters. Hjort had some luck in 1904 when nature gave the researchers a strong year class of what is now called Norwegian spring-spawning herring. This year class could be monitored as a distinct peak in Hjort’s data on catch composition.

Hjort’s results on herring put him at the international forefront of marine research, as several of ICES’ European member states had significant herring fisheries.

Hjort’s focus on the scale method met with interest, but also resistance from ICES. Especially, a group of British zoologists objected to the idea that the zones on the scales actually represented annual growth rings. They also criticised Hjort and his team for a perceived lack of competence in statistics. Most members of the Norwegian group were zoologists without in-depth knowledge of statistics beyond descriptive analysis. This criticism angered Hjort – he was a temperamental person – but it probably honed the quality of Lea’s methodological studies. It wasn’t until around 1930, that ICES (and thus also international marine research) accepted Hjort’s method. By then he had been reading fishes’ ages in scales for a quarter of a century. The moral of the story is that research (and, not least, recognition) often takes many years.

The question of recruitment

What determines recruitment into fish stocks is still largely an unresolved question. We now know a lot about how populations are replenished each year, but not the degree of interaction between the countless environmental factors that lead to a few years with very strong year classes and another year with very weak classes. In Hjort’s vocabulary, this is called “natural fluctuations” or “number of offspring”. The concept of recruitment was probably established after 1945. Research on recruitment will continue simply because it is a key factor in predicting future stocks. The central question is how large the recruitment will be next year and in following years, which in turn sets constraints on how much fishermen can harvest from the sea, in the form of quotas.

Although we currently have a vast array of tools at our disposal – satellite observations, theoretical ecology, genetic analysis, hydrophones onboard state-of-the-art research vessels, and highly complex ecosystem models – recruitment is still poorly understood. It is impressive how Hjort often arrived at conclusions that would later prove to be correct, especially for northerly latitudes. Pragmatically speaking, we will probably never fully understand the recruitment process: it involves countless random factors and a single minor change can have major consequences over time. Nevertheless, age determination will continue to be an essential part of stock monitoring and subsequent calculations. We need to continue monitoring the formation and development of new year classes.

A treasure chest of scales and otoliths

Hjort’s efforts to establish time series have had far-reaching implications for studies of marine stock and the environmental history of oceans and seas. He would have been astonished if he knew how many marine scientists have used and re-used herring scales and otoliths.

Scales are still used to assess stocks of Norwegian spring-spawning herring – a routine continuation of a tradition that started in 1904. Otoliths and vertebrae are also examined to better distinguish between different herring populations;[1] for example, there are many different populations along the coast from the Swedish border to Troms. For scientists studying North Sea herring, checking otoliths is standard routine – the herring population in this area is divided into large, distinct spawning components that may intermingle for parts of the year.

Today, Norway has the world’s longest time series on the population size of marine fishes, represented by spring-spawning herring and cod (skrei). This is thanks to the targeted collection of scales and otoliths and associated biological information – fish maturation status, weight and length – as well as good catch statistics and monitoring of fishing activities. All this has been going on since Hjort’s time. Fortunately, Russia began regular hydrographic measurements in the Barents Sea in 1900, establishing the data set oceanographers call the Kola Section. This means we have two uniquely long time series for the Northeast Atlantic that make it possible to study and find connections between various changes in ocean productivity.

The Institute of Marine Research has many shelves full of scale and otolith samples. Today’s marine researchers can use this material to answer current research questions – and the boxes will remain on the shelves waiting to provide answers to questions that have not yet been asked. Studies within theoretical ecology have already demonstrated that populations under heavy pressure from fishing change by means of local adaptations. Microscopic remnants of DNA from archived otoliths (and scales) are now being used to clarify evolutionary (genetic) changes from the early 1900s, when there was essentially no fishing, through several decades of increasing harvests, to today’s well-regulated fisheries. The University of Bergen is home to otoliths hundreds of years old and thus important in an even longer time frame.

[1] The concept of population overlaps with the concept of stock, but marine scientists often use the term stock when referring to fish and other marine animals that are harvested commercially.

Hjort and his colleagues used fish scales and otoliths as birth certificates for fish. They could never have imagined how this material can now be put to use in research. Exciting new fields are opening up, such as otolith microchemistry, where different isotopes extracted from the otoliths give clues about what a fish has eaten, or what physical environment it lived in. If used on selected material from the historical archives of fish scales and otoliths, this methodology can – at least theoretically – provide a long and truly unique biological time series. Data from time series are crucial for scientists who wish to develop scenarios for the future. Long time series are particularly important as historic reference points; they provide background information that will be required to interpret the effects of climate change, not least in the northern latitudes.

Past, present, and future, all in one

A little more than a hundred years ago, Hjort and his peers gathered knowledge that forms the basis for current marine research and fisheries management – nationally and internationally. He was the right man, at the right time; his social mission, proximity to the fisheries industry, and willingness to create an international professional community, combined with his transformational theory and methods, laid the foundation for Norwegian marine research.

Although Norway’s position has seen periods of progress and stagnation, Johan Hjort’s position remains strong. Since his time, several new methods have evolved and his theory from 1914 has been elaborated and refined – but it has not been replaced. Hjort’s paper is now considered an international citation classic. Marine scientists in 53 countries have referred to him, and even now, a century later, Hjort 1914 is cited about 40-50 times a year. This is exceptional for a scientific publication.

We celebrate the 150th anniversary of Johan Hjort’s birth in 2019. One question for the Institute of Marine Research/ICES anniversary in Bergen in June is whether his 1914 theory has reached the limit of its usefulness and should be replaced, or if it remains valid. Do current fisheries research and fisheries management need a new theory for a holistic, ecosystem-based approach in light of climate change and the significant alterations we expect in the marine environment?