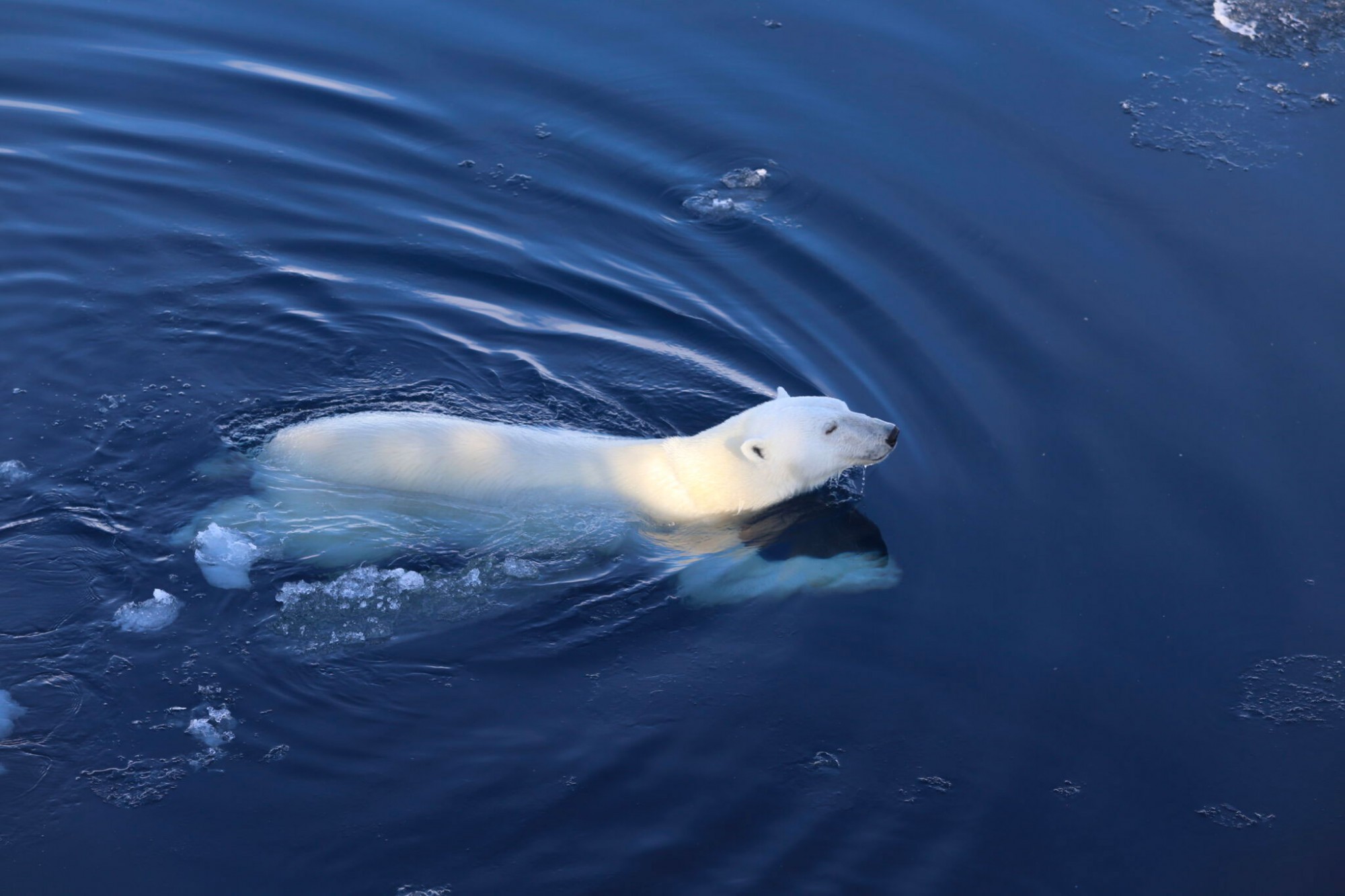 Ursus maritimus – the polar bear’s Latin name clearly identifies it as a marine animal, not a terrestrial one. Recent studies show they deserve this name: not only do they live much of their lives near sea ice; they also spend more time in the water, swim farther and dive deeper than was thought previously.
Read in Russian | Читать по-русски

In 2008, scientists from the United States deployed a subcutaneous temperature logger, in combination with a telemetry collar, on a female polar bear in the Beaufort Sea. Geographic position, internal temperature and ambient temperature were measured simultaneously, making it possible to figure out when the bear was swimming and when she was walking on sea ice. This bear swam continuously for more than nine days, travelling 687 km. These data proved that polar bears are able to swim for much longer distances than previously thought.

In recent years, satellite collars deployed on polar bears have become more sophisticated and many now record time spent in the water, using a saltwater switch (two contact points that carry current between them when in salt water). For Svalbard bears, we have documented several cases where bears have swum more than 100 km (280 km at most) and been in the water continuously for up to four days.

Such long swims in the Barents Region are always trips between islands in the region’s archipelagos and the sea ice edge, where most bears hunt much of the year. Pregnant females increasingly often face long swims in the autumn to return from the ice to the islands to make their maternity dens in drifts of snow on land, where they give birth to their cubs in midwinter. This situation is rather new. A few decades ago, sea ice covered much of the ocean surrounding Svalbard for most of the year and corridors of sea ice were virtually always available between the islands and ice-covered hunting areas. Back then, bears rarely had to swim long distances.

Long swims are interesting in and of themselves, but it is also important to know about swimming behaviour on a daily basis, how it varies with season, habitat and other factors. A recent study from Svalbard (see further reading) showed that most female polar bears are very aquatic.

How much time the bears spent swimming varied a lot throughout the year, but in July, they spent two hours a day in the water, on average.

Individual bears also vary considerably in how much time they spend in the water.

Mothers with small cubs swim much less than other females, particularly in early spring. Tiny cubs are unable to survive long periods in icy water, as they lack the fat layer that insulates larger, older bears when swimming. (Their fur insulates well in the air, but not when it is wet.) Thus, when they first emerge from the birth den, bear families are quite vulnerable in habitats with many open leads in the ice, and in areas with little sea ice.

It is important for the mother to get to good hunting areas quickly in the spring to regain weight so she can continue producing milk for the cubs, after a long winter in the den without eating.

We know that polar bears dive between and underneath ice floes when they hunt seals. Bears approach seals by stealth, swimming underwater so they are not detected. From time to time, they surface to check where they are in relation to the seal. Finally, when close enough, they do a final dive and emerge just in front of the seal’s resting place, and lunge onto the ice in an attempt to catch the prey. Polar bears also dive to find kelp and other things they like to eat, such as submerged carcasses. Our study from Svalbard revealed that adult female polar bears occasionally dived down to several metres depth. The record dive in the study was 13.9 metres!

Given the loss of sea ice in the Arctic in recent decades, it is good news that polar bears are able to swim long distances. In the Barents Region, including Svalbard, sea ice losses have been large, and predictions suggest that reductions will continue much faster here than in other areas inhabited by polar bears. Thus, we believe that bears in the area will need to swim even more in the future.

Good denning areas in eastern Svalbard have already been lost. In years without sea ice in the autumn, pregnant females do not get to these areas any longer. The energetic costs of long swims may be too high.

Pregnant females need sufficient fat reserves to ensure milk production, usually for two cubs, during a three-to-four-month period in the den without any access to food. The estimated cost of swimming is equivalent to 4 kg of fat per day! That is approximately five times the cost incurred by walking; thus a three-day swim equals the cost of a two-week long walk. If the mother has to swim a long distance to reach an island in autumn, it reduces her ability to produce milk for her cubs.

It is also important to note that young bears will not be able to swim long distances at all – they lose too much heat. Therefore, even though adult bears are good swimmers and divers, having to make more long swims due to sea ice loss is a serious threat to this remarkable species.