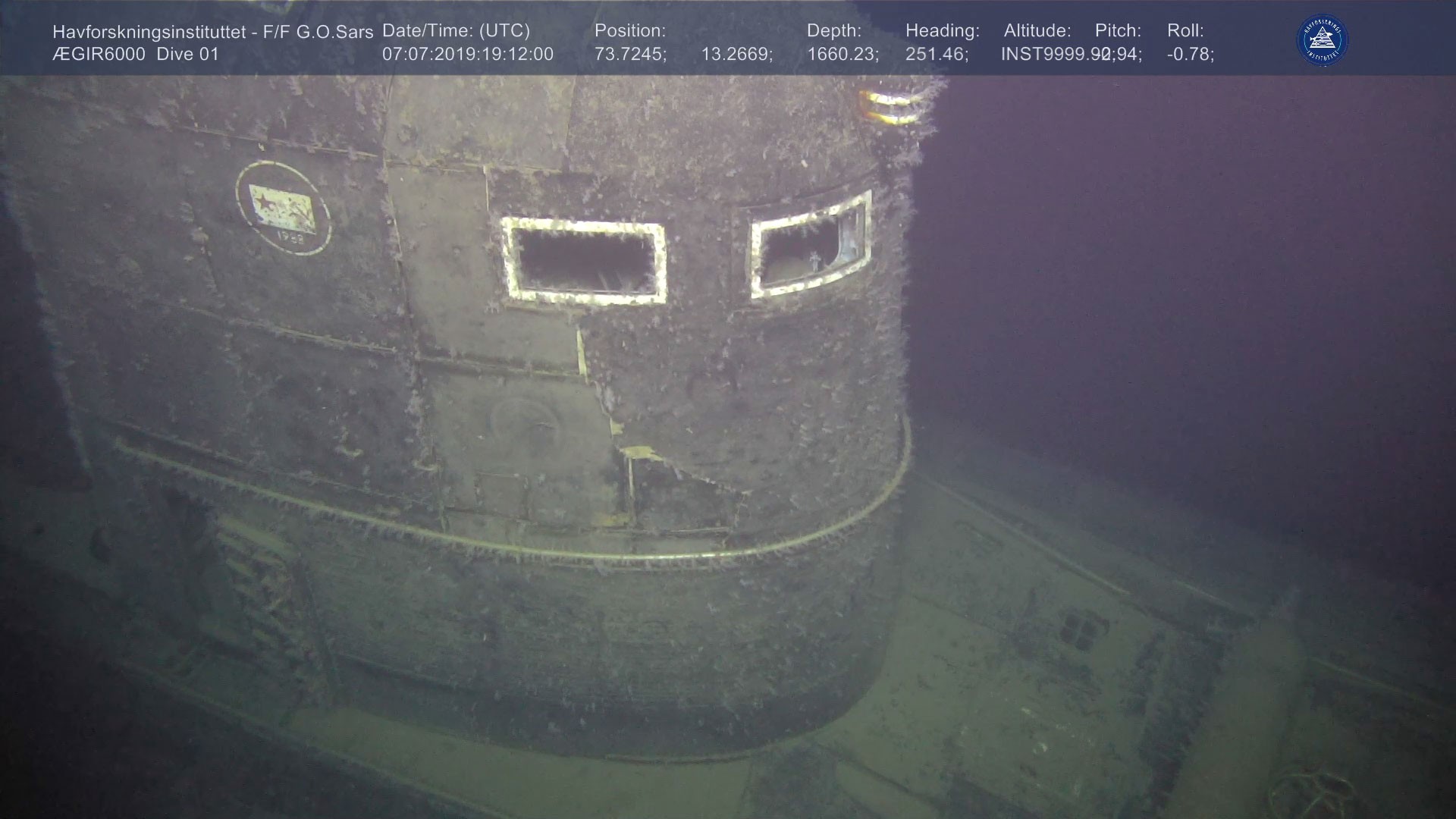 Expedition to the sunken nuclear submarine Komsomolets in the Norwegian Sea

On 7 April 1989, the Soviet nuclear attack submarine Komsomolets sank in the Norwegian Sea after a fire broke out. In the summer of 2019, Norwegian scientists finally had a chance to see the wreck on the seafloor with their own eyes and assess the status of any radioactive releases from the submarine.

The sunken nuclear submarine Komsomolets at the bottom of the Norwegian Sea. Photo: Institute of Marine Research/G.O. Sars and University of Bergen/Ægir 6000

The 2019 expedition to Komsomolets was organised under the Norwegian-Russian expert group for investigation of Radioactive Contamination in the Northern Areas, with participants from the Institute of Marine Research, the Norwegian Radiation and Nuclear Safety Authority, the Norwegian University of Life Sciences, and a Russian observer from the Research and Production Association “Typhoon”. The expedition took place on the RV G.O. Sars and used the remotely operated vehicle (ROV) Ægir 6000 to collect samples in order to detail the levels of radioactivity in the environment. Such information is important to understand any potential risks associated with Komsomolets and to ensure consumer confidence in Norwegian seafood.

Following the sinking of Komsomolets, a number of Soviet and Russian expeditions were carried out between 1989 and 2007 using manned submersibles.

Initial investigations showed that the front part of the submarine had suffered considerable damage, with holes and cracks in both the outer hull and the inner pressure hull. In 1994, the six torpedo tubes along with some holes in the torpedo section were covered to reduce the flow of seawater into the torpedo compartment. Releases of radionuclides from the reactor in Komsomolets have been detected in a ventilation pipe that forms a connection between the compartment next to the reactor and the open sea.

Norway has monitored the marine environment around Komsomolets annually since 1990 and releases from the reactor were detected in surface sediments and bottom water around the submarine in the early 1990s. However, since then and up to 2018, all samples collected around Komsomolets have shown radionuclide levels typical for the Norwegian Sea. However, these samples were collected using traditional equipment.

In 2019, the Ægir 6000 ROV gave Norwegian scientists their first opportunity to take water samples directly from the ventilation pipe where releases had been detected earlier, to take sediment samples within one metre of the submarine, and to sample biota growing on the hull. Video of Komsomolets on the seafloor clearly shows the damage to the outer and inner hulls in the forward section of the submarine.

Although the maximum observed level of Cesium-137 was approximately 800 000 times higher than typical for the Norwegian Sea (0.001 Bq/l), such releases are not expected to have any consequences for the marine environment due to the depth at which Komsomolets lies and the dilution of any releases. It can be assumed that releases from the reactor have been occurring since Komsomolets sank in 1989, but no unexpectedly high levels of radionuclides in sediments, seawater or marine organisms have been observed in the Norwegian Sea during this time.

All water, sediment and biota samples will now be analysed in greater detail to allow us to better understand the releases from the reactor and whether there have been any releases of plutonium from the warheads in the torpedo compartment. We expect a final report to be published in 2020.