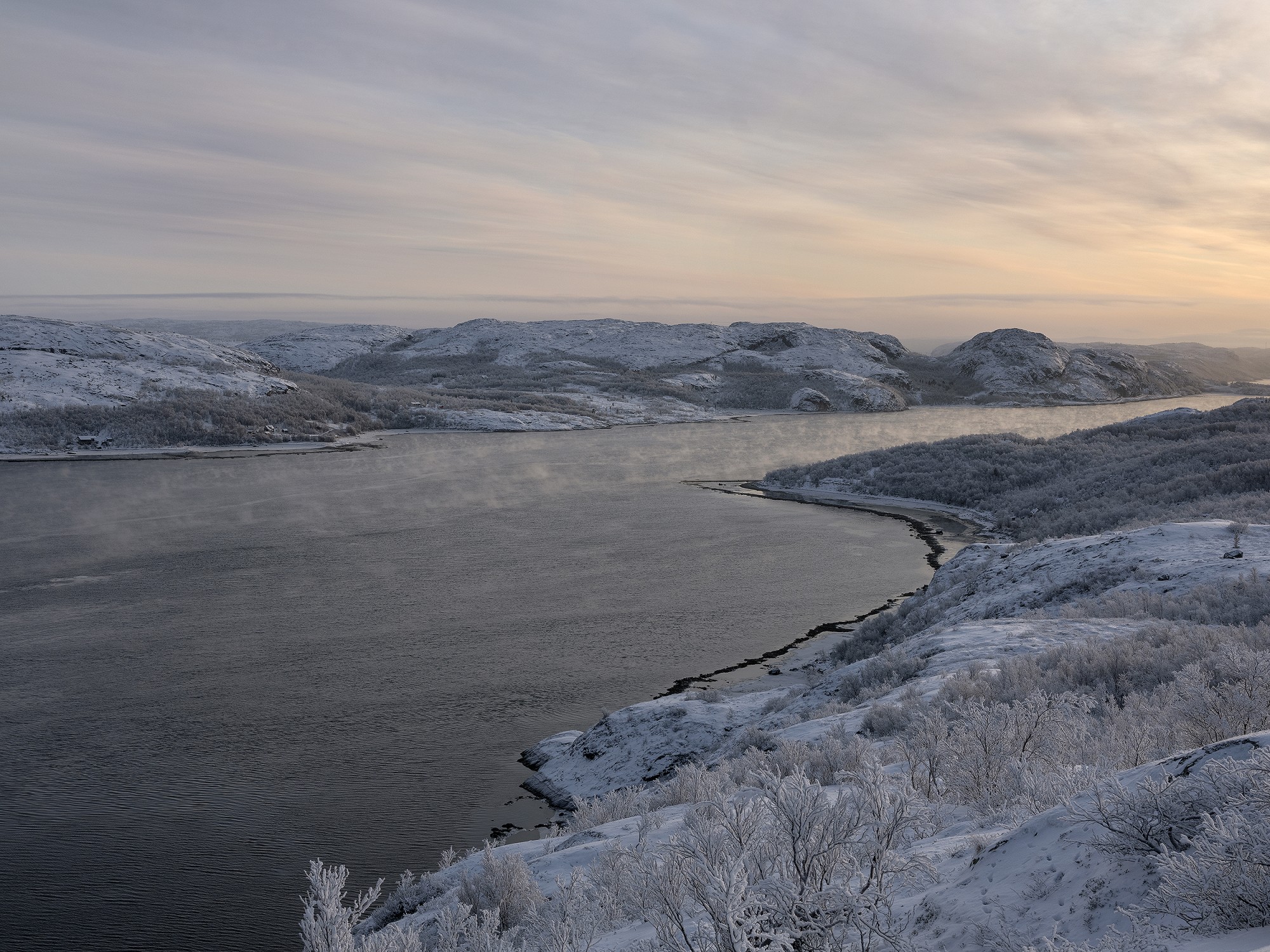 For a photographer and a journalist from southern Europe, the Pasvik River is the final frontier. Céline Clanet, a photographer living in Paris, and myself, a writer and journalist originally from southern France and living in Stockholm, have made many trips to the High North. It is a region that we simply love. We have been spending a lot of time there, for more than twenty years. We have talked about it often over the years, but strangely never worked together.

So it is no coincidence that when the opportunity arose, we chose the Pasvik River, the river that forms the border between Norway, Russia and Finland. For one simple reason: the Pasvik River alone tells the story not only of the High North, but also of the continent. Nothing less.

The Pasvik River alone tells the story not only of the High North, but also of the continent. Nothing less.

We followed it from Lake Inari in Finland, where it originates, to Kirkenes, where it flows into the Barents Sea. From the depths of Lapland, where it tells History, to the Arctic Ocean, where it meets future.

Lake Inari in Finland, where the Pasvik River rises. Finnish border guard Sauli Honkanen is very proud of his border.

“The fence here is too high for the reindeer to cross. The only ones who manage to sneak through the fence are Russian dogs, but that’s not a problem, they are being shot.”

The Pasvik border can be summed up like this, stories of reindeer and dogs trying to cross a border that men have closed. Norwegian reindeer on one side who would like to take advantage of the rich Russian pastures, untouched since the Cold War era, when the Soviets emptied the entire border area of reindeer herders. On the other side, stray dogs from Nikel, the closest Russian town to Pasvik, who have been deprived of food on the Russian side since the collapse of the USSR, and are thus forced to cross the border to find their food. In both cases, there are conflicts. On the Finnish side, we admit it: “We distrust the Russians, we have many reasons for that”.

It only takes a few kilometers to the north to hear a different tune, with the Norwegian border guards, facing the same Russians. “The Soviets freed us and left after treating the people here well,” said Lieutenant-Colonel Jan Marius Nilsen, head of the 700 Norwegian border guards divided into two companies. “We have a different relationship with the Russians than with the Finns”.

This river, one of the most watched in the world, is, according to the border guards, one of the calmest. Strange border, mysterious Pasvik.

In ancient times, the Pasvik region was the land of the Sami. The Skolts were the first Sami people to settle in Pasvik. They had been living on this land for centuries, fishing and hunting, keeping a few reindeers for transportation and milking. And then came the Finns, the Norwegians and the Russians with their claims on borders. And with them came the dogs.

Egil Kalliainen, a reindeer herder for five generations of Sami in the Pasvik valley, leader of district 5A/C, Norway’s easternmost reindeer husbandry district, is one of those who embody this valley. For a long time in this area, the border was just a line on the map, with reindeer moving from pasture to pasture, country to country, without much interference. Before the Second World War, his family’s reindeer found their lichen on the land that then belonged to Finland. Egil Kalliainen’s great-grandfather lived there until the Soviets took the Petsamo Corridor from the Finns in 1944. Egil Kalliainen’s family chose to move to the Norwegian side of the river. Today, the families in District 5A/C are all of Finnish origin. And according to Egil Kalliainen, reindeer still understand Finnish!

It is not only language reindeer have not forgotten. On the other side of the river is the territory where the females gave birth. This is no longer possible today, as females give birth in Norway. But every year, a few dozen male reindeer do as they please and smuggle across the border to take advantage of the Russian pastures that are unused since the war.

On each occasion, Norwegian Border Commissioner must contact Russian FSB border guards. Meetings are then held on the border to agree on how to retrieve these unruly reindeer in search of the tasty Russian lichen. A lichen for which the Russians will demand to be paid.

Some say that the dogs are to blame. To the Russian stray dogs, abandoned by the FSB border guards when they were transferred to the Black Sea. Which pisses off Nikel’s Russians, Larissa Vonogradova first. After working at Nikel’s factory, she devotes her retirement to collecting stray dogs. She is one of the few who shelter more than twenty of them on her retreat and donations. “The Russian state doesn’t help children, why should it help dogs?”. Paid hunters come all the way from Murmansk to shoot those who are roaming the streets.

They regularly cross the forbidden border and attack Egil Kalliainen’s reindeer. What Larissa doesn’t believe in: “Nikel’s dogs crossing into Norway is impossible, there are alarms everywhere!”. The image of the border is still a wall.

A few blocks away from Larissa’s kennel, a Russian, this time a man, also dreams, like Egil’s reindeer and these dogs, of this border river, but for another reason. This border has haunted Alexander Fedukhin since childhood, when as a boy he was recovering remnants of the war. For him, the Pasvik River is a fantasy place. Almost inaccessible because of the border guards’ ban. At the age of 61, this Russian is obsessed with searching for the bodies of soldiers who fell during the Second World War on the Litza front. Tens of thousands died when Germany tried to take Murmansk. Since 2005, he has found 70 of them, but has only managed to identify one.

Alexander Fedukhin has set up an association called “Combatants”, described as a “civilian patriotic detachment”, he walks around in camouflage jackets, and organizes excavation camps, gathering young and old who spend weeks in the summer digging the tundra to search for these ghosts of the past. With one regret, not being able to go digging and excavating along this inaccessible border zone.

Inaccessible is a word that comes back to the Russians in the Nikel region. Of course, they have free access to Kirkenes, the Norwegian border town, without a visa, if they live in Nikel. But the border itself? One end of the world. A mental border, even today.

Nikel borders a lake, which is not a lake at all, but rather a kind of extension connected to the Pasvik River. From the shore of Nikel, one could, in theory, row a boat to the village of Salmiyarvi, where a 200-metre long neck connects this false lake to the river and to Norway. But the inhabitants of Nikel talk about it as a lake. A closed one.

And that is one of the mysteries of this river. Because if you go all the way up to the end, a few dozen kilometers further north, you come across Kirkenes, a small mining town where the whole world seems to be inviting itself. Russian trawlers fishing for king crabs are moored at the quayside. They come from Murmansk, but have fled bureaucracy and float their Russian flag just a stone’s throw from the Thon Hotel and the police station.

Roman Petrichenko and Maxim Antonov are among those strange Russian sailors who spend weeks ashore in Kirkenes, waiting to go back to sea in order to fish on these huge blue trawlers, or on leave in Murmansk, to find their girlfriend or wife.

Perhaps one day, if the wishes and efforts of the political and economic leaders in Kirkenes and the region are successful, if they turn Kirkenes into the “Singapore of the Arctic” as they hope, it will be even bigger ships that will come ashore at the end of the Pasvik River, maybe Chinese ships, after crossing the Northern Sea Route, that connects Asia to Europe via northern Russia, shortening the journey time compared to the journey via the Suez Canal as global warming causes the melting of the ice pack.

If Kirkenes’ dreams were to come true, a railway line would have to be built through Lapland. This provokes opposition from Sami reindeer herders and environmentalists.

Suddenly, we are far away from a few reindeer crossing a border they don’t recognize.

After having been the scene of confrontation between two superpowers, the Pasvik River could thus become the emblematic theatre of a new battle of another kind, between two world visions.

“Pasvik, the river that tells the High North” is a recipient of  the “Robert Bosch / Reporters in the Field” grant”

Click on the image below to see the gallery with more photos from along the Pasvik River.