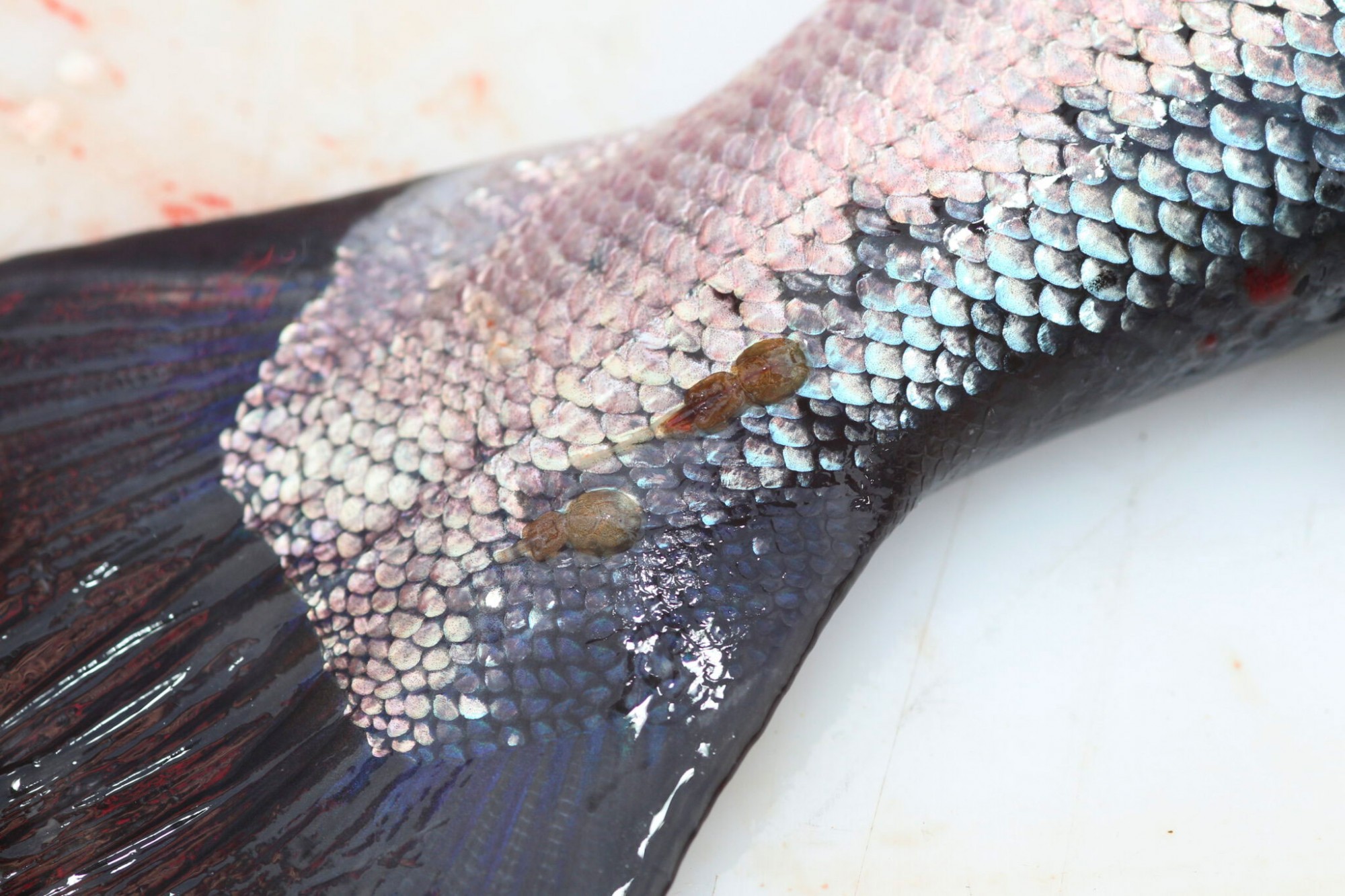 Do delousing agents used in aquaculture solve a problem or create one?

A creature just centimetre long causes major losses of farmed salmon and imposes significant costs on aquaculture. Moreover, this tiny creature poses a threat to salmon and char living in the wild, as well as other marine organisms. Why is that, and what can we do about it?
Read in Russian | Читать по-русски

Salmon lice on a salmon’s tail. The louse to the right has an egg string. Photo: Karin Bloch-Hansen, Akvaplan-niva

Sea lice are small ectoparasites that eat through the skin and muscle tissue of their host fishes. Our study is focused on Lepeophtheirus salmonis and Caligus elongatus, two distinct species that share the English name “sea louse”. Both species parasitise salmonid fishes, but C. elongatus can also use other fishes as hosts. About 10% of wild salmon die each year due to sea louse infections, many of which originate from farmed salmon. Therefore, sea louse levels in salmon aquaculture need to be kept below a certain threshold to reduce infection of wild salmonids such as salmon and char. At the same time, any negative impact de-lousing chemicals have on the marine environment must be taken into account in the overall assessment.

Traditionally, the main method for delousing farmed salmon has been to use pharmaceuticals. However, the treatment agents have often been adopted from agriculture, where they were used against other crustaceans, i.e. the same class of animals as sea lice.

These treatment chemicals have proven effective against sea lice; but concerns have also been raised about possible effects on other marine crustaceans such as shrimps, krill, and crabs.

To combat sea lice, salmon can be treated with bath treatments, either directly in the fish cages or in well boats. The salmon can also be treated with chemicals added to the feed (in-feed treatments). A general principle for treatment with the different bath pharmaceuticals is that the fish can stand a higher dose over time than the sea lice can. However, the pharmaceuticals may harm fish that are exposed too long, so the bath treatment pharmaceuticals need to be removed quickly after treatment. The duration and strength of the bath treatments are determined by veterinarians. A bath treatment can be done inside the pens with a tarpaulin around, or in a well boat, in which case the fish are transported onboard, treated and released back into the pen afterwards. When treatment is done inside the pens, the treatment solution spreads when the tarpaulin is removed. This can be problematic if the pens are close to spawning fields or other sensitive marine life. When a well boat is used, the treatment water can be dumped in better-suited areas.

The general mechanism by which feed-distributed pharmaceuticals combat lice is to inhibit formation of a new exoskeleton. Like all crustaceans, sea lice need to change their shells as they grow. In-feed treatment is provided as feed pellets to which pharmaceuticals are added. Hence, the fish are unlikely to be overexposed to the pharmaceutical, but unconsumed pellets (and faeces from treated fish) may sink and be consumed by other animals. Laboratory studies have shown that delousing chemicals used in the aquaculture industry cause lethal effects on marine species other than sea lice, and have also documented negative effects on different species at concentrations lower than those resulting from the release of delousing agents into the environment after treatment.

One question that arises is why these pharmaceuticals are released into the sea rather than being taken ashore for destruction after a delousing treatment. The simple answer is that it would be costly, but to some extent, the problem is the lack of feasible technological solutions.

These studies were financed by the Fram Centre’s MIKON flagship and FHF (Norwegian Seafood Research Fund).

A number of toxicological tests done by Akvaplan-niva at the research facility in Kraknes on Kvaløya have examined various delousing chemicals and their effects on different marine species. To be able to understand the probability for the presence of toxic concentrations in the marine environment, oceanographic modelling of the spread of delousing chemicals in the water column and down to the seafloor were combined with results from these ecotoxicological experiments. This has provided some of the first assessments of the risks delousing chemicals pose to cold-water species and ecosystems.

In general, these studies show a risk of negative environmental effects when delousing agents are used. Harmful concentrations can spread several kilometres away from the discharge point.

From this, scientists have concluded that crustaceans, and especially deep-water shrimp (Pandalus borealis), are vulnerable, as the shrimp die after short-term exposure to low concentrations.

The bath treatment agent deltamethrin (Alphamax®) had the most severe effect: treatment concentrations diluted 1:330 were still lethal to the shrimps. An ongoing project funded by the Fram Centre flagship MIKON is investigating this further, conducting experiments with different deltamethrin concentrations and varying the exposure time as well, mimicking the real-life scenario during a delousing event in the ocean.

Results from this study are not published yet, but early experiments are in line with previous results. Deltamethrin is not the only bath treatment pharmaceutical used against lice. Hydrogen peroxide (Paramove®) has been used extensively since 2013. This chemical was first believed to degrade very quickly and have little or no impact on the environment, but recent modelling and ecotoxicological studies have revealed that biological communities can be damaged after the release of hydrogen peroxide. However, the risk was smaller when a well boat was used, than when the chemical was discharged directly from cages, because of more efficient dilution of the hydrogen peroxide. A “safe” concentration, i.e. one that does not have any unwanted effects on the marine environment, was estimated by modelling and experiments and set to around 11 000 times dilution of the concentration of hydrogen peroxide used in a delousing bath.

According to standardised international guidelines, risk-reducing measures should be implemented when there is a risk of negative environmental effects. A growing number of studies show that delousing agents have effects on non-target organisms and the ecosystem, and that they spread farther from the fish farms than first anticipated. Therefore, use of these chemicals is declining, not only to protect shrimps, cod larvae, and ecosystems, but also because of the risk that the sea lice are developing greater resistance.