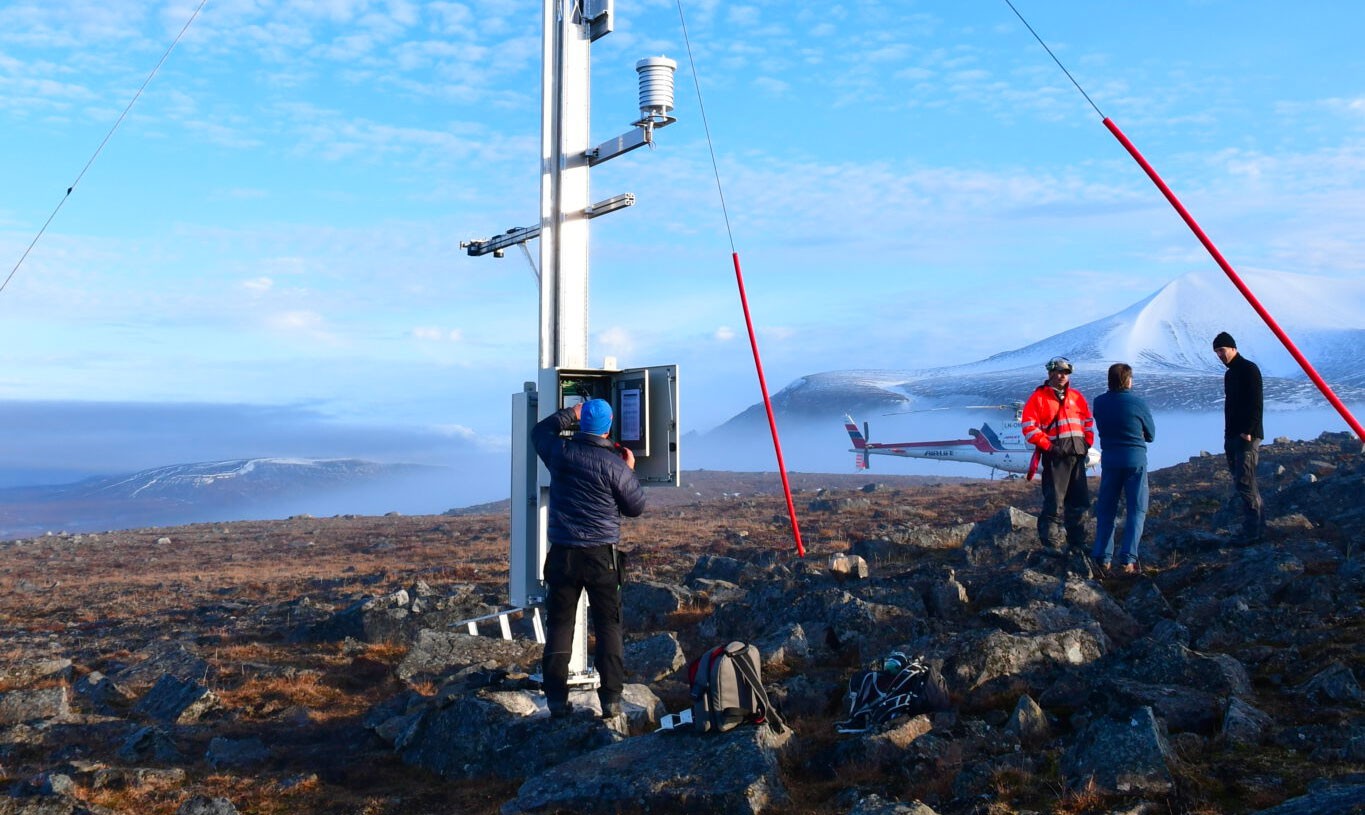 The Arctic tundra is challenged by climate change — more so than most other ecosystems on Earth. The rapid shifts to new climate regimes may give rise to new ecosystems with unknown properties. These dramatic changes call for ecosystem-based monitoring of climate impacts on Arctic food webs.
Read in Russian | Читать по-русски

Full-scale automatic weather stations are core infrastructure in COAT’s climate monitoring network. The weather stations are “hot-spots” for potential co-location and expansion of measurements to cover a wider range of variables related to both the biosphere and cryosphere within COAT and the Svalbard Integrated Arctic Earth Observing System (SIOS). Data from the weather stations can be downloaded from eklima.met.no. Photo: Ketil Isaksen

COAT is a system for long-term research with a focus on the Low-Arctic Varanger Peninsula and High-Arctic Svalbard. It combines state-of-the-art climate-ecological research with management. The focal COAT regions provide contrasts in system complexity, climate, and management regimes. COAT builds on and expands the ongoing research and long-term monitoring in both regions.

These models encompass tightly linked clusters (termed modules) of organism groups that are expected to be directly or indirectly impacted by the same set of climate and management drivers. The purpose of the conceptual models is to form a framework for data-driven causal analyses and predictions of climatic effects, and further infer how management could be effective in mitigating predicted unwanted effects.

COAT Infrastructure in the field

To cover the range of existing variation in climatic and management contexts, COAT data sampling systems are geographically distributed. The first five COAT weather stations were set up in 2018-2019, in inland regions of Svalbard and across one coast-to-inland gradient at Varanger. Five more will be set up in Svalbard in 2020-2021.

Other types of infrastructure that have been established are herbivore exclosures, networks of cameras traps and acoustic sensors, telemetry equipment, drones, and networks of small instruments that log climate parameters. These are distributed at spatial and temporal scales appropriate for estimating the weather patterns and ecological interactions of interest in the COAT modules.

A data management system is a crucial part of the COAT infrastructure. The COAT data portal will gather all primary data from COAT, providing open access to external users. Work with the COAT data portal has advanced to the testing of the first version. Concurrently, the COAT team is working with establishing data format standards, organising and documenting datasets, and developing transparent and reproducible data pipelines for activities ranging from taking field notes to monitoring state variables. An open version of the data portal will be released in 2020 with access through the COAT web pages.

The Arctic fox is the only mammalian predator endemic to the terrestrial Arctic. Over the last century, Arctic fox populations have declined steeply in the southernmost parts of their range, including the Varanger Peninsula.

The conceptual model for the Arctic fox module includes the two climate impacts paths likely involved in the population decline. Both are due to icier snowpack in warmer winters increasing mortality in herbivores. Path 1 describes how a decrease in the abundance of key prey (lemming) implies lost opportunities for Arctic fox reproduction.

Path 2 describes how abundant reindeer carrion subsidizes an increase in the population of red fox (key natural enemy), which ultimately implies the competitive exclusion of the Arctic fox. Analyses of 15 years of monitoring data have provided evidence for both of these paths (see further reading).

The conceptual model originally included two potential management intervention paths (see www.coat.no/en/Arctic-fox/Varanger). Path 3 involves reindeer management to reduce the amount of reindeer carrion by reducing the size of herds, while path 4 involves culling the population of red fox. Culling of red fox was implemented in 2005. Although it had some positive effect on the use of the area by Arctic fox, this management intervention was not sufficient to rescue the Arctic fox population, which was estimated at only five individuals in 2016 (Ims et al 2017).

The Arctic fox module has a reference group (consisting of researchers, stakeholders and management authorities) that advised the Norwegian Environment Agency in 2017 to implement two additional management interventions. Consequently, during 2018 and 2019 a total of 53 captive-bred Arctic foxes were released (path 5) and supplementary food (path 6) was provided at Arctic fox breeding dens.

This article was originally published in the Fram Forum